Plastics take matters into their own hands

Everyone remembers the scene in Star Wars in which Luke Skywalker gets a prosthetic after having his hand cut off by Darth Vader. Thirty years later, reality has caught up with fiction and it is no coincidence that researchers at the American Deka company named their prosthetic hand, "Luke". Connected to the amputee's nerve endings with electrodes, this hand, made of Teflon, silicone and polyester, is capable of complex movements and adapts to the firmness of the manipulated object. This is what makes all the difference: other articulated prosthetics have been around for several years but they often preclude the handling of fragile objects, at the risk of crushing them. A pressure sensor is inserted into the hand and is connected to the nerves of the severed arm. 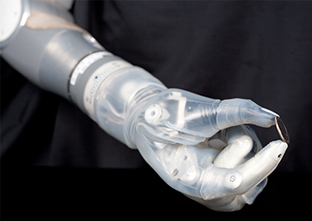 When the patient uses his muscles to transmit the information towards the prosthesis, the latter knows precisely whether the object it is handling is fragile or not.

A helping hand from polymers 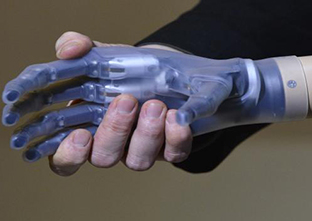 Restoring the sense of touch is one of the biggest challenges faced by researchers in the field of hand prostheses, but many teams are making good progress in this regard. Italian-Swiss academics seem to be on the right track to create a hand that can feel. To achieve this, the team moulded a variety of sensors into the silicone that comprises the prosthesis' fingers. When the patient handles an object, an electrical impulse sends the information to an electrode grafted into the tendons and so restores the sense of touch. In a test, a-patient, who had been blindfolded, could only identify the shape and firmness of the object that he touched. It may not seem like much, but it is a very encouraging result and the researchers believe that in the near future a person with such a prosthesis will be able to play guitar or tie shoelaces. 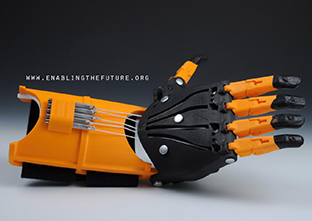 Many "cognitive" prostheses remain in the research phase. They are costly and cannot yet be mass-produced. For the time being at least… E-Nable, an American company, working thanks to the enthusiasm of its volunteers, recently made the news, thanks to a prosthetic hand for children costing less than € 50. This was made possible thanks to the magic of 3D printing. Christened the "Raptor hand", this prosthesis is printed in ABS, a biocompatible and durable material. It obviously does not have the abilities of the models mentioned earlier, but it enables its users to handle all sorts of objects. It is made up of two parts, the first is fitted onto the stump and the second is a sleeve attached to the arm with Velcro. A flick of the wrist activates elastic bands attached to the forearm, forcing the fingers to bend. The object can be easily worn and taken off. It is ideal for children!

Even better, these prostheses can be made in any colour. For the children in question, choosing the colour is an important detail when playing a superhero on the playground.

Keep an ear out

Before turning the page on prostheses, it is impossible to ignore the avalanche of technology on offer in the field of hearing aids. Although hearing aids have been around for a long time: who can forget the famous hearing trumpet! They are currently undergoing a revolution thanks to polymers. They can be ultra-connected, waterproof, rechargeable and even so discreet that you'd forget they were there. Competition is fierce, and there are over 600 different models on the market. Manufacturers have to ensure that they stand out by constantly offering ever-more new technologically-advanced products. In-ear hearing aids reign supreme in the world of miniaturisation. The idea revolves around placing a microphone and a receiver, measuring just a few millimetres, in the ear canal. The latter are moulded from a flexible and foamed polymer to ensure that they perfectly fit the ear canal and are extremely comfortable. 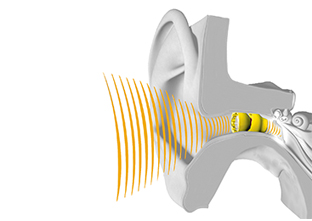 This technological marvel could not have been created without this polymer, whose composition is known only to its creators. The German Siemens company took advantage of the hydrophobic properties of plastics to develop a hearing aid that could withstand being under a metre of water for an hou.

The world at your fingertips

A blind person tapping away on their smart phone's touchscreen. This was unheard of, until a young Indian entrepreneur developed the first smart phone intended for the blind and the visually-impaired. The "Braille phone" is able to make pictures embossed and to convert any text into Braille writing. The principle is simple: the touch surface is formed of a matrix of minuscule studs whose height can be changed on an individual basis. By changing the height of the studs, the matrix creates shapes that are discernible to the touch: pictures, maps and text in Braille. The system is based on electroactive polymers that change shape or size when stimulated by an electric field. Users will soon be able to know where they are using GPS geolocalisation and move around freely, thanks to the system supporting 3D maps. There is even talk of a function enabling text photographed by the in-built camera to be converted into Braille.

Sumit Dagar, the young Indian engineer who developed the project is aiming to commercialise his smart phone in 2018, in the hope of making it accessible to as many people as possible.

Driving in a wheelchair 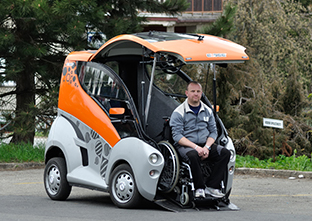 All of these innovations have one obvious purpose: to make the daily lives of disabled people easier, or to help them have the same lives as anybody else. Simply put, they aim to help them be more independent. And this is the objective pursued by a Czech company that designed a small car especially for disabled people. Thanks to its front-mounted door and its remote controlled ramp, the driver can enter the vehicle in a wheelchair, secure it to the vehicle and close the door to start driving their car from their wheelchair. Although it is fairly short, this mini car can nevertheless accommodate a passenger. It does, of course, meet all safety standards. Fitted with a small engine so that it can be driven without a license, this vehicle took years to develop as small engines often mean less power.

However, the specifications required the vehicle to be able to transport a disabled person in an electric wheelchair, a passenger and around one hundred kilos of luggage. The engineers turned to polymers for the interior and the body. And not just because they don't weigh a lot. They are durable enough to meet safety standards and can be shaped to suit all designs. The end result is surprising and, for once, heads will turn to look at disabled people for a good reason.

Made in plastic for the MAD

Technological innovations are not just aimed at disabled people, but also at people with reduced mobility, including the elderly. Growing older often comes with a loss of independence. The future of our societies faced with an ageing population has become a headache for our governments. The solution lies in home care. It is a good idea, but help must be possible to be provided to the people in question. For several years, many objects aimed at improving comfort and making daily life easier have appeared on the market. From the kitchen to the bedroom, and the bathroom, all living spaces are being examined and once again polymers have taken the lion's share of the work. Like, for instance, the step-in bathtubs moulded from a very attractive polyester. The higher-end models even have a hydraulic seat that is automatically raised or lowered. In the kitchen, cutlery and crockery have been reinvented with handles covered in an ABS, or even silicone for a better grip. 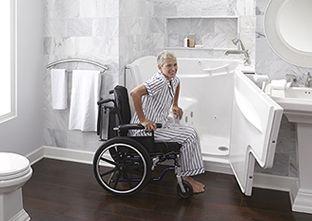 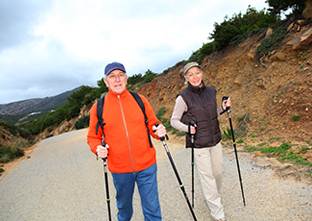 Even better, a 76-year old French entrepreneur embarked on a adventure by offering a range of clothing for elderly people. Starting from the principle that the temperature in the joints is always lower than that in the muscles, and that this difference is detrimental to the lubrication of the joint and can cause wear of the cartilage, he supplemented his clothing with portions made from polyester wadding with strong calorific properties to maintain heat in the joints. And to make his clothing more flexible, he used large quantities of elasthane fibres. Technical innovation is not just the sole preserve of the young.