With sponsorship hard to come by, being at the line-up is an achievement in itself. How did you get yours ?

Sheer luck! I was in the right place at the right time. It was 2010 and I had just completed a solo round-the-world journey in a small 6.5 m yacht. My team and I were celebrating my return in a restaurant when a man I didn’t know came over to congratulate me. That was Didier Elin, the head of the Team Plastique company. 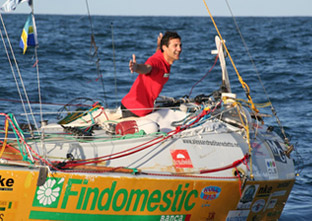 Didier Elin ! Is that really how it happened ? 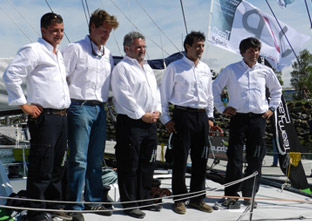 Absolutely, but I wasn’t on board right from the off. Alessandro told me about his plan to take part in the next Vendée Globe and “jokingly” suggested I might sponsor him. I was tempted but didn’t see how I could as the budget looked way beyond what an SME like us could afford. But I didn’t rule it out and said I’d think about it...I looked into it very closely thinking, that for us, as subcontractors, it could be a great opportunity to put ourselves out there and be centre-stage for once.

Team Plastique ... with a name like that, you pretty well had to, didn’t you ? 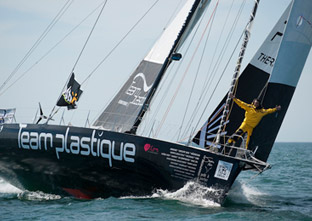 You could say that, and yet when the company was founded 25 years ago, I would never have imagined seeing its name on the hull of a racing yacht. Team Plastique is just one company specialized in bespoke thermoforming. We are the main sponsor, but other firms are in the adventure with us (see box).

Plastic is central to boat-making. Were you involved in the building side ?

Not in building it for the simple reason that we bought an existing boat. In fact it’s the oldest one in this Vendée Globe because it came out of the boatyard in 1998. But, a racing boat is precision-engineered and has to be constantly tweaked. Obviously, being in the business made things simpler. We know the materials and how to form them. Having put a few extra kilos in the keel, we had to strengthen certain structures. We also changed all the tanks. Having a rotational moulding specialist on the team made that a lot easier. Changing the engine was another big job because it meant making new mountings – plastic ones, obviously. 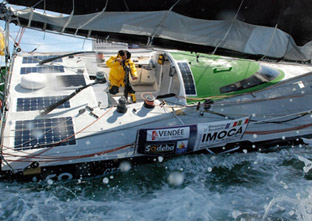 Do you also see an opportunity there to “green-up” plastic’s image ? 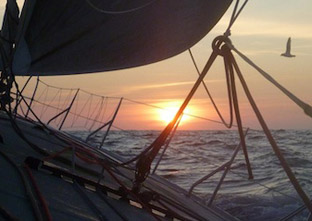 Definitely, although I despair that in 2012 we still need to justify ourselves. Team Plastique is certified ISO 14001 – the standard that provides assurance to company management and employees as well as external stakeholders that environmental impact is being measured and improved. In our firms, all waste is sorted and recycled. Granted that is an ISO obligation, but we also do it because we are environmentally-minded and know that resources are finite. Being heedless doesn’t come into it.

And what about you, Alessandro ? 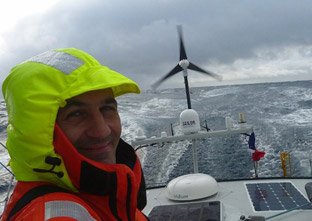 I’m sometimes horrified to come across waste floating in the waters that I sail through. Obviously, it infuriates me, but who’s the real culprit - the manufacturer or the user who threw it away? We need to face facts - plastics are no more polluting than other materials. Glass is often cited as the “poster child”. But where do you think the energy comes from for recycling? Fossil materials, of course! How long will it take a beer can to degrade down on the seabed? And I don’t want to hear about it being a great shelter for crabs, because that’s just nonsense! Manufacturers are environmentally responsible people, because it’s in their interests to be so.

And what about the "man in the street ?”

That’s another issue and one much harder to address because it’s about education and civic responsibility. When waste is jettisoned from a cargo ship, some sinks and some floats where you can see it. Unfortunately, plastic is among the latter; but so is wood which might degrade faster but can badly damage the hulls of our boats. But does anyone complain about wood? But getting back to sailors, and more especially ocean racers – even up to a few years ago, we threw our rubbish into the sea without a second thought. We thought it would quickly be gone. Then we began to realize and now we bring it all back to land. 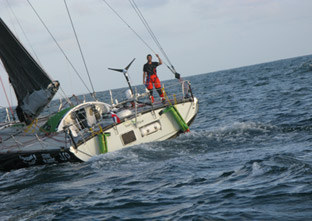 Isn’t this waste all too bulky ? 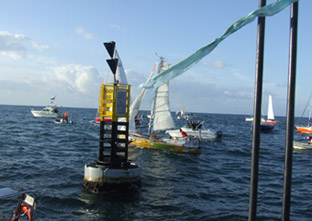 No, it actually occupies very little space. One good thing is that we no longer take bottled water onboard. Our boats are now fitted with desalination systems to produce drinking water from seawater, so no more messing around with empty bottles which may be light but gradually take over the living space. Our main source of waste is the packaging on our freeze-dried food. Once empty, these plastic bags scrunch up easily and take up very little space. And they weigh virtually nothing, so why throw them into the sea? And there’s another environment-related thing: boats now are fitted with solar panels or wind turbines so we don’t need to use the diesel-fuelled generator so much to power the electronic equipment.

Alessandro, tell us a bit about yourself 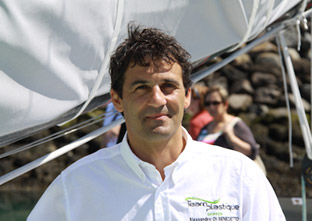 I’m forty years old and am now a professional skipper. Before that, I was a geological engineer. I discovered sailing at the age of six and I don’t think I have ever stopped doing it since then. But I’d class myself more as an adventurer than a hardcore racer. For me, the sport of sailing is more about wide open spaces and the endless horizon. This may be my first Vendée Globe, but that doesn’t mean it’s my first solo circumnavigation because I already did it on a boat one-third the size of my current one in 2010. It was a great adventure for which I won the Rod Stephens Seamanship Trophy awarded by the Commodore of the Cruising Club of America, Sheila McCurdi.

What are you aiming for in this Vendée Globe ?

Mainly, to finish my circumnavigation. Sailing enthusiasts will know what I mean. For the others, you have to know that as a general rule, only one in two boats manages the whole trip. Others often drop out due to equipment breakage. My boat is getting on a bit and unlikely to win so my plan is to take it nice and easy so as to get there safely and avoid getting into problem situations for the sake of gaining a few minutes...But I’m no Sunday cruiser, I’m well-acquainted with the southern seas, south of the fortieth parallel, and I know how costly the slightest error can be. So my boat has been tweaked even more and I know that the Team Plastique people have done a great job. So I owe it to them to go all out! Coming in under a hundred days would be a great gift that I could give them. 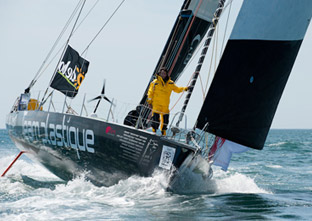 A line-up of plastics names 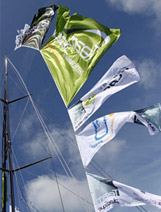 Team Plastique is not the only sponsor of Alessandro’s boat - other subcontractors are in on the adventure. They include rotational moulding specialist l’Océane des plastics, plastic boilermaker Jouin Solutions Plastiques and finally plastic injection moulding specialist Germay Plast'ic.

What does a business get out of Vendée Globe sponsorship ? 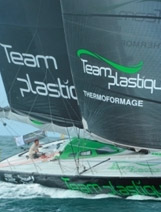 Didier Elin’s thoughts
In business terms, we’re looking for a big payback in terms of hopefully winning new market share. It gives us a great high-profile showcase for at least several months. More than giving us name recognition with the general public, we are looking to boost our reputation with customers and prospects. Working on a project like this stimulates a lot of interest. While we do work for the aerospace, motor manufacturing and food industries, we also have a particularly strong foothold in the marine industry. Since announcing our involvement with the Vendée Globe, we are no longer seen as "just" suppliers.

We now have an added value and I can tell you that is worth all the communication campaigns in the world! I would also like to say a word about our staff who are fully immersed in this programme. Most have bought fully into it and are more than willing to chip in. Cohesion and team spirit have always been Team Plastique’s strengths, and I am pleased to find that same drive going into our "Vendée Globe" project!

The Vendée Globe boats will be setting off on 10 November from Sables d'Olonne. You can track Alessandro’s progress on: http://www.teamplastique-voile.com/