Tell us a bit about the Inria Flowers Team

It’s a research centre dedicated to digital sciences and technology. Our laboratory specialises in developmental robotics. We have two main lines of research: reproducing human movement, and developing algorithms to make robots more intelligent through a heightened sense of inquisitiveness for example. In other words, it’s about teaching them to explore their environment for themselves like a very young child. Hopefully, they will one day be able to analyse a situation and deal with it appropriately. It’s a first step towards robots more in tune with their social environment. 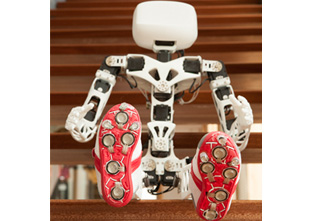 How did the Poppy project come about ?

It’s a very recent project. Two years ago, a PhD student working on a thesis on robotic bipedal locomotion was analysing everything that goes on in the human body when it moves. His aim was to mimic that on a robot. That robot was Poppy! Right from the start Poppy already had certain singular features. You can see straight off that its legs bend inwards. That’s no accident; odd as it might seem, Poppy's legs are the closest thing to human legs.

The various bits of Poppy are 3D printed. So, a fairly new concept then, but is it really revolutionary ?

There’s nothing new to computer-aided design, I give you that. However, working on a concept robot that can be made from a 3D printer is really innovative. We went down that road for several reasons. Money is obviously a big thing. It’s a technique that does the business, letting you form parts while avoiding the complexity and cost of moulds. That low fabrication cost means we can test and treat the body as an experimental variable. We can explore different morphologies as we want without thinking that we’ve just poured thousands of euros down the drain. Last but not least is that we can make our blueprints available to anyone. Anyone who wants can download and print them out.

What kind of plastic do you use ?

A polyamide material, which is actually ideal. The printed parts are incredibly fine. We work to micron accuracy and I have to say that it comes out spot on. Also, it’s a plastic with a very satisfactory rigidity for the use we want it for. It retains that extra bit of flexibility that lets us adjust it perfectly without forcing.
We also use PLA (polylactic acid). While we don’t get such fine 3D printing with this type of polymer as with the polyamide, the process costs about forty times less. So we use it for testing parts. Once we’ve come to a decision, we’re more inclined to use polyamide.

How much does it cost to fabricate a Poppy ?

Generally round about €7,500. The servo motors account for the bulk of that - they cost €5,500. Poppy needs 25 servo motors to function... We are looking at other motors to bring the cost down, but we haven’t found anything we could definitely go with yet.

Poppy is mainly for research. Was the idea of making it accessible to everyone via an online download platform in order to take that forward ?

Absolutely, and already many laboratories around the world have taken Poppy up to work on their own projects. For example, a team from Bristol wants to make Poppy's hands much more functional. Obviously, we’ll have access to their research and especially their results. Maximizing input in this way will gradually improve our robot. Poppy is just the basics; everyone is free to improve it!

Do you think one day it’ll be within the reach of ordinary people ?

It already is! Young as we are, we have already been approached by manufacturers with ideas of marketing it. That’s still a long way off. But we do know that the robot has been built in various schools and colleges. The idea for teachers is to show their students how a robot works. And it has to be said, it's still very “Toy Story”. We know that a dance troupe is also interested in it. But for the time being, Poppy is primarily confined to research, and that’s no bad thing...

How do you see the future of humanoid robots ?

Not as a servant anytime soon. Humanoid robots are great research tools. They let you delve into complex robotic problems like balance, locomotion and social and physical interaction, but also as tools to gain a better understanding of humans. Some social sciences researchers can validate their theories by conducting experiments on humanoid robots, for instance. Obviously, you can also see more everyday applications like disability assistance or intervention in challenging environments. More research is needed on this, though, and hopefully Poppy will be one of the tools that will help take it forward.

See similar articles
Read the previous article OneDollarGlasses: high quality eyewear even the poorest can afford.
Read the next article Predicting the impact of materials beyond humanitarian emergencies.