What exactly is fog ?

Fog is a cloud that is in contact with the ground.

When a cloud is driven over mountains by the wind, there is fog wherever the cloud touches the ground. But, unlike rainwater, the extremely fine droplets of water in the fog never touch the ground because they are too small.
And there is 0.05 to 0.5 g of water per m3 of fog!

So what can you do when you live in an isolated place with no drinking water, no rivers and where it practically never rains?

Collect the water in the fog!! Because fog also occurs in deserts even if there is no rain! 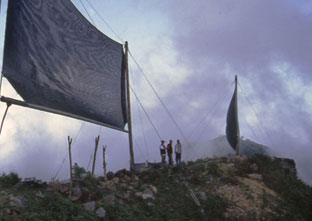 It was in Chile, at Chungongo, one of the driest places in the world, that the first “fog collectors” were installed.

A hundred polypropylene nets (or panels), 4 metres high by 12 metres wide, collect 15,000 litres of water a day on average. The water that is collected flows along the nets and then runs into troughs and is stored in tanks.

Fog collecting is a totally passive process, using no pumps or electricity. 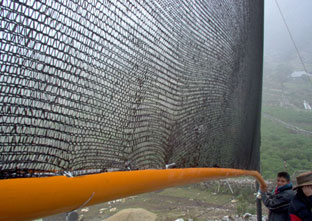 Obviously, Chile’s geographical situation (sea and mountains) favours this process considerably and the results are not so conclusive in other parts of the world.

A minimum of 90 days of fog a year is necessary for domestic use. The polypropylene mesh extracts 30% of the humidity, i.e. 17 to 42 litres of water per m2, per day.

On average, these fog collectors produce 200 litres of water a day, depending on their surface area, their position and the weather conditions.

Mineral water from the sky

When the right conditions exist, villagers have cheap water that is available immediately. “It could even be used as mineral water”, explains Yana Olivier, Professor at the University of South Africa, who took part in the erection of the first nets.

The water collected by the nets can be considered equivalent to any spring water and must therefore be treated in a similar way. 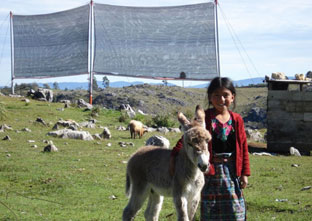 Polypropylene for the nets

The nets are made of polypropylene. This material was chosen for its effectiveness in capturing the droplets and its strength against the wind.

There are only a few manufacturers in the world and other materials tested have so far never equalled polypropylene’s performance.

And in addition, it is very inexpensive.

Who is Fog Quest ?

FogQuest is the Canadian organisation which developed these “fog catchers”. It was founded in 2000 by Sherry Bennett and Bob Schmenauer in an attempt to meet the needs of populations with no access to water (wells, rivers, pipes, etc.).

A large proportion of the staff (all volunteers) are based in Chile. Collectors were also installed in 2010 at Ethiopia, Israel and Chile.