The origins of the Playmobil

In the early 1970s, while oil prices were rising, and the price of polymers too as a result, Horst Brandstätter, owner of Geobra Brandstätter, a company located near Nuremberg in Germany and specialising in large plastic toys, asked Hans Beck, his creative director, to design a toy that would use fewer materials. At a time when non-articulated lead soldiers were the norm, the design engineer developed 7,5 cm tall ABS plastic figurines small enough to be held in a child’s hand and weighing only ten to fifteen grammes. He drew them in the same way that a child would draw an adult, in the usual way, giving it a round, neutral face with two eyes and a smiling mouth but no nose or ears, with a head that turns, "mobile" legs, and an infinite range of modular accessories.

First presented at the Nuremberg Toy Fair in February 1974, three figurines, a Red Indian, a knight and a construction worker were given a poor reception by the sector’s professionals. "Too ugly", "pointless", they said. The feeling was shared by most of the industry, except a Dutch wholesaler who placed the first order! Children were quick to fall in love when the first Playmobil boxes appeared in toy stores in the autumn of 1974. Challenge met: in three years, sales increased from twenty million to over one hundred million marks. The reason for its success? The convergence of creativity, production tools, a calculated risk, and children’s demand for role-playing games: children project their own emotions into the figurines, they can invent situations or recreate scenes despite not having lived them themselves, at a smaller scale. 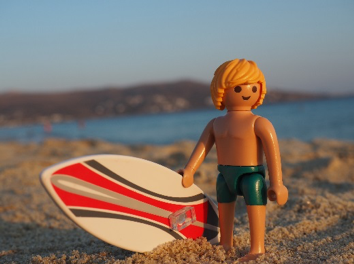 Over time, the range expanded, welcoming female figurines in 1976 (initially maids and nurses, they would soon become pirates, pilots and secret agents), followed by children and babies in 1981. Later on, the Playmobil 123 range, designed for children under the age of three, was launched in 1990. The family was now whole, and it was time to look at settings and worlds: the castles, boats, ghosts, animals, etc. created over the years would act out children’s imaginations. Playmobil now offers around twenty different worlds, from the Palaeolithic to underwater exploration, the princess’ castle and the pirates’ lair, each with ten to a dozen boxes of accessories.

Close to three billion figurines with the iconic smile have been manufactured around the world: if they could hold hands, they would stretch 3.4 times around the Earth!

With close to 30 different themes and distributed in close to 100 countries, the 500 different characters have captured the hearts of children on the five continents. Not only are PLAYMOBIL® still among children’s favourite toys, they are also a hobby for many adults and collectors. Even artists have taken an interest in the famous toys which enable them to easily make many animated films.

See similar articles
Read the previous article THE COMPONIBILI, an Italian best-seller for 50 years
Read the next article Vinyl record: the return of a giant