The doors of the Taipei International Flora Exhibition opened last November: a showcase for world horticulture. Over 30 million flowers and plants from 3,300 species will be exhibited there for six months, in 14 pavilions scattered over an area of more than 90 hectares. But the star of the exhibition is not the oceans of multicoloured flowers or the age-old bonsais but a curious building with glass walls: the new-age pavilion called EcoARK, This pavilion hosts fashion shows on the theme of flowers, to highlight the creativity of design and the latest fashion trends. An ordinary building would have been out of keeping with such ambition…From a distance, a white and silver structure about nine storeys high rises up in the urban landscape of Taipei. When you get closer, comes the surprise: the building is made of plastic, actually 1.5 million recycled plastic bottles. 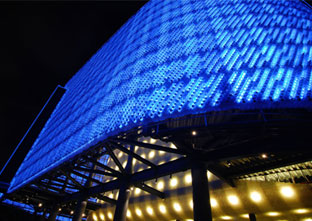 Miniwiz Sustainable Energy Development, a Taiwanese agency, designed this building, the first in the world to use recycled bottles on such a scale. Taiwan is one of the biggest consumers of polyethylene terephthalate (PET) bottles in the world, with its 23 million inhabitants using 4.6 billion of them a year. It therefore took Miniwiz only a few weeks to collect these “building bottles” from department stores of the Far Eastern Group, one of the largest business conglomerates on the island and sponsor of the project.

The facade of the EcoARK does not consist of mineral water or soft drink bottles as such. Miniwiz has recycled them to make ’Polli-bricks,’ hexagonal building bricks which fit together perfectly, like the pieces in a toy construction set. This ensures the building is perfectly watertight and strong enough to withstand earthquakes or gusts of wind up to 130 km/h, according to its designers. The insulating properties of Polli-bricks make it a suitable material for all climates. In hot weather, the air spaces in the bricks form a natural barrier against heat. In cooler latitudes, the bricks can be filled with water or sand for better insulation. However, Polli-brick is not intended for buildings subject to extreme temperatures.

Let there be light

During the day, there is no need for artificial lighting inside the EcoARK as the plastic lets light through. In the evening 40,000 electroluminescent diodes light up the EcoARK. Some, in the case of light fixtures for instance, are fitted to Polli-brick structures hanging from the ceiling, whilst others are fixed directly to the walls of the building, leaving it to the octagonal shape of the bricks to reflect the light..

Polli-bricks are made entirely from PET bottles, which are collected locally, thus avoiding the costs and impacts of transporting these “building materials.” Some 1.5 million bottles have thus been reused in this project. They provide a passive cooling system, with natural ventilation and lighting. They are much lighter than conventional bricks and are filled with a small volume of air which gives them useful thermal insulation properties. They are cheap to use given their low weight and because this reduces transport costs and also the amount of CO2 given off in this way. Miniwiz and its Polli-bricks were finalists at the Earth Awards 2010 (the “Earth Oscars”), created in 2007 to reward inventions beneficial to the planet.

A future in humanitarian aid 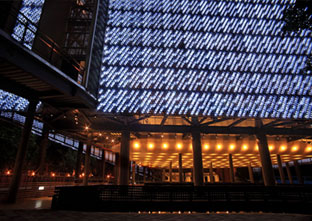 Among the other applications for Polli-bricks, their designer Arthur Huang mentions emergency shelters during natural catastrophes. “Emergency shelters generally take little account of the principles of sustainable development. They are very badly insulated and poorly lit. We think that Polli-bricks have a promising future in this field because of their unique qualities,” particularly their anti-seismic properties, due to the light weight of the resulting structure. They are particularly easy to manufacture, using limited tools and consume only a small amount of energy. They are easy to transport and can be assembled in a day. “They can be sent to a disaster area, following an earthquake for instance, and can be installed immediately on the spot”.

From sports facilities to military bunkers

Impressed by the Taiwanese Fashion Pavilion, the Singaporean government has already commissioned the construction of a sports centre with Polli-bricks from Minimiz, whilst another country has ordered military bunkers which can be dismantled, with the bricks being filled with sand. In Taiwan itself, two other projects are on course: one, a precious metals recycling plant and the other, a cemetery with nine mausoleums. 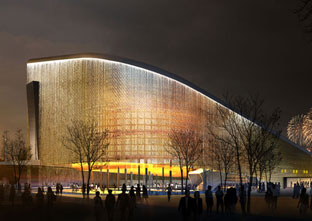 Read the part 2 Eco-Tec: building your own house in Latin America
The feature's sections
Share this article