How does one become an inflatable equipment designer ?

My associate, Gaia Hannan, and I both come from very different areas of design. Gaia studied fashion design and worked in the fashion and staging industry. She actually made her name in the field at a young age by created highly original clothes and costumes.
As for me, I studied object design and my end-of-studies internship took me to a London-based studio specialising in inflatable structures. It was while working on various projects, ranging from the smallest inflatable products to temporary or semi-permanent structures that I developed a taste for this specialisation. After frequently working together as freelancers on many inflatable structure projects, Gaia and I eventually decided to combine our respective talents and create Studio Soufflé.

What advantages does your know-how bring to the event planning industry ? 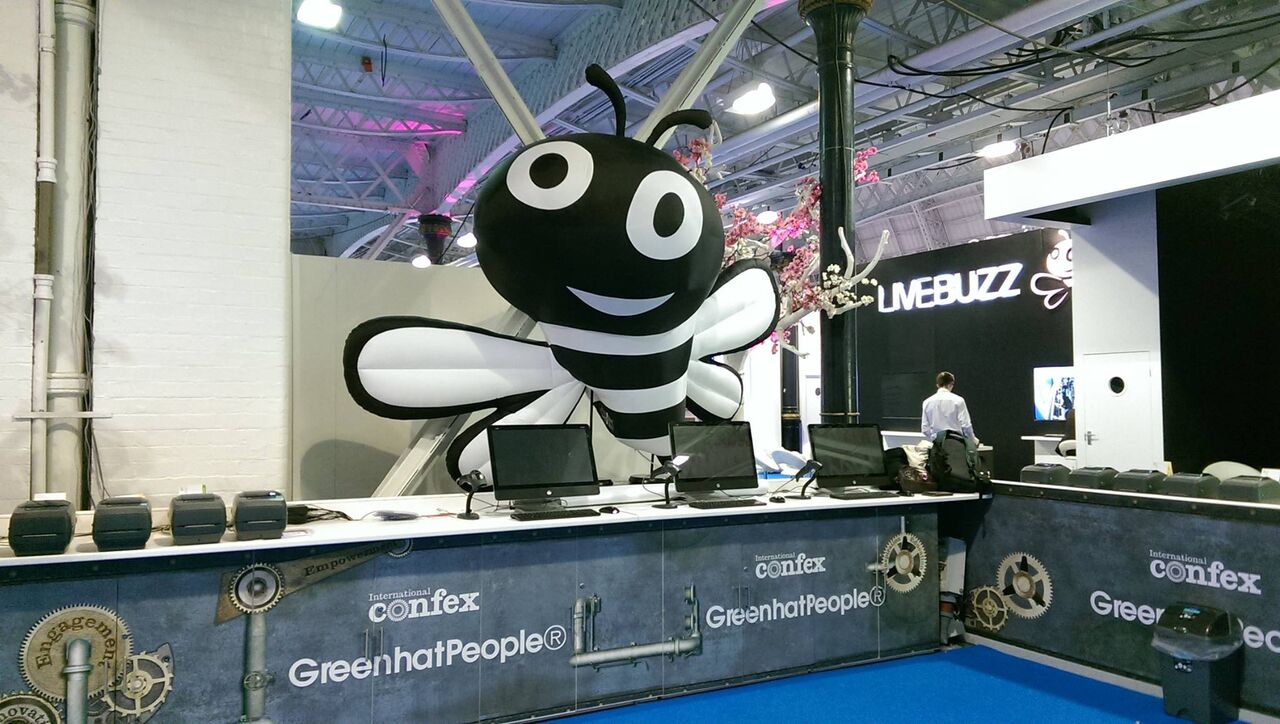 Inflatables are extremely sought-after by event organisers as they are less cumbersome and easier to transport and store than traditional exhibition booths. They can also be quickly assembled and dismantled by fewer people.
The structures that we manufacture are called "constant-air inflatables". This means that they are stitched together and use a simple fan, unlike inflatables that require more powerful blowers to keep them pressurised. This production method enables us to create highly complex and asymmetrical shapes, and even suspended objects, in a very reasonable turnaround time. Bringing a project to fruition usually takes between 6 and 8 weeks, depending on its complexity or size.

What obstacles does this type of equipment face ? 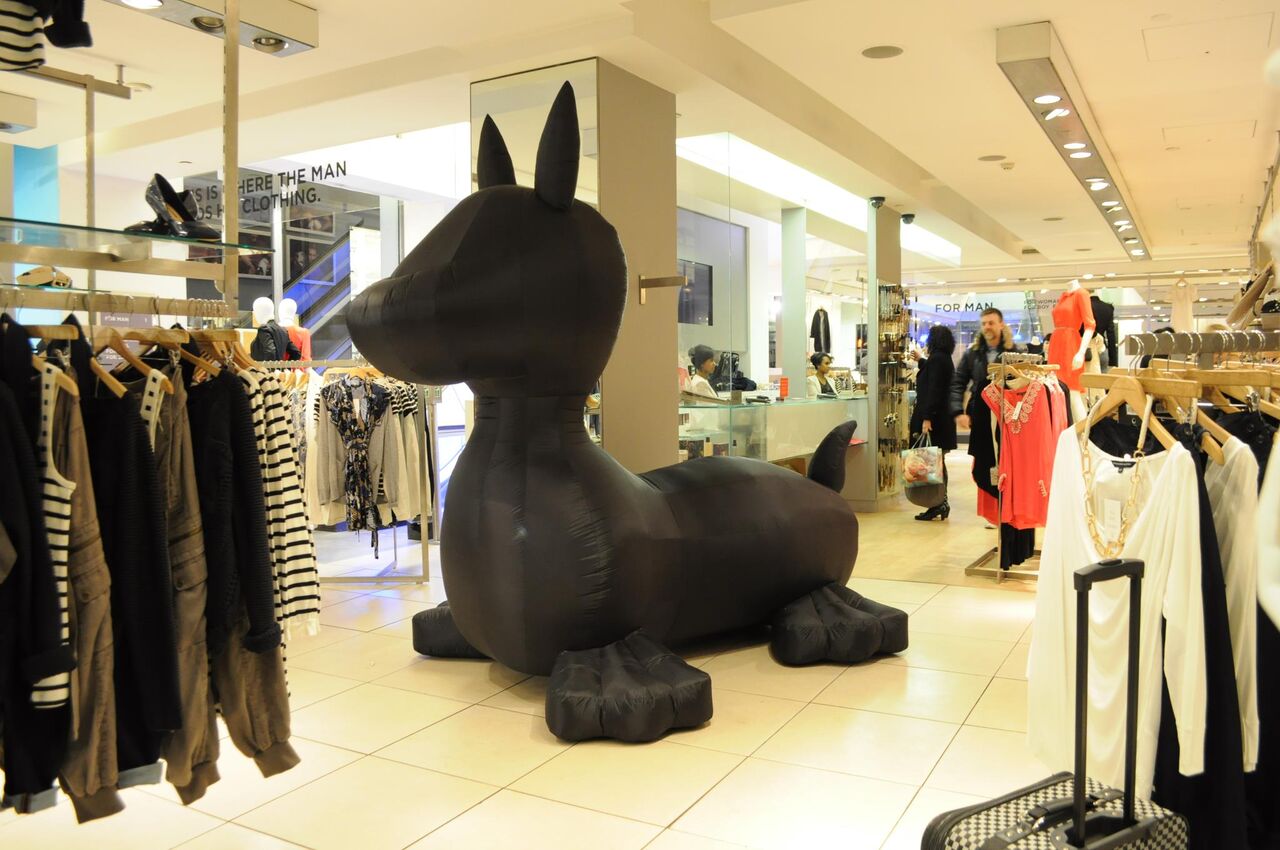 One of the main difficulties we have to contend with is that of convincing customers of the value of the "inflatable" concept when they are uncertain about its reliability. Most event and communication professionals are not familiar with this type of equipment and often ask how they work. This comes up mainly when designing tailored items. Customers ask whether the item will deflate during the event, whether it can withstand intense or prolonged use, and whether they will be able to re-use it?
In addition, many people still associate our original equipment with the ever more numerous low-end bouncy castles whose low quality, dirt-attracting and sticky materials have acquired a bad reputation.

How does Studio Soufflé set itself apart from the competition ?

It occupies a niche position in the United Kingdom's inflatables market which is particularly saturated and in which there is fierce competition on standard products, in particular due to the use of foreign outsourcing.
Studio Soufflé is one of the few companies in the United Kingdom to offer tailor-made and locally manufactured inflatable equipment.
We were able to make this choice as it perfectly fits our deliberately more "artistic" positioning. Tailored design requires quasi-artisanal manufacturing, using a wide range of materials suited to creating inflatable objects.
This strategy proved to be successful. As our reputation grows, so does our geographical reach, beyond the borders of the United Kingdom. After France and Spain, we are now creating projects in Canada, the Middle East and even Malaysia.

What types of materials do you use ?

Studio Soufflé's portfolio covers a wide range of creations. We have created large-scale exhibition spaces and modular structures for events, as well as advertising objects for political or cultural events, and accessories for television commercials.
The textile that we use the most is Ripstop Nylon. We also use a wide range of PVC membranes, in particular for structures that require reinforcement. All of our fabrics are fireproof and certified compliant with British Standards.

What are your main areas of development ?

We always try to push the limits regarding what can be done with inflatables, in order to produce the most dynamic effect possible using rounded shapes.
More specifically, we are investigating more efficient and quieter fans. With this in mind, we have improved our equipment's performance by creating multiple air vents using a single fan. We also place much importance on functionalities relating to lighting and space management.
In addition, we are constantly on the lookout for new materials that are environment-friendly, recycled or recyclable.

One of the projects that we are most proud of in this regard is the Lotus Pavilion, a travelling inflatable structure shaped like a lotus flower. It can house any type of event, and it can evolve over the course of the event by opening or closing its upper petals that form the ceiling, or by causing its five peripheral leaves, deployed to act as awnings, to oscillate with the wind. 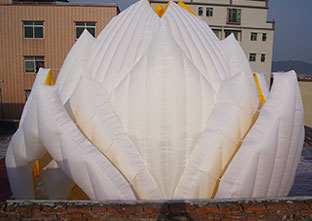