However famous and great the companies he worked for are, Lionel Scharly chose to start his own to feel the heat of things.

He named it Scharly Designer Studio and specialised in industrial and interior design. But to tell the truth, what thrills him are materials, and especially when he can free them from the limits nature has imposed on them.

This is what led him to create, with German plastics producer Bayer, new memory polyurethane foams which he roto-moulds (an unusual way to convert polyurethane) and to which he gives surrealistic surface textures: glossy, sparkling, mother-of-pearl aspects… 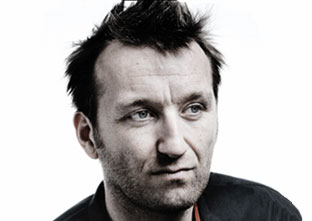 The starting point was a wish to work with innovative and environmental-friendly materials that would allow total aesthetic freedom.
This is the very definition of plastics. But Lionel Scharly did not content himself with already existing materials: he started partnerships with the French “Plastic Valley” to achieve polyethylenes that would be eligible for roto-moulding and with Raigi and Bayer for the development of memory visco-elastic foam with integrated skins that avoid using glue.

All the materials he uses are recyclable and if his products are not yet recycled it is because his company is only 2-years old and its pieces of furniture are still brand new.

Eco-conception was the motto and its implementation produced a basic module, involving a unique mould, from which the whole collection was derived: coffee table, ottoman, chair, sofa…

The resource economy does not stop at the studio door: these modules are light and combined and stacked for optimized transport: fewer trucks mean less fuel, but also less CO2 released into the atmosphere.
A module for a single chair and table, the idea is appealing, but what about functionality for a table with a round base? And what about the comfort with a chair, the back of which is a narrow tube?
To the user’s utter surprise, what looks like a totemic sculpture reveals an extremely comfortable chair for both the seat and the back.

And as far as the coffee table is concerned, it seems to defy the laws of gravity with its end plate seemingly suspended above the convex base. And yet, your China, from the heaviest to the most fragile and delicate is perfectly safe on it!

The ultimate touch is the finish: the Frankfurt Factory series comes in all colours but also in print sequined or pearly or nacreous with leather cushions

But the feat lying, as often happens, where the uninitiated can not see it, is that "working on smooth and shiny surface aspects in rotational moulding is a first and a feat!" 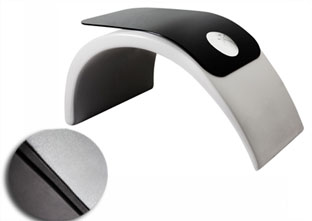 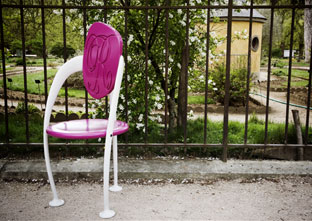 Princess Rachou is a smelling chair.

Micro-encapsulation of odours on a surface had already been accomplished. But to achieve it in volumes, you need the obstinacy of a Scharly, which in turn led to a patent.

Princess Rachou adds scent to the room, not fragrance, but smells. Two to be precise: for the pink and white version, the base gives off a masculine scent of a pine tree and the seat and back of a feminine lily-of-the-valley one. It is the combination of both which adds fragrance to the room.

And why make it simple when you can make it complicated? Each chair colour will provide its own fragrance.

But what if someone is seduced by the chair but dislikes its smell?

Lionel Scharly is crazy, but he is not stupid: he worked with a perfumer in Grasse and his brief was "Create a smell that comes out nice and sober."

The effect is generic enough to be consensual. The result is that shopping malls have already commissioned as furniture for their open areas.

Princess Rachou is also a finalist at the Innovation Awards of Paris in the Design category.

After the convex table and the fragrant chair, what was Scharly going to invent?

Lord Ri is a translucent sofa that changes colour depending on temperature, when subjected to UV or simply when it comes in contact with water.

It will hit the market in late 2010 or early 2011 because a major technical problem still remains to be solved: for now, the plastic does not lend itself to roto-moulding. But eco-design is the law, so the plastic will have to adapt!

Three projects are not enough 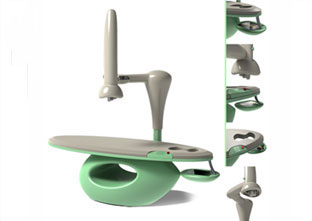 There is a fourth: Dreamtouch, the massaging table (not a “massage table” but a “massaging one” with robotic instruments doing the job).

It is made of roto-moulded plastics, of course. It has the aesthetic "à la Scharly" quality of smooth and shiny plastics. But it also has functional qualities developed by a physiotherapist, Antoine Crisan, who owes his fame to the posture and massage techniques.

Launched at the 2009 Reeduca International Exhibit, Dreamtouch has been appreciated by professionals for its innovation and design.

Research on biodegradable plastics, for what ? 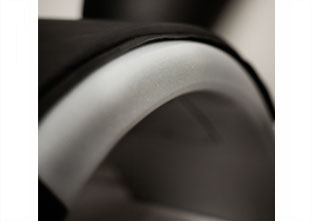 “In France, the environment is a given that everybody takes into account willingly or unwillingly. But in Russia, for example, when we mention recycling, they reply that they do not care. So, visual pollution is widespread. And like behaviour will take forever to change, I try to limit this eyesore by trying to produce biodegradable plastics. For example, imagine furniture for exhibitions or fairs that would only need to be watered for it to disappear! It would save dismantling, transport, and thus pollution!"

For now, Lionel Scharly is only into basic research. But trust him: he is of the finding type. His innovations will certainly be surprising ones!