You practice the art of artistic recycling. What type of commitment underlies the term ?

For several years now, I have been using everyday plastic objects as the raw materials for my creations. These can be bottles of shampoo, shower gel, or plastic caps of all shapes and colours.

Most of them have only been used once. My aim is to transform them into flowers, into characters or decorations to give them a new life which I hope will be even more durable!

Where does your interest for recycling plastic waste come from ?

The plastics that I use are malleable, flexible and colourful. As a child, I used to assemble things to make other things. I look at objects and imagine another use than that for which they were designed. The material that I use for my creations is inexhaustible and free. All you have to do is rummage around in the bins before the objects disappear with our other household waste or go off to the recycling plant in the best-case scenario.

I don't use glue to assemble the plastics that I recycle. I don't modify them, I don't paint them, I don't heat them and my works are also 100% recyclable. Under these conditions, can I be considered an eco-artist? It's up to the public to decide!

How and when did this calling make itself known to you ? 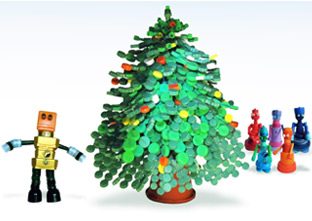 Without a doubt during my travels, when I realised the sheer amount, or rather, the pervasiveness, of plastic waste. I make no claims to making a difference. Let's just say that my work as an artist is an extension of my daily gesture of sorting my own rubbish like a responsible citizen.
After giving it some thought and associating ideas, I started recycling the plastics that I had at home as an extension of my initial thoughts on the matter. I started creating figures and animals as a response to the idea of disadvantaged children who don't get to receive any toys.

Do you plan to use other waste items ?

I already use various other types of rubbish such as plastic bags, CD jewel cases, wire, driftwood and more.
I create figurines with string, or rather with bits of boat rigging found on the beach. Actually, it's while picking them up that I realised that they were mostly made from plastic fibres. I also use the copper wiring found in old electrical devices. 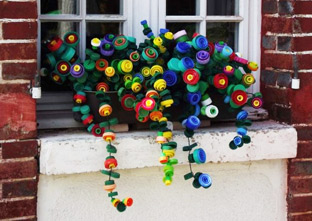 What has been the public's reaction to your approach ? 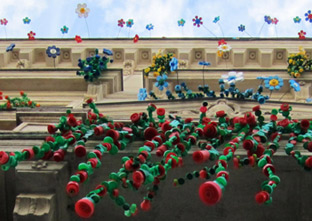 The public very much enjoys the concept. Imagine the effect of seeing 5,000 plastic bottle caps assembled into a vegetal wall, complete with garlands of flowers, hanging of the façade of 59 rue de Rivoli in Paris. Many people were surprised and enchanted by the wall, both the children who saw its fun side and adults who were better able to understand my approach.

On a smaller scale, the figurines that I have exhibited are also very popular with those who enjoy the poetic and humorous side of my work.

Are used plastic objects a good vector for creativity in your creative workshops ? 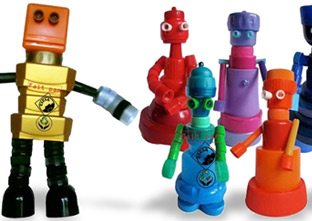 Very much so, and they appeal to everyone, regardless of the country! People love to tinker with all sorts of things, and plastics are fun to manipulate. Schools, leisure centres and works councils have all fallen under the spell of my workshops.

Which of the projects you have created over the past 12 months has been the most notable ?

Although the concept itself is a couple of years old, my favourite project was the "Vegetal wall" created in 10 days in front of the public in a shopping centre on the outskirts of Paris, as part of an event called "A gesture for the planet".
In the end, although the project in itself is static, the "Vegetal wall" is very much alive, travelling from city to city and from one exhibition to the next. It has been used in feature films and is currently being exhibited in northern France until the 9th of December 2013. Some of my smaller figurines are currently exhibited at the "Cité des enfants", the children's area of the "La Villette" Science and Industry Museum in Paris.

What does the future hold for your approach ?

After the next creative workshop I'll be hosting at the Alliance Française language school in Bangkok in February 2014, I'll be coming back to France to exhibit some of my work and lead more workshops for children and adults after having received requests from municipalities and works councils.
The workshops allow me to share a little of the creative savoir-faire I have acquired in the artistic recycling of discarded plastic items. I personally have no other solution for recycling plastic than this educational and artistic approach.