Cross country skiing is actually made up of two separate disciplines: classic and skating. Can you explain the differences between the two ?

The classic technique is the traditional cross country skiing technique, which is practised in the axis of the track, along two parallel trails that have been previously traced in nature. Specialists also call it the "diagonal stride" because they alternate their footing between one foot and the other. A bit like a sliding walk. As for skating, skiers are constantly in motion, approximating the movements of a speed skater. This practice is sometimes called "Freestyle" and is practiced on a smooth surface. The two disciplines are practiced at competition level.

Is the equipment different for each discipline ?

Yes, the differences are actually quite significant. In classic style, the initial propulsion phase requires a no-wax ski. This system is located in the middle of the ski (1/3 of the length, in the centre), and is created either by applying grip wax or through a mechanical system such as scales (pressed or machined into the ski base). Skating does not require an initial propulsion phase with neutral momentum, and the whole surface of the ski is used for sliding. The skis for this discipline also need to be stiffer and shorter for improved manoeuvrability.

Are the same materials used for both ? 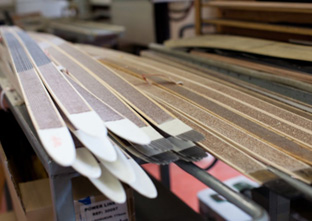 The same materials are used in skating and classic, but in different quantities and distributions. The differences are mainly based on the use for which the skis are intended. We therefore have to differentiate between racing skis and those designed for the general public. We are increasingly using carbon fibre (primarily unidirectional) to create the reinforcing layer for the former type of ski, usually associated with an Aramid- or Kevlar-based Nomex type honeycomb core.
However, although wood is still used for certain consumer models, it is gradually being replaced by polyurethane-type foams which are much lighter and have some very interesting properties. Thermoplastics such as high-density polyethylene are also used for the sliding surface but also for the upper surface of the ski which serves as protection and decoration.

Have these new materials revolutionised your industry ?

It is an evolution rather than a revolution. Synthetic and composite materials have long been used in the manufacture of skis. However, changes in the nature, quality and price of such materials have enabled us to come up with ways of increasing performance while significantly reducing weight. Most innovations are based on such new materials and the ways in which they are incorporated into the skis.

Which direction is research currently taking ? 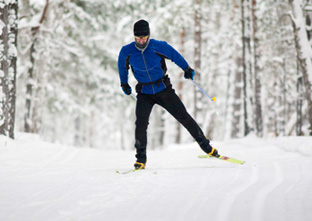 We are working on two major areas: mid-range skis which we are seeking to make more accessible, less technical but just as powerful; and high-end skis for which we are testing many materials in order to achieve the best possible transfer of energy from skier to snow, and to provide the best possible glide.
We are currently testing new materials for the cores and reinforcements, making the most of the latest innovations from Formula One and the aerospace industry. We are also testing new formulations of polyethylene for soles. Every winter, our team tests a dozen new materials for soles and the surface appearance of soles. If the tests are successful, they are used on the World Cup circuit (e.g. with Jason Lamy-Chapuis). The most versatile soles are then used in commercial ranges of soles.

Salomon also manufactures shoes and bindings. Is this an advantage in your business ? 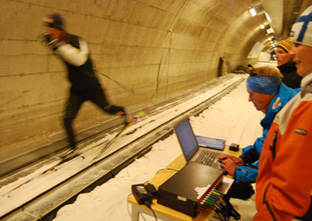 It is actually very important. We believe that ski, binding and boot form a whole which should be completely attached to the skier. Our shoes are particularly suited to our bindings and our skis. We are the only manufacturer in the field of Nordic skiing to have fully mastered the design and manufacture of all three products.
In creating the boots, we start at the foot and work our way outwards for a very simple reason: to ensure comfort. First, we study the volume of the footwear and build the boot by stacking materials, mainly polymers, in the form of foams, textiles, injected parts and composite parts. A good boot should be comfortable (unlike in alpine skiing, Nordic skiing races can last several hours), but also firm enough to transmit energy to the ski and provide the skier with the maximum possible amount of information.

Is the boot also a source of innovation ?

Of course! Actually, we are the first to launch a new boot with an innovative architecture in the world of cross-country skiing this year. It is a liner-type construction with a carbon fibre shell. This is a world-first which is the result of months of research and testing. We are very proud of the result. The boots were immediately adopted by some of our best athletes. Some of our athletes will be wearing them to the next Olympics. Obviously, we hope to see them on the winners' podium! Thanks to this new construction, we have practically halved the weight of our boots. It's a considerable advantage given that each foot has to be lifted at least 10,000 times per competition.

Does that mean that you are constantly on the lookout for new materials ? 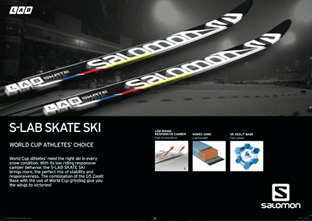 I previously evoked the concept of constant change and the answer is an extension of that notion. We take a close look at what the industry is producing, and in some cases we work with our material suppliers. However, we are not the automotive industry and our volumes are sometimes too small to have materials designed exclusively for us.
We have products for which materials and processes are closely linked. One of the areas on which we focus our work is the assembly of various materials. Research on glueing techniques is another such area to which we devote considerable time. We test new materials and new processes in our laboratories and in the snow. We have a very strict qualification process to ensure the best performance and the best quality in a sometimes very hostile environment.