What is the Designpack Gallery in a nutshell ?

The Designpack Gallery is a space for promoting the art of packaging design.

It is located in central Paris, close to the Louvre and the Comédie Française, and is the world’s first large public space - it has a bookshop, gallery, exhibition and conference room - dedicated to nothing but packaging design.

I started out as a designer specializing in packaging design, but became increasingly involved in consulting, writing books and newspaper articles, organizing events and conferences on good practices in innovation and sustainable development in packaging.

That’s how the idea of the Designpack Gallery came to me: why not bring all my passions and activities together under a single banner in one place!

But you haven’t give up designing altogether ?

No, absolutely not! My branding agency “P’Référence – Dynamiseur de marques”, founded 25 years ago, is even bigger on the French packaging design scene now, but what our customers want has changed over the past decade.

The agency has flourished, because we must have created over 10 000 products since 1985, and it is still powering ahead.

But with the crisis, the economic slump and the shake-out in the industry we are now taking on more of an advisory and blue-sky creativity role (particularly in eco-design) than design to refortify and maintain brand capital.

Today, we are still seeing manufacturers putting different products of different brands in the same bottle just to rationalize things. But a product’s identity comes from the power of its packaging. We have entered an era of uniformity: there’s comfort in the fact that everything looks the same, but the innovation’s gone.
And packaging design is the poorer for it.

And yet, packaging looms larger than ever in our daily lives ! 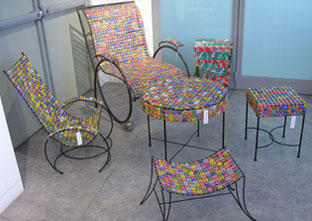 Packaging is public enemy number one at present! But you can’t do without it, and contrary to popular belief, proper packaging is an insurance against waste. For example, it helps keep food fresh longer, and ensures that it is safe for us to eat.
By looking at packaging in all its forms, the Designpack Gallery gives an opportunity to see it from a different angle, such as through conferences on responsible, environmentally-friendly packaging design.

It is also the only place in France that brings together all these activities around packaging, so it includes a small space focused on objects created from reclaimed packaging, whether wood, glass, plastic, aluminium, metal or paper.

It’s an impressive collection of craft and creative approaches that has a near-nil environmental impact. Above all, every one of these objects is the result of painstaking, high quality work. So much so, that you forget they are made from recycled waste!

That's where you got the idea of an exhibition exclusively about packaging waste ?

Yes. The growing influx of art objects created from recycled packaging made me want to mount an exhibition devoted just to this new form of expression, this new art form.

The exhibition titled "R for Recycling, packaging’s second life”, runs until 04 June at the Designpack Gallery and showcases the works that many artists and craft workers have created from packaging waste .

Artists from all continents demonstrate unbounded inventiveness in turning the stuff we throw away - cans, brick packs, bottles, etc. – into ingenious and unexpected new objects.

We are at the dawn of a new art form, and also a whole new era in recycling, which involves giving a second life to the rubbish that clutters our lives: this is what I call junk design.

Are your future plans going the same way ?

I have lots of plans in mind ... all of them with the idea of promoting recycling. We are currently organizing what will be called "recycling avenue" in the "Palais Royal-Musée du Louvre" metro station: it will be a permanent exhibition to understand and learn about recycling.

We can recycle, we should recycle, but how do we recycle?

It’s not just about helping people do the right thing; we first need to explain to them why they should do it, to educate them.
This is also what I am doing with the UN, advocating education to help preserve our planet.

I often quote Lavoisier's dictum that “nothing is lost, nothing is created, everything is transformed”, because I see recycling as having two forms: industrial, by which I mean, taking an object and transforming it industrially into a new primary material (a clear economic interest), but also recycling through re-use, designing products to have a second life without starting over from scratch. This is also a form of recycling. Re-use means that you really have a minimal impact on the environment. It’s a really exciting scenario for plastics.

Sustainable development is a really big thing for you. Are you jumping on a bandwagon there ?

And where does plastic fit into all this ?

As I said before, it's not just about recycling material, and plastic adapts very well to re-use.
It has a great future in this field, you just have to ask the right questions!

It’s a material that you can use to create anything, in any form, and the fact that it is lightweight yet strong, functional but funky, makes it more re-usable than other materials.

You’re also behind an exhibition that features plastic bottles in a pretty remarkable way? 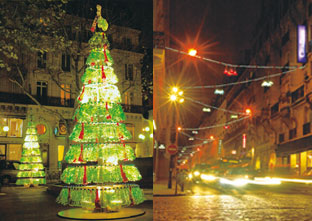 Yes, in partnership with Paris City Council and Coca-Cola, we’ve set up an operation called “recycling, a brilliant idea” that consisted in lighting up selected streets in the historic centre of Paris using lamps made from reclaimed multicoloured plastic bottles.

We used 1,000 bottles for the 22 LED fairy-light chandeliers that decorated the streets and another 1,300 to create Christmas trees set up on a nearby square.

The operation was such a resounding success that it’s going to become an ongoing thing and exported to other countries.

And even more than making people aware about recycling during a period of high packaging production and waste, it really showed them that together we could promote an artistic use of reused objects.

And I think we got across the message "Do your bit to sort it. Make packaging into a new resource!”

1970 Age nine, won a design competition launched by UNESCO on the need for education to protect the environment
1985  Set up the P’Référence design agency
1999  Wrote his first articles and gave lectures on the need for “green” packaging design
2003  Involved in setting up the INDP (French National Institute of Packaging Design). Is now its president
2006  Starts writing and publishing a collection of books on packaging design
2007 Writes the book “Eco-design, chemins vertueux”, which has won the European Environmental Design Award
2008  Establishes the Designpack Gallery
2009  Appointed packaging design expert to the United Nations Industrial Development Organization (UNIDO)
2010  “R for Recycling – packaging’s second life” exhibition