A bright idea: use a plastic bottle as a light bulb

If ever there was a brilliant idea, this is definitely it: the Litre of Light is a project to turn used plastic bottles into light bulbs.

This visionary idea was dreamed up in 2002 by Brazilian mechanic Alfredo Moser, who was tired of having his workshop plunged into darkness at all hours of the day due to long power cuts. So he took a 1.5 litre PET bottle, filled it with water and a little bleach to prevent bacteria formation, cut a hole the right diameter in his tin roof , sealed the bottle in - and there you go! A child’s play process of using water refraction to flood a room with daylight. Very soon, every roof in Alfredo’s neighbourhood was sporting the same bottle-lights! 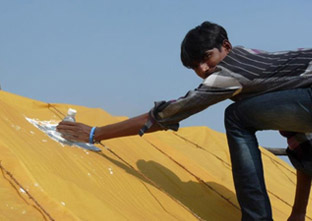 A liter of light 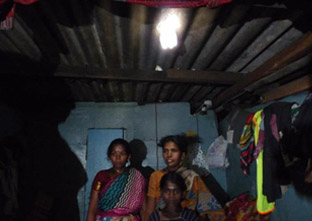 Although invented in Brazil, the "bottle bulb" idea has been developed in the Philippines. Filipino businessman Illac Diaz is busily fitting them for tens of thousands of his country’s poor families and is hoping to have lit up a million homes by year-end through his MyShelter foundation. His Isang Litrong Liwanag, Filipino for "a litre of light", project aims to bring light into the tin-roofed shacks of Manila’s shanties. Even in daytime, many people live in gloom because they have no mains power, and the, often windowless, makeshift dwellings get no natural daylight making it impossible to work, let alone allow children to study or read.

Lighting everyone can afford 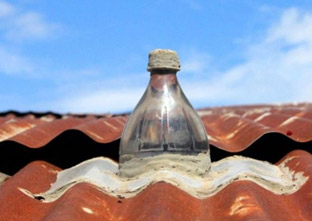 With this system, a bottle screwed into the roof gives light, the equivalent of a 50 watt bulb, enough to light up a room in daytime without using electricity. On top of that, it also saves 17 kilos of CO2 a year. This easy-to-fit, low-cost concept really works. With just one litre of fresh water and a plastic bottle retrieved from rubbish, the equivalent of a standard light bulb can be fitted in less than an hour and will last for 5 years at virtually no cost. "It’s a people’s revolution using a simple and cheap technology," proclaims Illac Diaz. And it’s a bright idea that has spread like wildfire around the world thanks to a clip posted on YouTube and effective viral marketing on social networks.

Lighting up the world

More than 25 000 bottle bulbs have been fitted in shanties on the outskirts of Manila and about 100,000 in the second largest city, Cebu. And the idea has now taken off in India, South Africa, Vietnam, Nepal, Mexico, Colombia, and as far as the Pacific island of Vanuatu. And while it certainly departs from Al Gore’s agenda of uniform clean technology development like wind turbines and solar panels in all regions of the world, “that,” observes Illac Diaz "comes at a high cost and not many people actually benefit." His work has now been showcased by the United Nations. 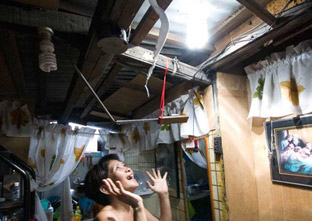