Plastics in agriculture: why ?

We often talk about a farmer’s wisdom, and plastics use is a pretty in-your-face example. Where did it come from? Oddly, no-one knows for sure, but it’s suspected that a farmer who had had enough of the need for constant re-mulching of his tomatoes had the idea of using plastic sheeting instead. This would have been in the 1950s, when agricultural plastics were still a thing of the future. It did the job, and other farmers followed suit, to an extent where hundreds of thousands of tonnes of agricultural plastics are now in use across Europe. Mulching aside, most are used for covering greenhouses, silage or wrapping haystacks for fodder. 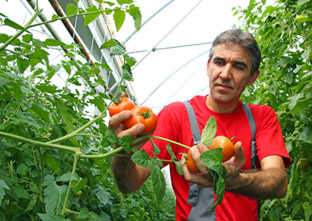 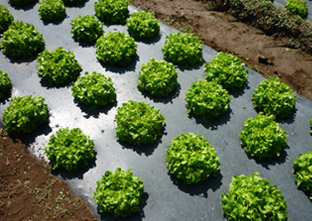 Gardening enthusiasts know all about mulching – the technique of spreading a layer of natural or synthetic material on the soil surface around plants. It not only protects against unpredictable weather – holding in moisture by reducing evaporation, for example, but also helps keep weeds at bay. Mulching is anything but a new technique. Market gardeners have long protected their crops. 50 years ago, they did it with straw or other organic waste like wood chips. But it was a laborious, back-breaking job. In blunt terms, the advent of plastic films revolutionized vegetable and fruit growing! Farmers now swear by them. Not only have plastic films greatly simplified their lives, but also helped them to improve the look, smell and taste of fruit and vegetables and – to top it all - significantly improved farm incomes. Plastic films are now first choice for almost all crops, be it lettuce, tomato, strawberry, melon or what have you. 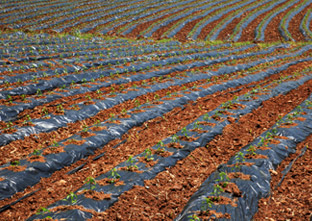 Once laid down, plastic mulch will last for months without having to be re-applied. It is extremely effective in inhibiting weed growth without herbicide use, sparing the water table tonnes of chemicals that would otherwise leach into it. Its imperviousness is also a big plus, helping to retain moisture in the soil and saving millions of cubic metres of water, in the same way as with herbicides. These plastic films also protect the crops from soil contamination. Obviously, the soil provides good drainage but it also has an unwanted side-effect: bury a young plant under too much of it and you will stunt its growth or affect its taste. The reason why the fruit and vegetable racks in your local shop can offer such perfectly formed strawberries and courgettes is largely down to plastic!

A real market for industry

Today’s mulching films have moved on from tweaked sheeting. Agriculture is a huge market opportunity for the plastics industry although still, often, black, plastic mulch films bear little relation to plain old bin liners. Most manufacturers focus hard on them, endlessly working to come up with the perfect material. It has to be the thinnest possible to be lightweight and easy to place but strong enough not to tear when removed. Made of polyethylene, mulch films are extremely thin - less than 100 microns or 1/10th of a millimetre thick. The limit seems to have been reached, because while polyethylene films can be made even thinner, they would be a bit more delicate, and especially much more difficult to handle during removal, when they are apt to tear. This is why the industry is currently looking into new thinner but also more robust materials. 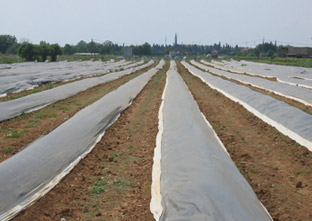 You don’t need a weatherman... 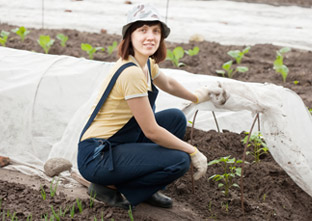 With plastics use becoming the norm, farmers are much better able to cope with unpredictable weather. Welcome to climate control! If only! Market gardeners are the only ones with that ability. Mulching films are now often backed up by polytunnels – films suspended just centimetres above the soil to protect crops from bad weather. Storm, hail, wind, pounding rain... modern growers know that their crops are safe from bad weather. At double the thickness of mulch films, polytunnels are more robust. And white or clear films also act as greenhouses, retaining the heat and light needed for good plant growth. And because good things never come alone, the very fact of being suspended means that polytunnels allow rain water through a drip tube system to "inject" crops directly at the root, thus avoiding rot. And that’s a saving in plant health products, which is a boon not only to farm productivity but also for the environment. 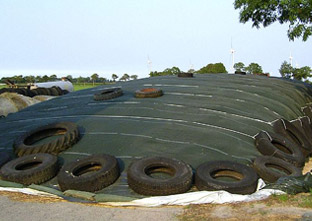 We’ve all seen them: at the edge of fields, those big plastic sheeted mounds of who knows what. Not the prettiest of sights, it has to be said. But don’t take it out on farmers, or rather breeders, because this stretch wrap plays an essential practical role in their business, helping to keep fodder and forage crops like maize dry as livestock feed. Stored away and protected from water and light, they stay fresh and protein-rich. Come winter, cattle can continue to feed on natural produce, so livestock farmers no longer have to enrich their animal feed with dietary supplements that consumers may not welcome. These poly tarps are also the same films used to wrap haystacks and for exactly the same reasons. And for a last word on silage, some rigid grain silos are made from reinforced polyester. Plastic and agriculture clearly go together.

We saw earlier that plastic films are used a lot for growing tunnels. They’re also used extensively in the manufacture of their "big brothers" - greenhouses. The old wrought iron greenhouse fitted with huge panes of glass now belongs to history books. Glass is heavy, fragile, and costly..Today’s “glasshouses” are made of polycarbonate, a material with almost glass-like light transmission properties. In the Netherlands – unbeatable in this kind of growing - greenhouses are shaping the landscape, and when used for flower-growing, the play of colour and light they produce stirs poetic leanings in even the most prosaic of us...That being said, greenhouse cultivation has made Holland a leading European fruit and vegetable producer with more than three million tonnes a year. In 2011, it was the biggest European cucumber producer (440 000 tonnes), second largest for sweet peppers (345,000 tonnes), and Europe's third-largest tomato grower (660,000 tonnes). 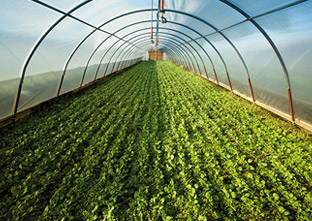 The list of agricultural uses for plastic just goes on: PVC or polyethylene pipes for irrigation and drainage systems or heating greenhouses; extruded polyethylene canopy-style bird and rodent netting; moulded polystyrene containers of all kinds - tanks, troughs, etc. and even recycled plastic for buckets, crates and pots. As always, low-cost, easy-to-use and lightweight plastics have proved themselves essential if not indispensable. Without them, farming would be a much harder, and less profitable, business. They are a boon for consumers, too, because not only does using plastic give higher yields but also regularly-shaped, defect-free and oh-so-tasty fruit and vegetables.