Since 2013, aquaculture has surpassed fishing for supplying the planet with protein from the sea. According to the FAO, we consume 10.3 kg of aquaculture products annually, compared to only 9.7 kg of marine wildlife. For a good reason, the food-to-production conversion rate is particularly high, and aquaculture is therefore an essential source of animal proteins.
To meet increased demand, the aquaculture industries have to face a double challenge: increase productivity while avoiding environmental and health issues found in the initial phase of their development. Pioneers in this respect, the Nordic champions of salmon farming have already developed innovative solutions taking their inspiration from offshore techniques in which plastics are, once again, put to good use. 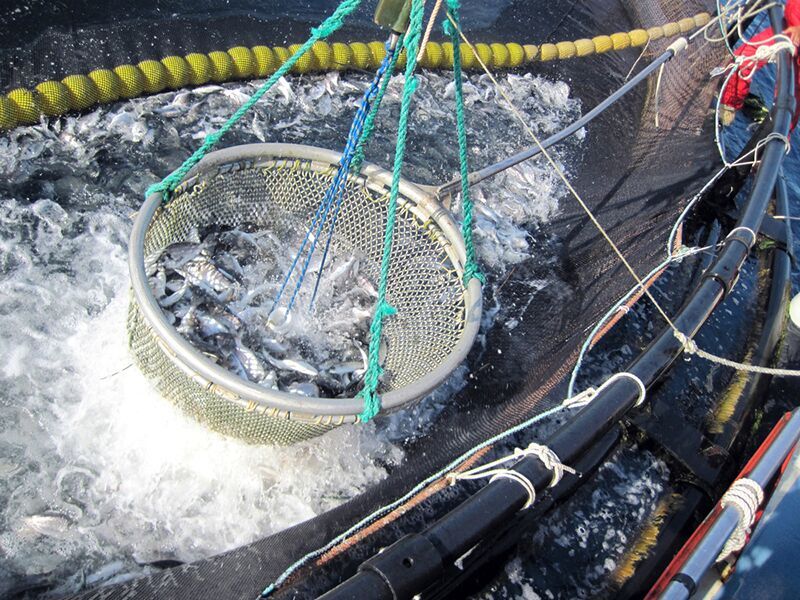 A pink gold mine in the land of black gold

Far removed from current food issues, here is a feast that has contributed to the success - and the problems, of intensive aquaculture: Atlantic salmon. Earning first place on French tables and in Japanese sushi, and third place in Europe, this fish is the third treasure, after gas and oil, of Norway, a country that has pioneered numerous innovations in aquaculture.
Initially practiced in fresh water to produce smolts, juvenile salmon destined to repopulate the coasts, the 1970s saw aquaculture move towards farming in enclosures immersed in fjords. With a growth cycle of 20 to 36 months and a yield of one kg of fish for 1.2 kg of feed, salmon soon came out on top as an advantageous alternative to fishing. And a real goldmine when processed into fillets.

Salmon farming soon spread to all coasts of the Gulf Stream, from Scotland to North America, and all the way to Chile. Fishing companies all over the world, with Norwegians at the forefront, developed many different solutions for adapting aquaculture facilities to the various farming environments. 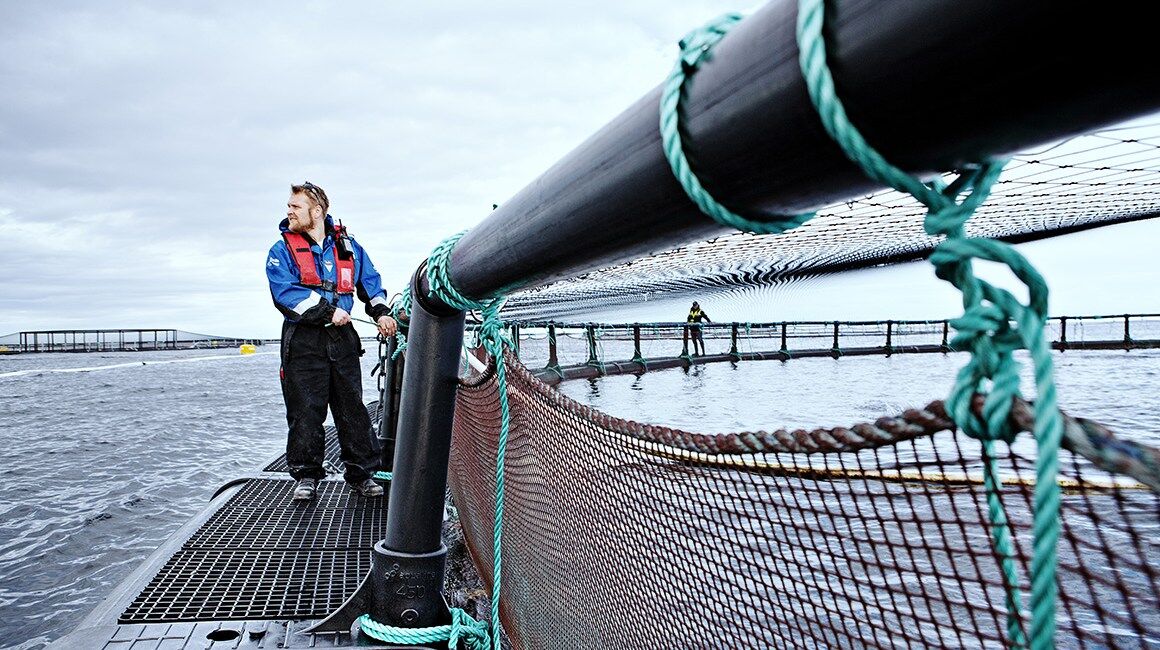 In 1974, the AKVA Group launched Polarcirkel, the first circular plastic cage.  Being modular, and therefore extensible and mobile, it could be used in many marine environments, beyond coastal waters, thanks to its flexible rings and tubes made from high-density polyethylene (HDPE) filed with polystyrene foam. Unlike more rigid rectangular structures, the circular cage combined with conical nets creates a gyratory current conducive to salmon mobility, oxygenation and the elimination of their droppings.
Perfected by the competition, with the introduction of other plastics, such as PVC in tropical areas, this type of plastic cage remains the basic module used by most aquaculture farms. It enables around 80 species of fish to be bred in captivity, the first of which, Salmo salar, still accounts for half of all production.

Synthetic fibres move up to the net

For around twenty years, open water cages were a good compromise between the requirements for confinement of aquaculture species, and the dispersal of droppings. Being on the front line in this respect, fishing net manufacturers had to adapt their know-how to the specific constraints of aquaculture: knotless mesh, a factor of animal well-being, buoyancy, resistance to attacks linked to the marine environment and predators, etc.
Polyamide fibres such as nylon and polyester have come out on top because of their versatility: a satisfactory resistance due to their elasticity and light touch under the movement of the fish. For the last decade, the designers have been recommending Dyneema-type threads, made from ultra-high molecular weight polyethylene (UHMPE). 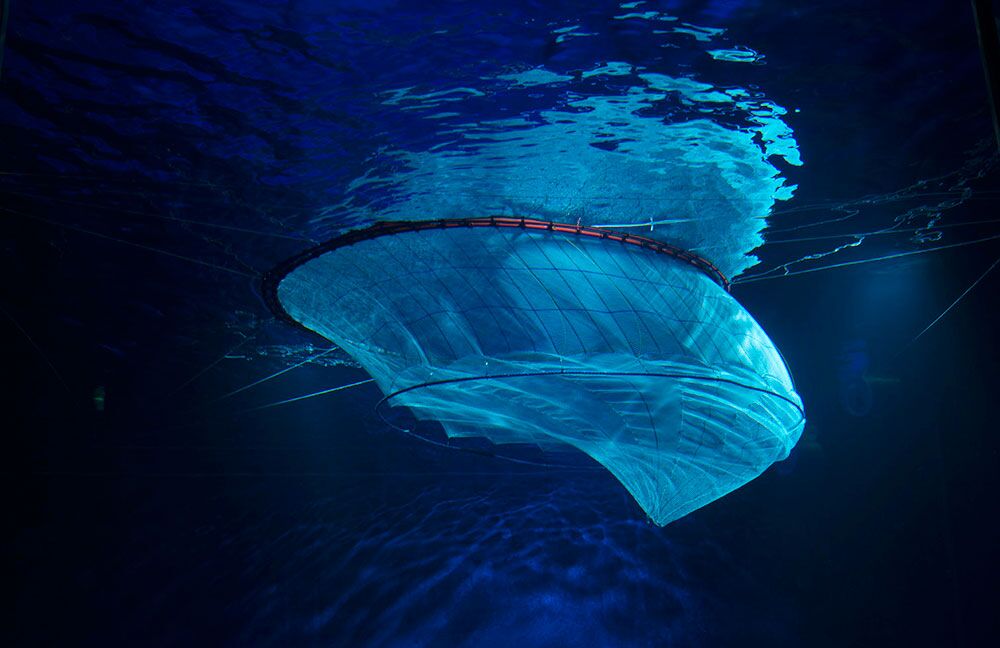 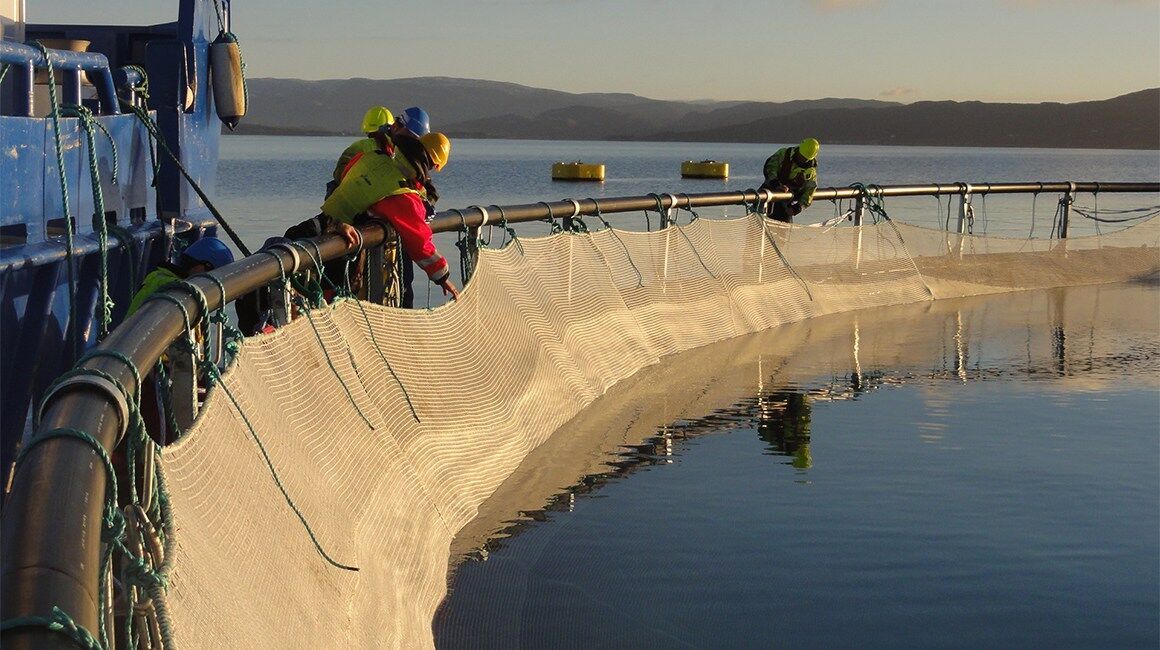 Lighter, but more rigid, they mainly offer higher resistance, which is particularly sought-after in rough seas and against predators.
More recently, 3D modelling and simulations of the behaviour of flexible cages have led manufacturers to make their cages using nanostructured multi-fibre threads or even mixed meshes designed for specific aquaculture techniques. 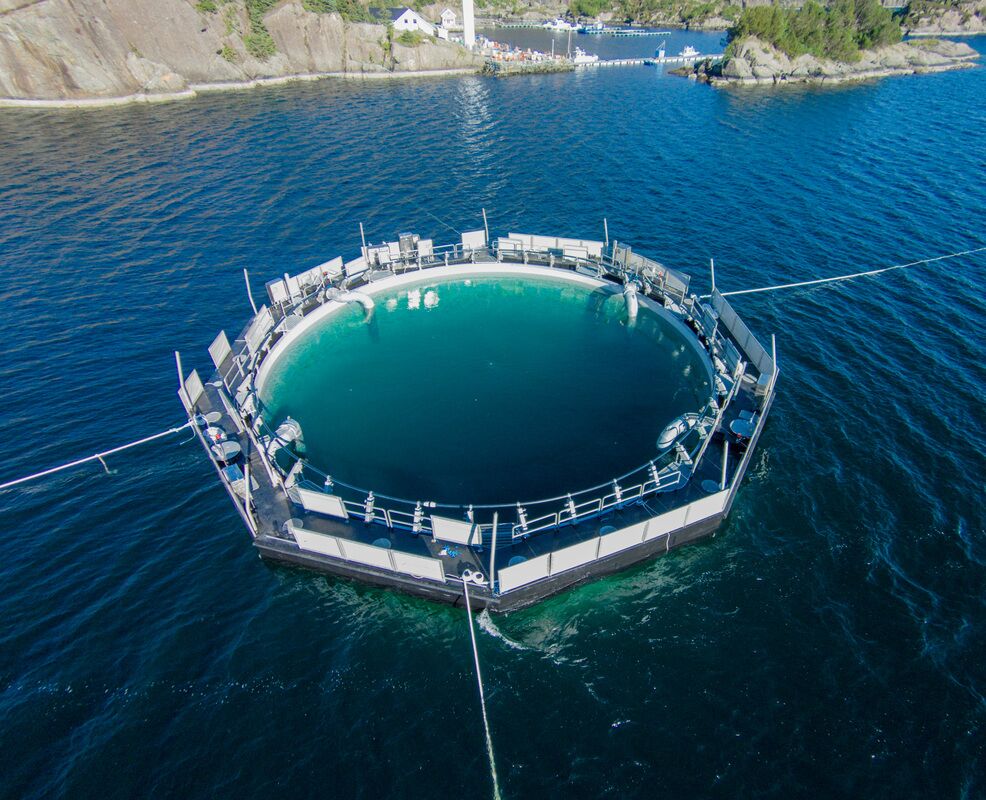 In 2007, the salmon of the Chilean fjords were affected by the ISA virus (infectious salmon anaemia). This highly contagious virus spread all the more faster as the local aquaculture industry is one of the most intensive. Two thirds of the production were destroyed in the space of three years.
This epidemic occurred after media campaigns on the harmful effects of salmon aquaculture, and it led Norwegian companies, which have made considerable investments in Chile, to change their business models. However, instead of reducing the size of their salmon farms, they decided to expand them.
The projects under development clearly illustrate the three underlying principles of this new approach: more space, total confinement, and a more remote location, further out at sea.

In 2015, the SME Sulefisk paved the way for change, thanks to its flexible cage developed by the Ecomerden firm. The cage is based on a composite membrane manufactured by the Ferrari group. It is perfectly watertight and contains within its 12,000 m³ tank a closed circuit breeding ground able to process the droppings of 600,000 salmon into fertiliser.  A little less ambitious are the Leroy group's tests relating to a new farming concept. Before being transferred to open water, around 200,000 smolts spend a year in a reinforced polymer elliptical tube immersed in 50 metres of water; the tube is also fitted with two propellers that create a longitudinal flow of water. Marine Harvest, the world leader in salmon farming, had greater ambitions. 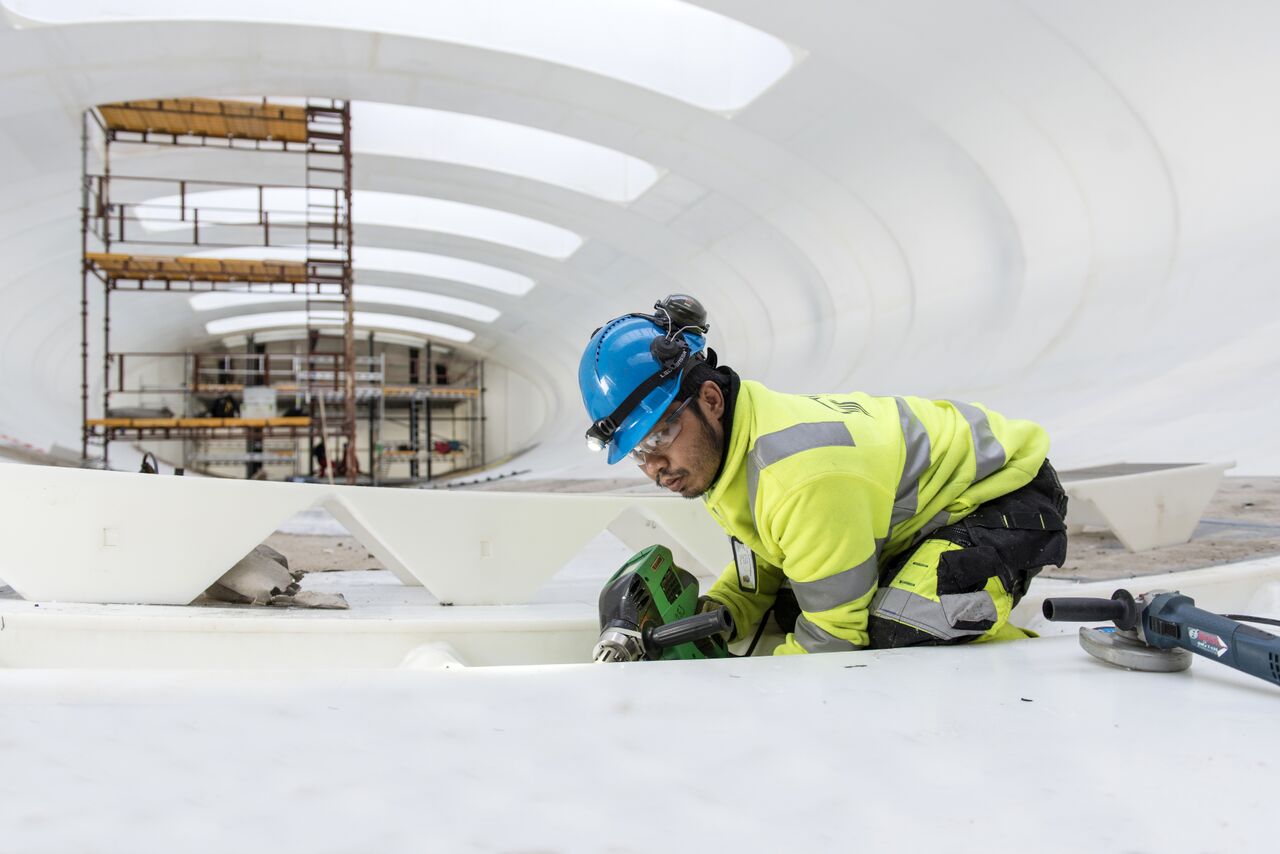 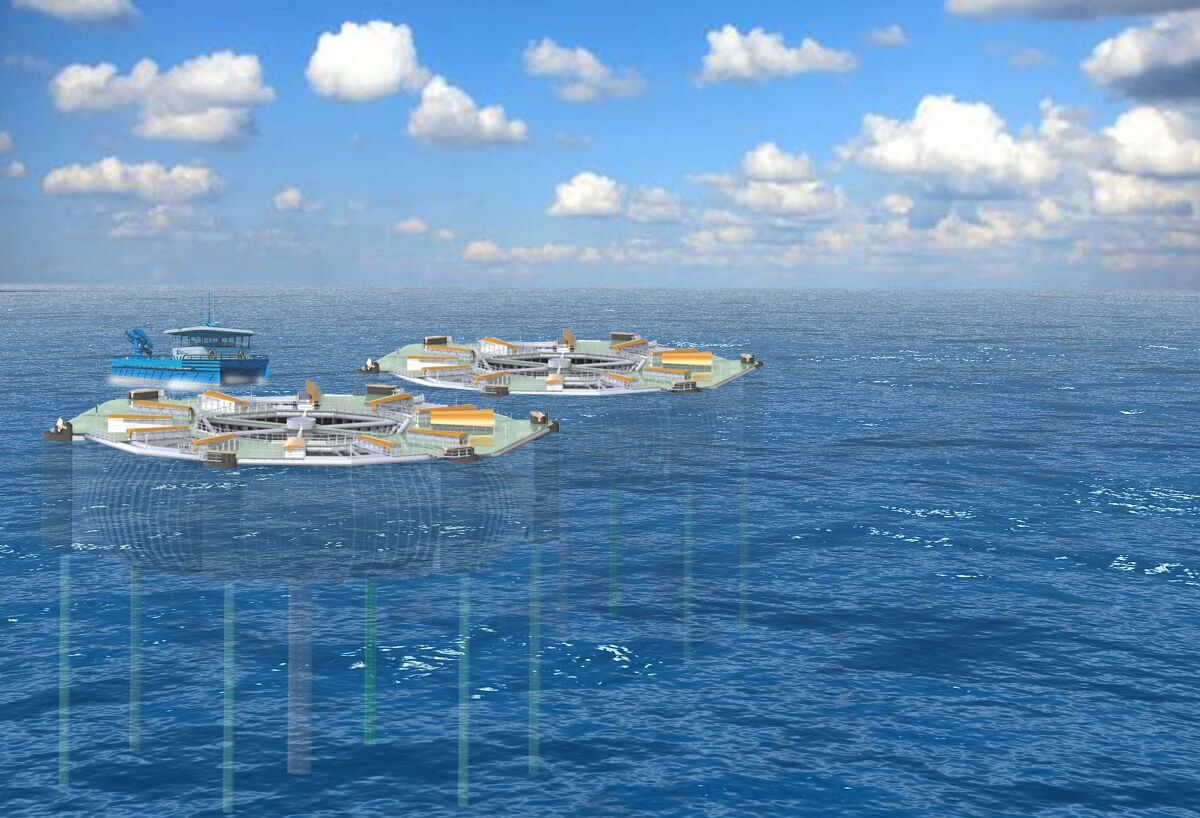 It is awaiting approval from the Norwegian government to construct its Marine Doner, a gigantic autonomous container of 65,000 m3 able to accommodate around one million salmon. Its composite resin toric structure on piles is supported by a central mast measuring around 50 metres in height. All of this before constructing the Egg, a floating ovoid farm at a depth of 45 metres, built from a polymer resin composite material.

Full steam ahead for anti-fouling polymers

Fouling linked to the accumulation of microorganisms is a recurring problem in the use of submerged aquaculture structures such as cages and nets.
A true scourge, fouling weighs down nets, fishing vessels, and shellfish farming equipment, and it also affects the shellfish themselves. As it obstructs the cages, it reduces the flow of water and makes cleaning the nets a Sisyphean task. Despite frequent brushing, the presence of biological waste requires the use of biocidal substances that are harmful to the fish and the environment.

In the past, impregnation treatments used heavy metals such as chromium and tin. Their use having since been prohibited by sanitary regulations, they were replaced by copper oxide particles dissolved in a polymer coating that reduces scaling. Unfortunately, they do not entirely prevent the phenomenon from occurring! The stakes are so high, even beyond aquaculture, that there is fierce competition to develop longer-lasting effective repellent solutions, and above all, that are environmentally-friendly.
For the time being, silicone-based delayed effect treatments and nanoparticle-charged resins are delivering encouraging, although highly targeted, results. Copper, however, offers a wider spectrum in terms of protection. 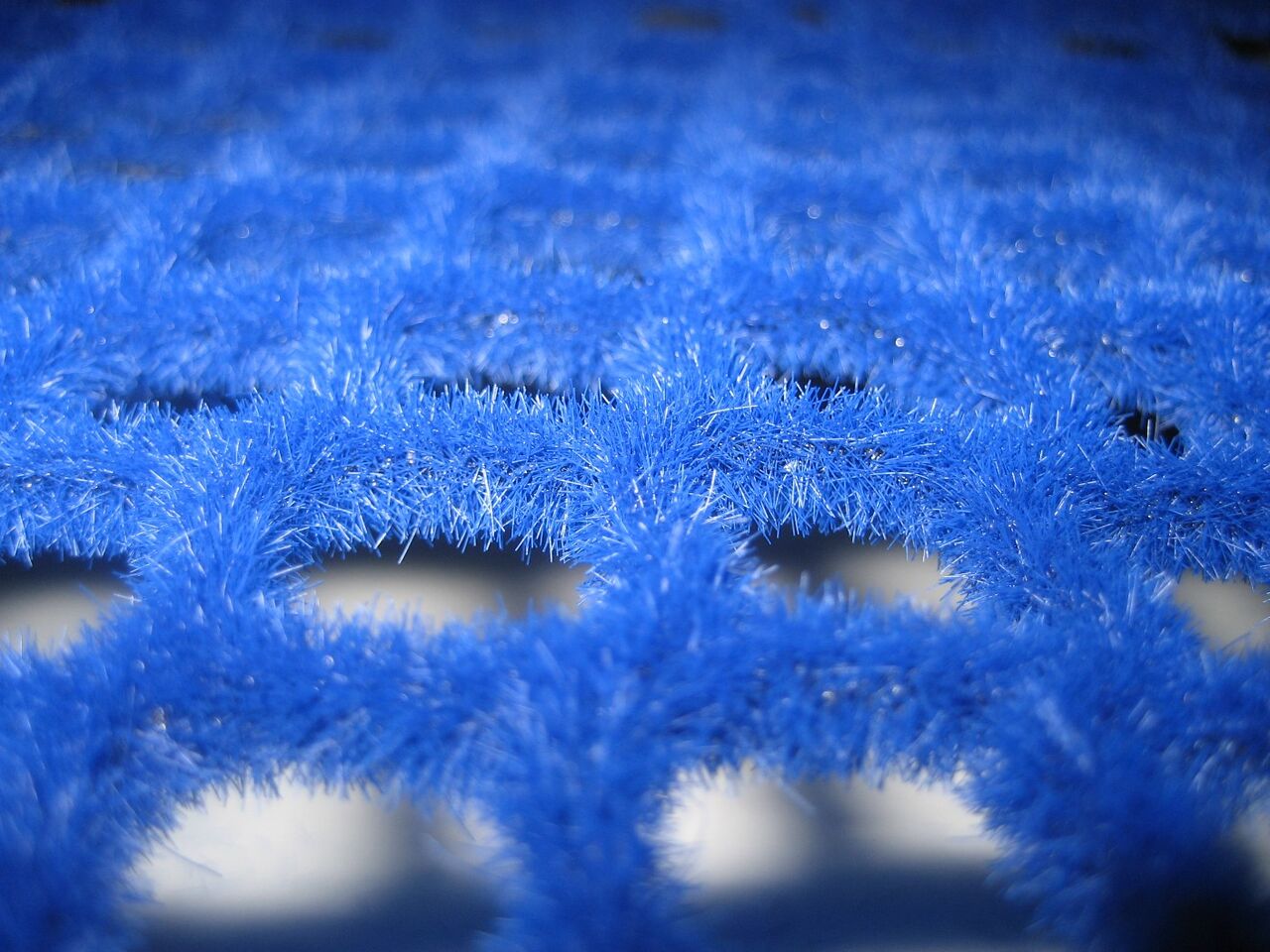 Useful facts about the aquaculture industry 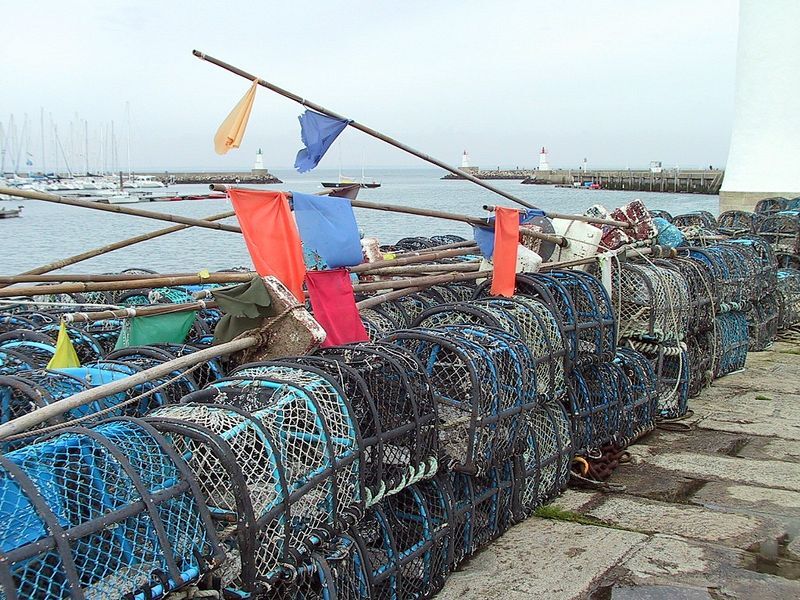 Aquaculture refers to all aquatic animal or plant production activities in an aquatic setting.
•    Fish farming produces fish, and includes variants such as salmon farming (for salmonidae)
•    Shellfish farming: the farming of shellfish, including its various specialisations such as oyster farming, mussel culture, clam farming, cockle farming, scallop aquaculture and abalone aquaculture
•    And other activities, such as shrimp farming, algae farming, and coral aquaculture