Changing the world and cleaning up the planet seems to be everybody’s business but Quentin and Mathieu Witvoet decided to actually act on it. Since 21 July 2017, they have been cycling around the world to meet men and women who collect, recycle and re-use plastic waste! Six months later, and after 7,000 kilometres, this is the story of the first part of their round-the-world tour.

After crossing France, the two young cousins arrived in Spain and braved the high plateaus of Castilla y Leon to reach the furnace of Madrid for their meeting with Javier Goyeneche, the founder of Ecoalf. In 2011, Javier became aware of Saint Exupéry’s famous adage: "We do not inherit the earth from our ancestors, we borrow it from our children" and set himself a challenge: to create a line of high-end clothing made entirely from plastic waste found in the fishing nets of the Mediterranean. The Ecoalf association’s latest project, "Upcycling The ocean" works with over 2,500 fishermen on the Costa Brava who recover over 150 tonnes of plastic every year. With over 70 million plastic bottles recycled into shoes, jackets, raincoats and shirts, Ecoalf and its lab which conducts intensive research on quality with international partners have already proven that it is possible to create beautiful and well-designed clothes using recycled materials! 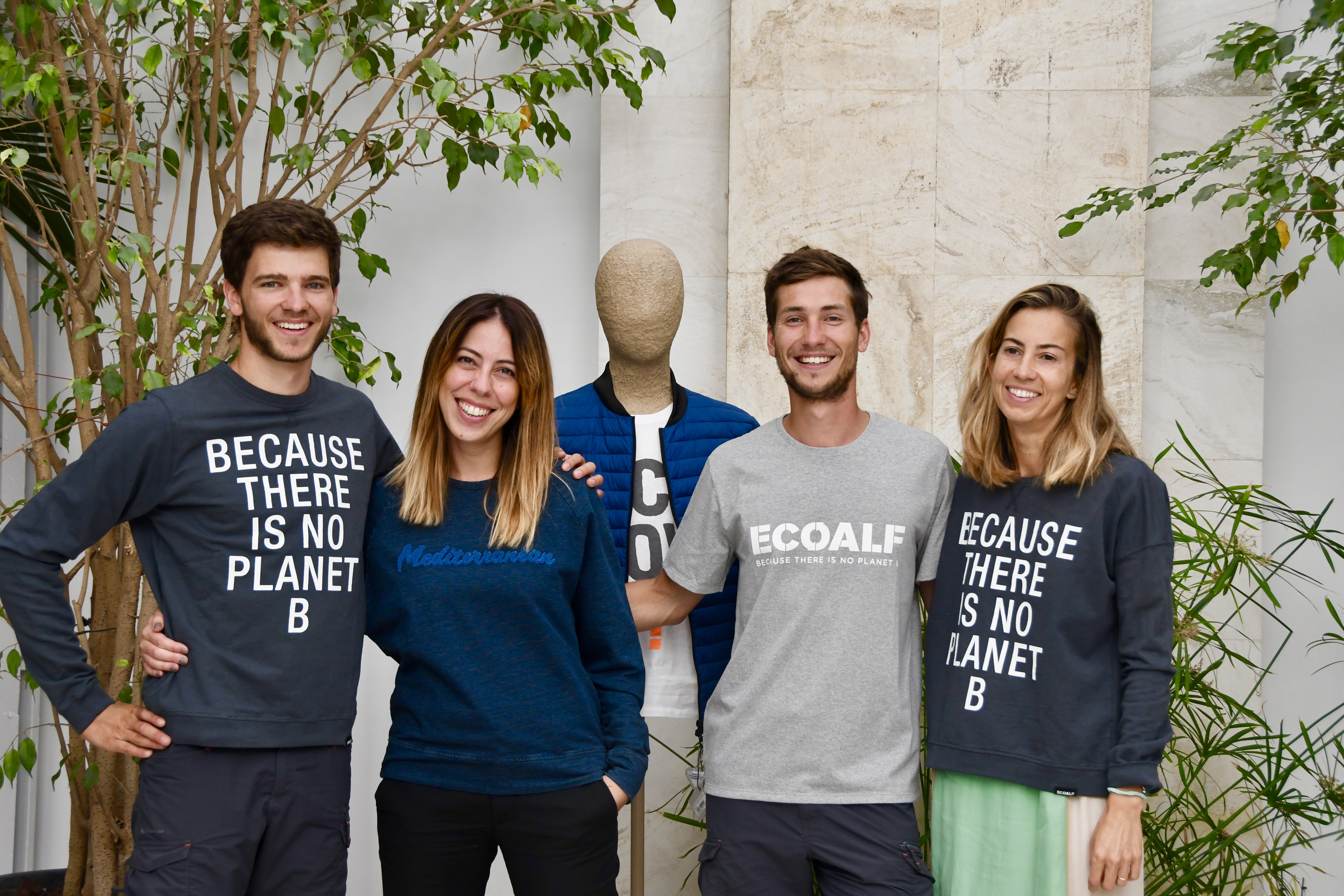 After cycling over 3,000 kilometres across Europe, the young team reached the Straits of Gibraltar to set their wheels down in Africa, and more specifically in Morocco, a country that is entirely dependent on others for its energy supply. Travelling along the coast from Tangiers, their itinerary took them to Casablanca, the country’s largest city with close to 3.6 million inhabitants. In the space of 10 years, the country has seen strong growth and has not sufficiently developed its infrastructures. The result? Behind breath-taking landscapes hide open-air landfills. It is not unusual to smell burning plastic along the area’s roads. It is difficult for associations, working on collecting and recycling waste, to progress due to a lack of support from the authorities.

Driss, a former acoustic engineer for the SNCF, has spent the last eight years recovering non-recyclable waste after purchasing his first truck at the age of 30. With the help of a professor at the University of Casablanca, he created Polluclean, an energy recovery company by developing a clever mixture of various non-recyclable plastics. His solution? Converting non-recyclable waste into fuel. His company produces 80 tonnes of fuel per day. In Morocco, this energy could gradually replace imported fossil fuels and become an economically and environmentally interesting energy alternative.

South Africa - The Virtuous Circle: recycling to help the most disadvantaged.

The two partners took to the skies to reach Johannesburg and continue their trip through Africa. First stop: Durban, to meet the teams working at Wildland, an NGO working on environmental and social issues. In South Africa, around three million children do not have school desks in addition to suffering from many nutritional deficiencies. The Dupont company has developed a multi-layer plastic packaging to hold the nutritional supplements provided by the Future Life Foundation to these disadvantaged children. 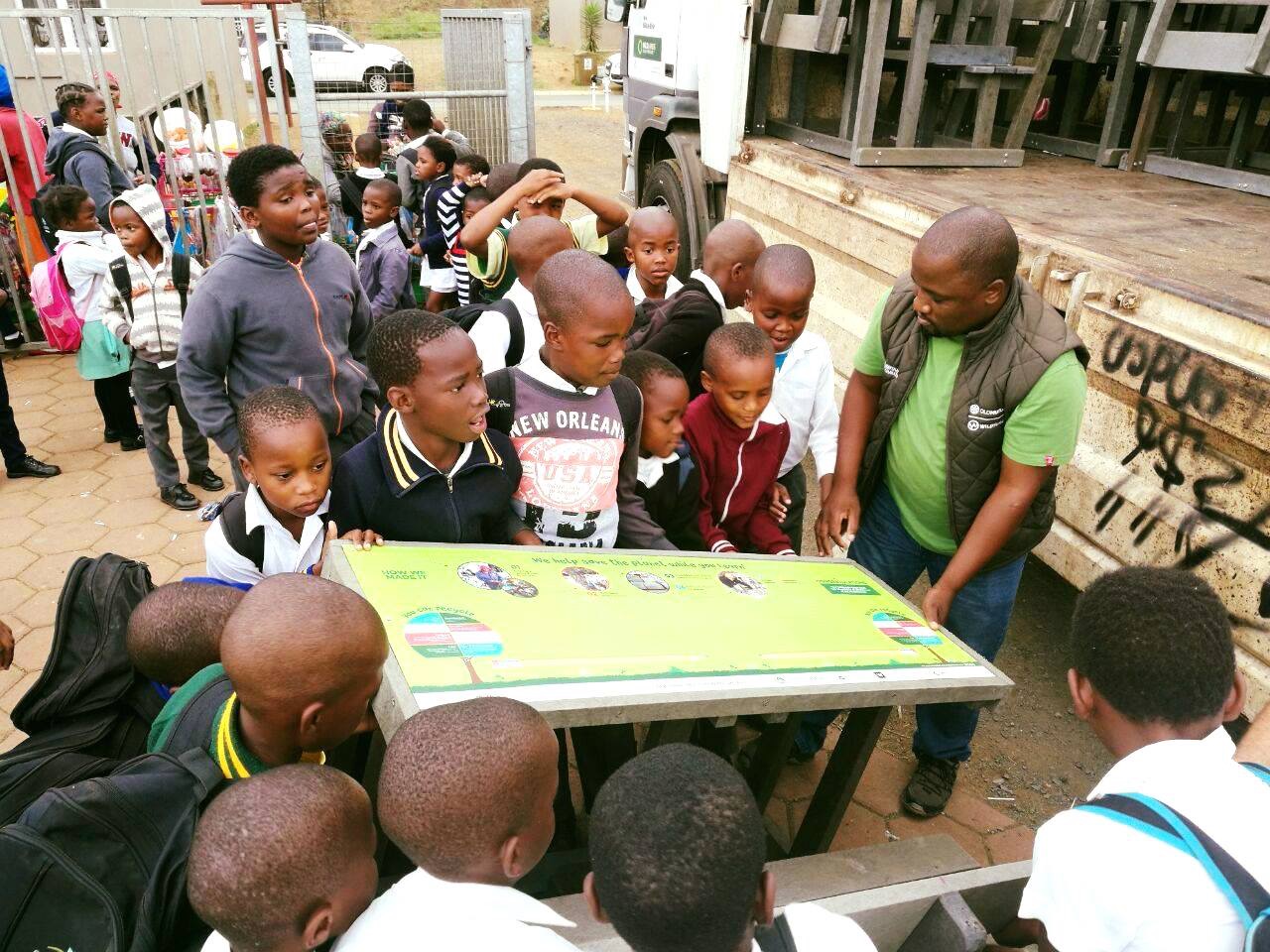 One million of these particularly durable bags have already been distributed in townships. The children sort the packaging so that it can be collected and re-used by RWPA, the company responsible for recycling them and converting them into granules and then plates that are used to build desks for the schools in the townships. With school desks, school grades have improved by 20 %. At present, three million children in South Africa do not have desks in their schools. The manager of RWPA and his son developed this world-first recycling process after two years of research conducted in their kitchen! After making desks, they are now considering diversifying their business and building affordable construction planks for the townships.

Impossible to resist the call of adventure. Quentin and Mathieu got on the N1, Mozambique’s only road. After travelling 1,200 kilometres in a straight line, they took a turn towards the coast to reach Beira and meet with Stéphane. This former car mechanic, who now manages MSF’s vehicle fleet (Médecins Sans Frontières), arrived in Mozambique 11 years ago and set himself a unique challenge: developing recycling in one of the world’s poorest countries, and creating jobs. With his assistant Antoine, a young Political Sciences graduate, they regularly take their pick-up truck out on the road to meet with local authorities to plead their case and find land. They then set up collection points called “eco-points” near landfills and high population areas and put the “scavengers”, who collect waste for compensation, into contact with the companies carrying out recycling.

They currently have a presence in the country’s 15 largest cities and have recycled over three thousand tonnes of plastics. In parallel, they are developing a programme of school competitions to educate the next generation about sorting. Over 80,000 children have already been educated about the topic! They are now looking towards structuring the industrial component of the recycling industry in order to recycle waste as close to the collection points as possible. 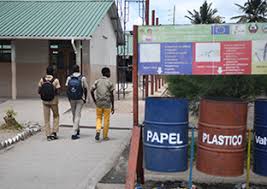 After the asphalt of Mozambique, it was Zimbabwe’s dirt tracks under a blazing Sun and then Lake Malawi. Travelling up East Africa, the two cyclists’ counters displayed 6,000 kilometres when they crossed the border into Tanzania with a simple objective: reaching Dar Es Salaam, the country’s economic capital. Located on the heavenly coast of the Indian Ocean, the city suffers from waste building up in the streets, parks and on the beach itself. Some hospitals even dump their waste into the rivers, and it is not unusual to find syringes on the beach! The Nipe Fagio association, incorporated as a civic collective, has made the environment its main priority.

On the first Saturday of every month, it organises collections with the local population and uses the opportunity to train for the world’s largest waste collection event, the “World Clean-Up Day 2018” in which 132 countries participate. The aim of the operation is to raise awareness amongst the general public by mobilising 5% of the world’s population on 15 September. As a final goodbye to the African continent, Quentin and Mathieu helped them clean-up the beach. A final gesture for the environment before changing continents and travelling to Asia, their next destination!

Read the part 2 Plastic waste: inventive solutions around the world
The feature's sections
Share this article

See similar articles
Read the previous article Back to basics for plastics
Read the next article Plastic waste: a trip around the world to find sustainable solutions