What is Piezotech's role within Arkema ?

The Piezotech Company, which has been developing a range of fluoropolymers with very high added value for around twenty years, was acquired by Arkema in 2010 and has been developing within the group's incubator. Specifically, the companies in the incubator focus on innovative startups and projects likely to require the performances of advanced polymers, with the help of their contact points in the world of academic research.
Electroactive polymers, which are our chosen field, obviously fall under this category. In the future, they will be found in many everyday, connected and interactive objects, in the form of powders, thin films or inks.
Piezotech continuously monitors new developments in this area and can, where necessary, mobilize internal or external research and development resources, and subsequently the appropriate machinery in order to finalise a tailored solution, on an industrial scale.

Are these polymers in competition with other materials ?

For almost half a century, the field of piezoelectric devices has largely been based on using traditional materials such as PTZ ceramics. They are used for many types of sensory applications, as a sensor or actuator, integrated in the areas of industrial automation, metrology, medical diagnostics, robotics, the aerospace industry and electronics.
The emergence of electroactive polymers was more recent and they are still the focus of much research. They are presented as an alternative, for certain conventional uses only. Their great potential lies mainly in the creation and dissemination of new applications that are cheaper as they are intended for the mass market.

Which are the main families of polymers concerned ? 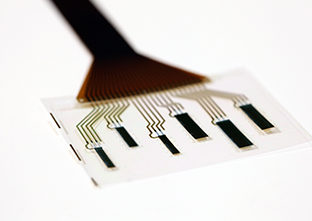 Various classes of materials are currently being studied, including silicone or acrylic elastomers which contract by an electrostatic effect, or conductive or ionic polymers which deform following the migration of charged particles. Among these materials, electroactive fluoropolymers, namely the derivatives of PVDF, are the subject of increasing interest as they are the only printable polymers which also have high electromechanical properties.

Do you believe that this is the most promising material ?

Ferroelectric PVDF has proven itself in many applications, including impact or pressure sensors, hydrophones and sonar or infrared detectors. However, it has certain disadvantages in its initial form.
For instance, the need to stretch out the PVDF film in order to give it its electroactive properties limits its use. Moreover, it is not printable and can only be sold in the form of polarised films that are around ten to several hundred microns thick, which limits their development in organic electronics. Our aim is to identify its weaknesses in order to circumvent them and exploit its tremendous strengths. 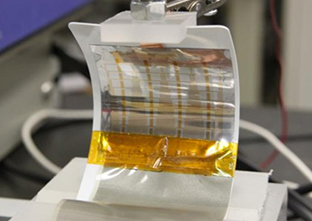 What progress have you made in this regard ?

We were able to make PVDF derivatives that do not require the stretching step. The copolymers readily crystallise, are soluble in various solvents and, above all, can be printed using various techniques: coating, screen printing, inkjet, etc.
Printing enables ultrathin films (ranging from a few nanometres to several microns) which are easily polarisable to be deposited on large surfaces at low cost. They can be combined with other polymers (printable, conductors, semiconductors, electroluminescent), thereby offering vast opportunities for development.

What are the most promising applications for your products ?

Our polymers will take part in the adventure of wearable technologies such as intelligent watches and glasses, or will be used to imbue medical assistance devices implanted into clothing with haptic or sensory properties.
However, the major market that we are aiming for as a matter of priority is that of printed electronics that emerged in the last few years. Simple electronic components, such as transistors, sensors and connections, can now be printed with conductive inks and thin layers of electroactive polymers. It thus becomes possible to manufacture electronic devices, at low cost, on flexible surfaces such as fabric, paper or flexible plastics, and even on large surfaces. The many applications of printed electronics will be able to develop on a large scale: smart labels, flexible screens and ultra-thin sensors are just a few of the possibilities.

See similar articles
Read the previous article Villagepump, the new source of drinking water for isolated communities
Read the next article 3D printing: "recycling polymers over and over again may not be a dream!