Europeans on the move

According to Eurostat, over 450 millions Europeans, i.e. 60% of the population, travel at least once a year. Of course, the differences are significant as the figures include 90% of Finns but only 22% of Bulgarians. And that's not the only difference, as not all travellers adhere to the same definition of travelling. There are not many point of similarity between adventurous backpackers and lovers of luxury hotels, although both seek out the greatest comfort in which to fully enjoy their time off. Tour operators, transport companies and equipment manufacturers are well aware of this and are exploiting the wonderful qualities of plastics to offer services and products that meet all of their customers' needs.

Backpacks that defy the laws of gravity 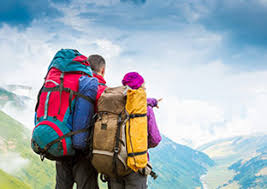 Choosing the right backpack is an art form and often requires a considerable amount of patience. The fault lies with polymers which have made the backpack a highly technical product. In this case, polyamides such as nylon are to blame. Nylon is of course much lighter than the greased cotton canvas used in the first models of backpacks, and it has more advantages to offer. The fibre's flexibility and elasticity allow models to be designed which perfectly spread the weight of the load while moulding the contours of the user's body, once the straps have been tightened. 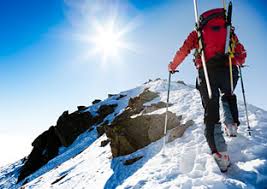 ome manufacturers even go so far as talking about antigravity solutions. And to top it all off, most high-end models are fitted with a breathable plastic mesh on the back, preventing the user's back from coming into direct contact with the bag. This enables air to circulate more freely, and means that backpackers no longer sweat unnecessarily. Finally, most straps and belts are padded with neoprene foam to absorb shocks and to prevent the straps from cutting into the skin. And, of course, the polyamides used are waterproof and enable the bag's contents to remain perfectly dry.

My house in a pouch

Even adventurers have to take a rest now and again. Whether in the middle of the desert, at the top of a snowy pass or deep in the tropical forest, backpackers must be able to rely on a relatively secure shelter in which to spend the night. Shelter being a rare luxury in the jungle, rest is usually to be found in a tent. Once again, polyamides make an adventurer's life much easier. Modern hiking tents are not the inconvenience that they used be as they now weigh around one kilogram. Even better, polyamide's great flexibility allow the tents to be rolled into a ball and stored in a bag measuring a bare few cm3 and which easily fits into one of the backpack's pockets. The tents are also waterproofed thanks to a silicone coating and they are breathable too. Until now, their only drawback was the poles, usually made from aluminium, which despite being light were relatively cumbersome.

Manufacturers had previously tried replacing them with carbon fibre equivalents, but the poles were too fragile and were prone to breaking if mishandled. Recently, Easton, an American manufacturer, developed a new type of carbon fibre pole that meets all the requirements of those who practice hiking in extreme conditions. The company's engineers completely revolutionised the hooking systems which had until recently been made of aluminium. The poles are now fitted with a new carbon clip. Resistance is increased and the new models are around 60% lighter than older models.

Polyester to fight the freezing cold 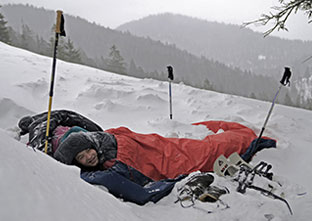 Once night has fallen and it's time to sleep, a good tent is not enough to protect yourself from the cold. The sleeping bag remains a crucial part of the backpacker's arsenal. It is even considered to be crucial for survival when temperatures drop below -20° C. Since times immemorial, goose or duck down were considered the ideal material as they were light, soft, warm and had a hollow structure enabling them to trap and store heat. Were they perfect? Not really, as they tend to bunch up and they don't do well in humid conditions. Fjallräven, a Swedish thermal clothing manufacturer, collaborated with the Austrian Goldeck Textil company to create a polyester-based synthetic fibre which has all the qualities of down and none of its flaws.

They are hollow and extra fine fibres (10% of which come from recycled polyester) which form clusters, creating a multitude of small air pockets that insulate from the cold. The fibres' molecular structure has a shape memory. In other words, they automatically take their initial shape after being compressed. And much like many other polymers, it does suffer the negative effects of moisture. The down is also enveloped in a breathable polyamide, although not for comfort purposes. The material evacuates the moisture resulting from perspiration and prevents those who enjoy adventure in low temperatures from waking up in a block of ice.

The Avalanche Airbag System offers mountain climbers their own airbag which works on the same principle as those used in cars. The airbag is comprised of a polyamide bag with reinforced stitching linked up to a bottle of CO2. In the event of an avalanche, mountain climbers can pull on a handle which inflates one or several bags, for a total of 150 litres, in only a few milliseconds. Thanks to the airbag, the victim should theoretically float to the surface and avoid being buried under tonnes of ice. The principle is based on material flow theory which states that the largest particles rise to the surface during an avalanche. The whole system fits into a small thirty litre backpack which can also accommodate all the equipment and supplies required for a daytrip. The airbag was first commercialized around twenty years ago, and studies have shown that the system increases chances of surviving an avalanche threefold. 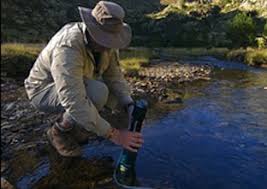 What's the best way of managing the problem of water during a long trek? You can't carry a large amount of bottles, and dehydrated water hasn't been invented yet! Until recently, the best solution was to boil water collected in nature. It's a long and arduous process, and it requires some preparation. There are now water bottles fitted with polymer filters whose pores measuring between 0.1 and 0.3 microns (micrometers) filter out anything above that size. Some filters are simply mechanical filters, and others use chemicals, activated charcoal and silver particles, to kill almost 100% of all bacteria. The process is relatively speedy and enables users to hydrate themselves fairly quickly. They are extremely useful as they are so effective that they can filter water from almost anywhere. Another major advantage is that the filter is re-usable. A single water bottle is generally enough for the full length of a trip as it can filter 200 litres of water.

Adventurer looking for a connection

It may somewhat spoil the old myth, but few adventurers take off and cut themselves off from the world. The only problem is that smart phones and tablets are very sensitive to humid and dusty environments, and especially to shocks. These tools therefore require the best protection available. There are silicon covers, although they are fun but not very effective against violent impacts. Fortunately, a solution has been found in the shape of a polymer composite christened RPT, for Reactive Protection Technology. However, its name doesn't give much indication of its composition. We only know that it is made from silicone and a Kevlar-type fabric. The polymer hardens on impact and absorbs 90% of the energy. It is the ultimate protection against the hardest impacts and the most extreme conditions. More than a simple cover, it is a case closed by a watertight zipper which has to be opened to answer a call - a minor inconvenience for so much protection. 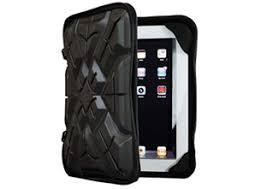 Finally, a wide range of chargers are available, enabling users to make a call in the event of an emergency; they are fitted with organic solar cells that can be used to recharge the devices in just a few hours.

See similar articles
Read the previous article Tomorrow’s vehicles: polymers lending their weight to the future
Read the next article Plastics in the garden