As demonstrated by the movie Avatar, motion capture has some good times in store. But the computer does not do everything. Make-up is still indispensible, but today make-up uses more polymers than foundation. Indeed, they allow the actor to identify with his or her character in any situation throughout the character’s life. This is evidenced by La Vie en Rose, in which Marion Cotillard so closely resembles Édith Piaf, behind her make-up. The same goes for Brad Pitt, totally believable in the skin of an 80-year-old Benjamin Button. In order to achieve this, make-up artists use foam latex masks. Specially designed to adapt themselves to the physiognomy of the actor, they are created using a resin mould of the actor’s face, into which latex is poured. If you don’t believe this, take a look at Tom Cruise in M:I-III as he effectively swaps heads in no time at all and Robin Williams, who uses his facial prosthetic to become Mrs Doubtfire, winning the film an Oscar for Best Make-up in the process! 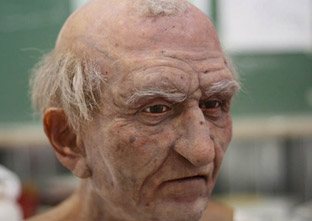 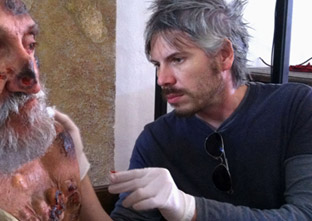 The days of unrealistic wounds in the cinema are over. Fake injuries now look more genuine than real ones. Silicon is often used in this field. It can be applied as a polymer film to become a second skin, in the form of a wound, a burn or a scar that can be coloured with a silicon-based colouring.
The Art and Creative Material Institute, the acknowledged authority for creative materials, has given its seal of approval to this process. It can also be used as standard silicon to create in advance wounds that can be attached later, such as those seen in horror films.
In addition, its flexibility allows it to match the movement of the skin and to remain fixed in difficult areas like joints. For less serious injuries like bruises, liquid latex provides a more interesting result. To put it succinctly, if silicon is a gore-fest, latex is more like playground scrap.

The stuff of superheroes 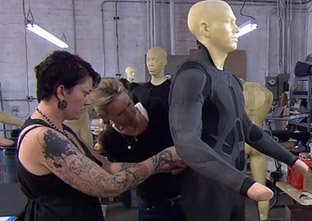 The era is over when Christopher Reeves pranced around in his Spandex tights, relying on polyurethane-based elastane fibre for its elasticity. Costume designers have since moved on with the help of polymers, ushering in a new age for superheroes.
Today’s costumes are no longer simple items of clothing. They are more like prostheses that are perfectly adapted to the actor’s body to leave the muscles visible, muscles that are often highlighted by a polyurethane resin shell.
On the whole, traditional materials like imitation leather, elastane and foam latexes are still used, but in specific combinations. Elastane, which is more resilient than latex, is now used for the interior of the costume to provide the actor with greater mobility.

To see Peter Parker knocking up his Spiderman costume one night in his bedroom is quite touching, but scarcely credible. Costumes now represent a fundamental element of the major productions, involving considerable investment in design and technology.
For the film Tron Legacy, the production team spent almost 13 million dollars on the luminous costumes similar to those in the previous film.
Borrowed from a Japanese firm, the process consisted of covering the material with a dozen layers of a flexible polymer, sprinkling the layers with conductive metal particles then a fluorescent powder reacting like cinematic gelatine.
The costumes of the Sirens were created by spraying rubber onto elastane to make them look super-smooth. These spectacularly skin-tight and delicate costumes had to be handled with care, particularly when filming action scenes! 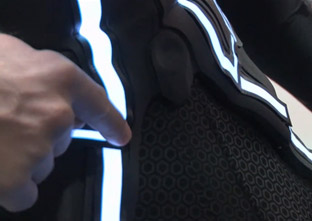 Modelling clay is also a star 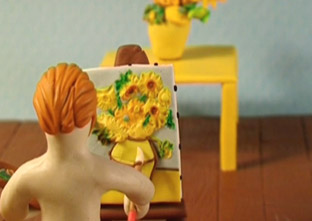 Is modelling clay a thing of the past? Don’t be so sure. Since the 1980s, the film Wallace and Gromit has inspired an entire generation in film animation with its clay characters.
Wallace and Gromit were made from plasticine, a material composed of wax, oil and a softener. This material has the unique characteristic of not drying and therefore can be continuously reused.
Tim Burton set the pace with The Nightmare Before Christmas, made using the stop-motion technique. This technique consists of modelling the characters in silicon and plasticine. They are then photographed and the movements are broken down one by one. Once the photographs are put together, all that remains is to smooth out any slight flaws in the movement in order to increase the fluency and then it is ready to roll. The result is just like 3D!

May the plastic be with you !

George Lucas understood the potential of polymers with regard to special effects. Without plastics, no intergalactic saga! Take Chewbacca: his mask with its articulated mechanical jaws equipped with acrylic resin teeth made our favourite Wookie a star of the screen.
Under the composite shell of the faithful C-3PO (an epoxy resin and fibreglass mould), an actor is concealed. Not so with Master Yoda.
Although he may not be the Emperor’s toy, he is nevertheless no more than a foam latex puppet moved by several operators.
As for Jabba, he is more like a “Trojan slug” inside which, beneath a shell of composite materials covered with a foam latex skin, three technicians are wriggling around. Apart from the likeable Jar Jar, not many characters are 100 % virtual. But for all that, these plastic monsters undoubtedly serve their purpose!