Technical textiles at the forefront of innovation

Sport has become the top hobby

Sport is France's favourite leisure activity. Over one in four people rank sports at the top of their list of favourite hobbies, ahead of reading, television and music. Almost half of sports enthusiasts (48%) enjoy hiking or running, the most popular activities in daily life, far ahead of cycling, swimming or even dancing and fitness training. The increase in the number of enthusiasts is reflected in the increase in the cumulative sales turnover of the equipment, textile and shoes industries. The growth is driven by the boom in running and sales of shoes which account for over 60% of the volume of sales of sports equipment worldwide. Sports shoes, clothing and equipment contain ever-growing numbers of innovations and are pulling up the technical textiles market with them.

The cult of sports

In the 1940s, with the first appearance of polyamide on the market, the first synthetic fibre sold by Dupont de Nemours, the textile industry would be forever changed. The Sports & Leisure industry would soon become a test bench for all the new materials, including polyester, aramid, acrylic, polyamide, etc.
The 2000s would be a turning point for sportswear. Increasing numbers and ever more efficient materials and technologies would be used, and sports enthusiasts would become ever better equipped. In parallel to this race towards performance, there would emerge a real cult of sports, expertly orchestrated by marketing efforts and media saturation. Athletes became icons, role models, influencers of fashion and trends. Their sports gear would serve as inspiration for commercial models, and sportswear would become mainstream.

The apogee of synthetic materials

Breathability, waterproofness, thermal insulation, elasticity, evacuation or absorption of water, thermoregulation, compression, etc. Sportswear has as many features as uses. Thanks to chemistry, the new generation of synthetic fabrics are versatile: they combat bad odours from excessive perspiration, regulate the body's temperature, and evacuate the heat produced by the body during intensive exercise. Others filter ultraviolet rays, offering proper protection during outdoor sporting activities. Yet others insulate the athlete against low outside temperatures. Swimming enthusiasts will opt for swimwear that reduces friction while making leg and arm movements more effective.

Designed using a wide-area polyester fibre exceptionally composed of four channels, the Coolmax® acts on thermoregulation. The fibre works as a transport system for evacuating moisture from the epidermal layer outwards. This uniquely-designed material dries off in record time, keeping athletes dry during the effort. In addition to having an exceptional aesthetic appearance, the Coolmax fabric is suited to all seasons. As it is a hydrophobic substance, it retains 13 times less moisture than cotton. Given that it promotes the evaporation of perspiration, it is also effective in eliminating bad odours.

there is one fibre which has contributed to improving the quality of sportswear, that fibre is elastane!
First launched in 1959 by DuPont, elastane belongs to the family of polyurethanes, with what is known as linear segmented areas which are alternatively flexible and rigid. This specific molecular structure gives the fibre its elastic and stretch-resistance properties: elastane or Lycra can be stretched up to seven times its initial length, and it will instantly return to its initial shape after releasing the tension. It is both light and highly stretchable, providing great freedom of movement both under water and above.

First discovered in 1961, aromatic polyamides or aramids are polymers with exceptional qualities of mechanical and thermal resistance. This material, which takes the form of fibres, can be used under extreme conditions. It is used to make firefighters' outfits and race car drivers' outfits. The fireproof outfit worn by race car drivers became mandatory following the crash of world champion Niki Lauda in 1976 which left him disfigured for life as a result of his burns. The following year, a true revolution would take place in the field of race car drivers' outfits thanks to the use of an aramid fibre, Nomex®, which offers protection against burns at very high temperatures.

Originally, polar fleece referred to a technical fibre made from polyethylene de terephthalate (PET) and other synthetic fibres with insulating properties. This innovative textile was developed in Massachusetts in 1979. Its historical manufacturer Malden Mills (currently Polartec LLC.) sought to create a material that was as warm as wool, but without its drawbacks and with a few interesting new properties. Inspired by the fur of polar bears, from which it gets its name of polar fleece or fibre polar fleece first appeared in outdoor clothing in the early 80s under the Polartec® patent. Today, Polartec LLC, whose polar fleece jackets are increasingly manufactured using plastic bottles, has remained a leader on this highly competitive market supplying technical fabrics to many specialised labels. By 2015, Polartec had already contributed to recycling one billion plastic bottles into its polar fleece jackets.

A waterproof and breathable Teflon-based material 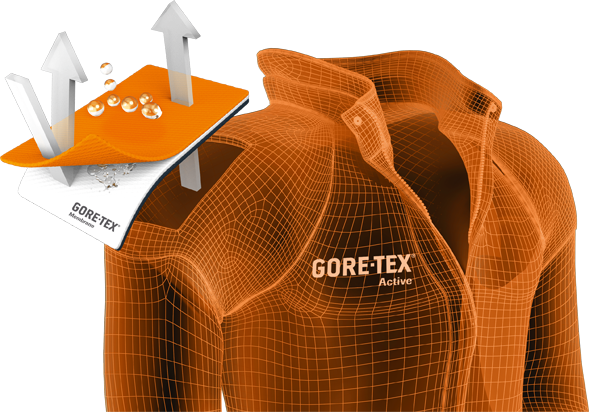 Bill Gore, an American chemical engineer, came up with the idea of improving clothing by using a material with exceptional non-stick and thermal resistance properties: PTFE, better known under the trade name Teflon. The early years were difficult, and it is only in 1969 that his son was able to develop a material able to evacuate perspiration and prevent water drops from passing through: Gore-Tex was born! Given that it is incredibly robust and has many properties such as a very low water absorption rate and good weather resistance, Gore-Tex® has since been used extensively in firefighting equipment worldwide as well as in nautical and hiking gear. Waterproof and breathable, Gore-Tex is now a generic brand.

Sports and innovation are now joined at the hip. The first offers a broad field of expression to the second for the purpose of optimising the performance of professional and amateur athletes alike while providing them with ever more comfort. From ancestral know-how to new, high-tech practices, the scope for exploration is immense. In R&D departments, designers, engineers, researchers and industrialists are exploring new features, thus creating new technical uses and new trends in the sports textiles industry.