Plastics: top of the class for writing

Writing implements are the true measure of the development of literacy. In the early 20th century, they were also a reflection of the social hierarchy. In workshops, chalk and pencil were more often used for drawing than writing. Pen and ink were indispensable tools at school and at the office. The fountain pen was a luxury item reserved for those professions as part of which it was necessary to put one's reputation on the line through a signature at the bottom of an article or a contract.
Both modern and practical, American manufacturer Waterman's invention soon crossed the Atlantic. Imitators the world over offer increasingly sophisticated models. In addition to the nib, which is always made of metal and sometimes coated in gold, the other parts of the fountain pen are manufactured from precious or innovative materials such as new synthetic resins which are lightweight, strong and resistant to inks and, most importantly of all, are easy to shape and machine.

Ebonite, which is widely used to make the mechanisms, is also used to the most beautiful effect in the other parts of fountain pens. The pearl motifs achieved through the use of celluloid, pioneered by Sheaffer in 1924, quickly became very popular. Less flammable acrylic resins took over in the 30s.
Had higher education not been opened to all, the fountain pen might have remained a luxury item. Luckily, the development of the plastics industry in the 60s helped equip millions of new students with affordable fountain pens that met the requirements of teachers who favoured it over other writing instruments. 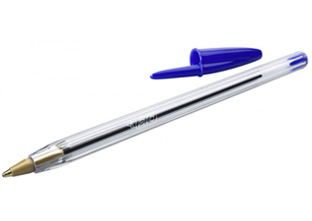 The Biro brothers' invention took 10 years to take off. With its retractable ballpoint and push button, their Birome had a headstart on all its successors. Oddly enough, it would be the less sophisticated models that would launch the ballpoint pen to the top of the writing world.
Less sophisticated? Not necessarily! The Bic Crystal's tungsten carbide ball enclosed in a brass tip and its fixed cartridge resting within a hexagonal transparent polystyrene body made it a significant technological achievement.
This minimalist record-breaker whose performances were first established in 1949 – two kilometres of script for a weight of only 5.8 g, and costing less than half a franc at the time, earned its place in the permanent collections of the New York Museum of Modern Art and the Georges Pompidou Centre in Paris.

What more can be said about Bic's iconic four-colour pen that has remained almost unchanged for over 50 years?
Sold for the first time in 1970 with the accompanying slogan "Change ink colour without changing pens", the iconic blue and white plastic pen is still designed the same way, still has the same mechanism, and still combines red, blue, green and black ink in a single product.

The recent announcement stating that it would be removed from circulation caused an outcry on social media: it was the big news of the new school year! Fortunately, it was only a rumour that the manufacturer was quick to dispel! The iconic Bic 4-colour pen will remain on sale although it will be accompanied by a revised and modernised version in which the green ink, which was the least used, will be replaced by a mechanical pencil. All that remains, is to wish the young BIC® 4-Colour 3+1HB as illustrious a "career" as its famous predecessor!

The felt-tip pen, a wealth of applications for polymer fibres 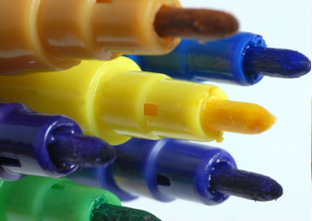 "I want a pen that has the shape of a pencil and the flexibility of a brush". Those were the specifications that Yukio Horie, the Head of Pentel, requested from his small research department. The metal used in fountain or ballpoint pens was out of the race; only new synthetic materials were up to the task.
The Sign Pen was launched in 1963 after months of extensive testing. Its acrylic and resin fiber nib gave this new type of pen a degree of flexibility that suited the Japanese culture of calligraphy perfectly and it became a roaring success. Even better for the company, the pen became a fixture first in the United States and then in Europe in the space of two years.

Half a century later, the felt-tip pen has inspired a multitude of varieties: pens for writing, for technical drawing or colouring, permanent or erasable ink markers, highlighters, etc. Manufacturers now use a large array of fibres able to meet specific requirements. The key to making a felt-tip pen is achieving the successful marriage of the most suitable tracing polymer: made from PET, nylon or polyacetal for the finest points, with a reservoir made from synthetic fibres chosen on the basis of their absorption capacity, their capillarity and their ability to provide controlled distribution of the inks.

See similar articles
Read the previous article A miraculous catch with plastics!
Read the next article Sports-textiles: polymers in the lead