Plastics at the service of the city

Plastics at the service of the city

Over 60% of the world's population currently lives in cities, as opposed to only 30% in the 1950s, and there are no signs of the trend running out of steam. City growth is one of the major events of the beginning of this millennium. There are around one million new urban residents per week. By 2030, the world's population is expected to reach eight billion people, five billion of which will be living in cities. This growth will primarily involve the so-called developing countries, whose cities should be home to an additional two billion people in the next 25 years 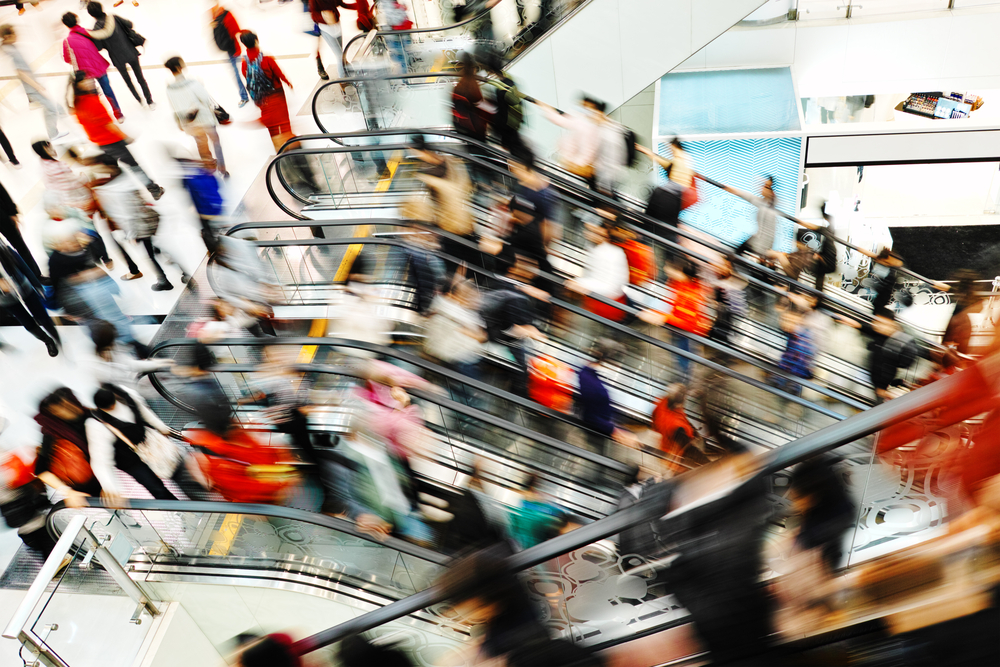 A different vision of urban transport

of personal vehicles seem to be numbered in cities. Urban planners find it unthinkable that each citizen will still have their own vehicle in the near future. And developments in electric car technology will have little to no impact on the problem because although it partially solves the problem of pollution, it has no impact on urban congestion. Means of transport are being reorganised in major cities as a result. The most promising are shared vehicles such as bicycles and cars.

Shared vehicles: plastics are used to meet the specifications

Offering self-service cars and bicycles entails taking the risk of seeing these means of transport degrading rapidly due to the lack of care, whether or not voluntary, shown 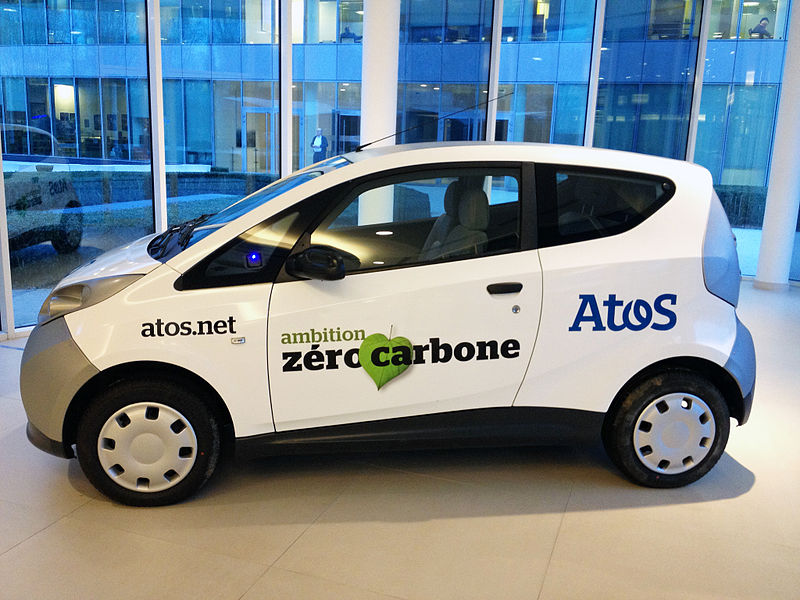 by their users. How can this be remedied? By using materials that are affordable and easily replaceable when damaged. And polymers, of course, fit the bill! Shared cars are mainly composed of plastics, ABS for the body or various polymers including a polyurethane foam for the dashboard and PVC for the seats. Some might say that many cars are manufactured in this way. It's true, but in this case, effectiveness is more important than design. The parts are made into very simple shapes so that they can be easily moulded. Also, each of the vehicle's parts can be replaced in a couple of minutes should it need repairs. The plastics used require little maintenance and are very light, significantly contributing to the autonomy of electric vehicles. 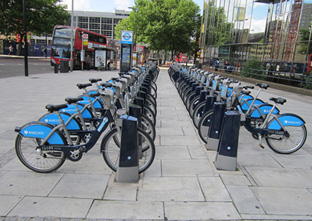 Self-service bicycles have not been left by the wayside. 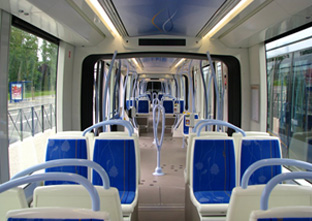 They are fitted with various plastic casings for more reasons than simply protecting cyclists from water when it rains. The main purpose of these casings is to prevent less scrupulous users from transforming them into organ banks for their own bikes. Many plastic parts are moulded and fastened to the frame and handlebars and as a result, they are virtually tamperproof. Metal would have done the job just as well, but it is too heavy and would render the bicycles unusable except for expert cyclists. It is also worth noting that the LED lights cannot be removed as they are encased in the bicycle's frame. Safety is improved as they enable cyclists to remain visible at any time of day or night..

However, not all cities offer shared vehicle solutions to their citizens. Public transport is still the preferred means of transport in many boroughs. Although their role has not changed in over a century, taking citizens from point A to point B, much effort is being put into improving their look and comfort. There is a good reason for expending such efforts: buses, trams and subways contribute to a city's image. Their layout and look remains a challenge as they must look good, be comfortable, hard-wearing and also provide a feeling of wellbeing. It is no coincidence, therefore, that plastics win every time given that they meet all of these specifications. A smooth polycarbonate is now used for the walls and ceilings of certain trams and commuter trains, making them feel like cocoons. The feeling is reinforced by highly resistant polyamide carpets which accentuate the feeling of comfort.

The seats are often covered in a polyamide synthetic velvet, a material which is easy to clean, pleasant to the touch and which can be printed with designs. It can easily be printed with fashionable colours and patterns, making our buses and trains the trendiest of all forms of transport.

The end has come for those old glass boxes fitted with a simple bench and a garbage bin. The mayors of some major cities have understood that bus shelters are more than just shelters for their citizens and are also representative of the city. The city of Paris has decided to gradually replace its own bus shelters. This new generation of bus shelters 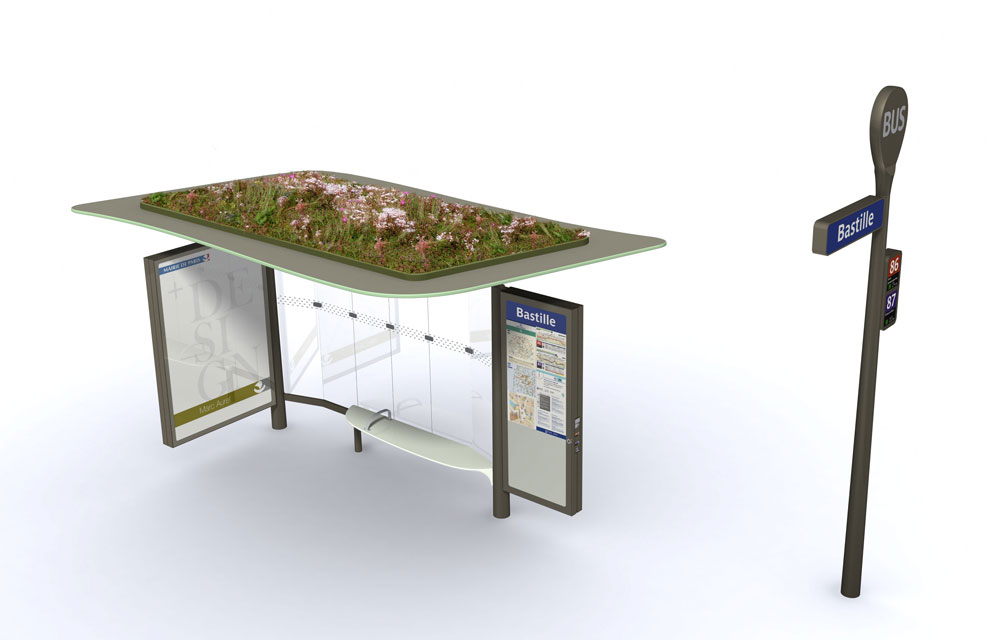 are designed to be simple with clean and modern lines that seamlessly blend in with the capital's streets. Although they come in different sizes, the shelters are all based on the same structure: an opaque plastic resin roof, reminiscent of a sycamore lead, placed on two cylindrical poles. These smooth, curved and elegant bus shelters are a tribute to the architect Hector Guimard, the designer of the Art Nouveau metro entrances which also took inspiration from the natural world and remain emblematic of Paris' image.

Passenger information has also been brought to the foreground and certain bus shelters are fitted with digital screens powered by photovoltaic panels enabling the city to broadcast useful information in real time.

Other cities around the world have also chosen to combine utility and pleasure by using various polymers. Artists and designers were given carte blanche to create fun spaces. At Minneapolis, in the United States, bus shelters were fitted with gigantic and colourful plastic flowers, turning the passenger areas into giant plant pots. In Lexington, also in the United States, a designer chose to replace the traditional glass partitions with a structure made from green PET bottles. Depending on the sun's position in the sky, the interplay of light and shadow is particularly striking.

LEDs, polymer-based bulbs, and their extended family are increasingly present in our lives: in our vehicles, in our houses, and in our cities.

Their versatility and many colours enable cities to create an identity for themselves by creating unique, pleasant and safe spaces. They are used in many different configurations and certain cities are putting all their creativity into dazzling nocturnal passersby. However, LED lighting was created to provide more than just visual delight. As it happens, the technology is extremely energy efficient. It provides high quality, bright and intense lighting and can reduce energy costs by up to 70%. LED lights also have an extremely long life, reducing maintenance costs as well. Some mayors have even chosen to use solar-powered streetlights in their boroughs. The principle is quite simple: a photovoltaic panel stores solar energy during the day and releases it as light when night falls.

Although widely criticised until a few years ago, and accused of visual pollution in our streets, modern store signs have become more discrete without compromising their effectiveness. The secret to their revival is in two words: polycarbonate and LEDs. Polycarbonate, a thermoformable, printable and resistant material, enables much creativity to be used for communication. Admittedly, there is nothing new in this. However, the possibility provided by LEDs for creating soft illumination and adjusting the intensity of the lighting is a revolution in itself. The future should hold many surprises, namely through the use of flexible screens made with organic polymers. The next generation of store signs should be better integrated with their environment as a result. No more should we see the visual nuisance of old-fashioned neon-bright signs.

Some boroughs have high-traffic roads going through them. A nightmare for local residents! The first noise barriers were created in the 1950s with the popularisation of the automobile. At the time, they were simple vertical slabs of concrete whose effectiveness was debatable. New barriers were developed a decade later thanks to developments in the science of acoustics. They were designed so that their shape reflected noise. They were effective, but they were not particularly attractive. The first glass barriers would be developed in the 1990s. Unfortunately, their high cost of production as compared to concrete slowed down development. The solution was found a few years later, when the glass was replaced with a polycarbonate or a PMMA whose properties were similar to those of glass. 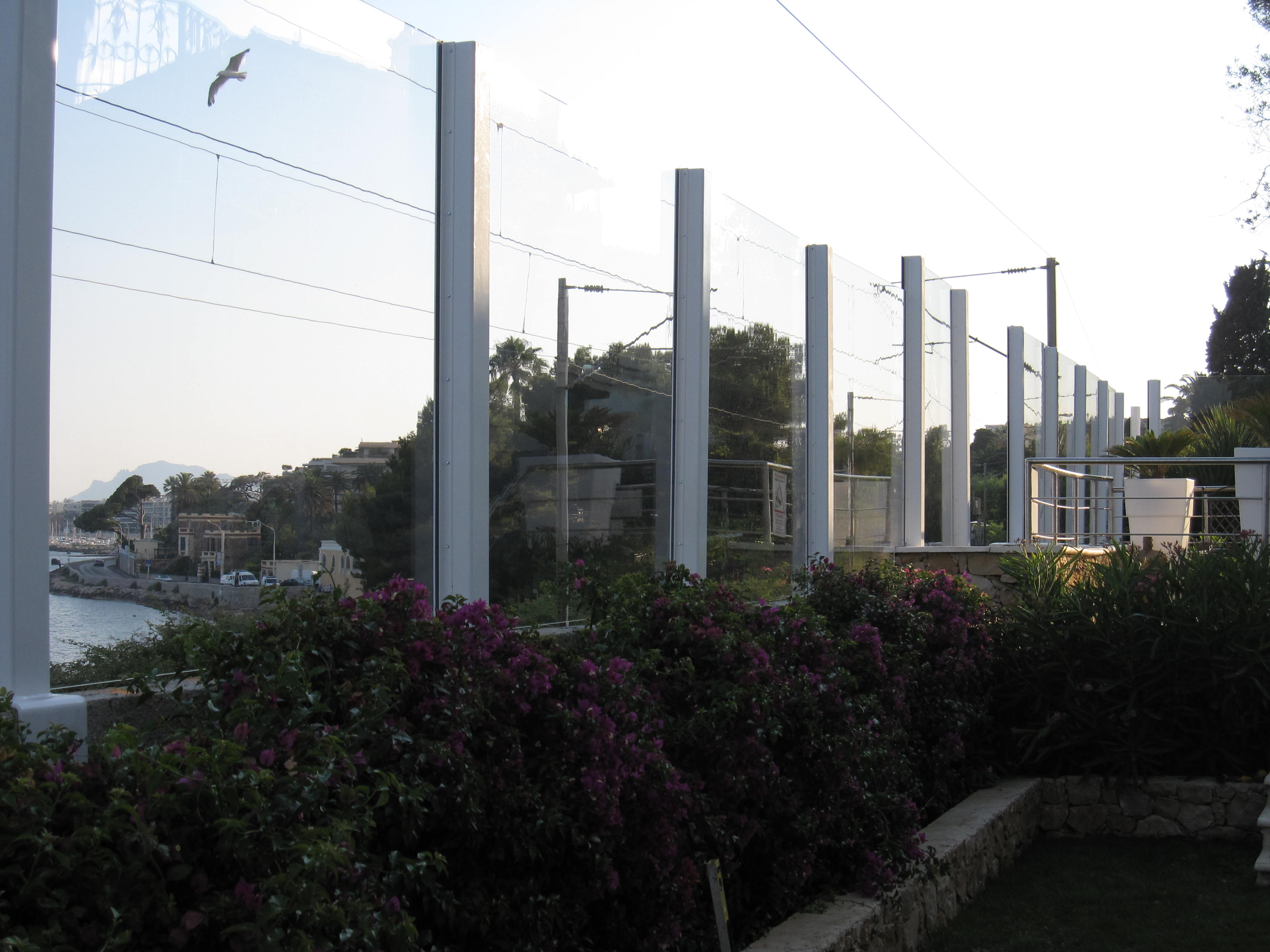 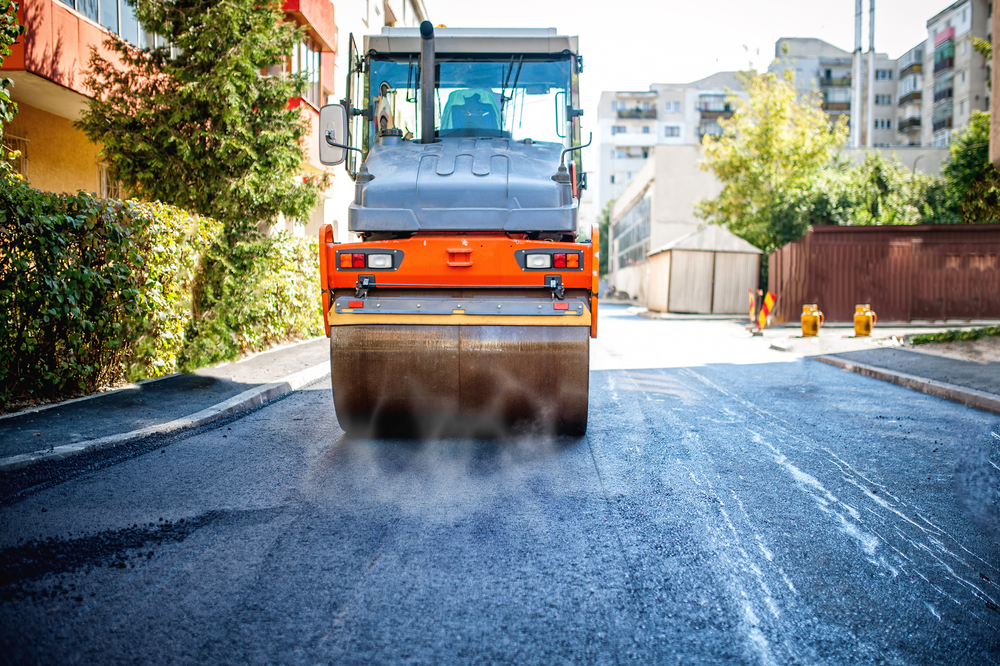 the feeling that they were not closed in on all sides. The new type of barrier contributes to improving quality of life and road safety all in one.
However, reducing vehicle-related noise pollution also requires investigating the causes. Contrary to popular belief, the noise made by a car is not entirely caused by its engine. The friction of tires against asphalt also bears the burden of responsibility. In order to reduce this unpleasant noise, some asphalts are enriched with rubber powder made from old tires, resulting in a quieter asphalt to the delight of local residents and pedestrians.

Bollards, as you may know, are those small posts used to protect pedestrian zones by creating a clear delineation between the various urban spaces. Originally made from metal, or even concrete, the bollards tended to damage the vehicles of inattentive motorists. Plastics, and polyurethane specifically, are increasingly replacing steel without jeopardizing pedestrian safety. Plastic bollards are highly shock-resistant and can bend by up to 45° without breaking. Their life expectancy has only been improved! Even better, they naturally return to their original shape after an impact. They have managed the inconceivable feat of garnering the approval of both motorists and pedestrians alike.

This is the same material used in pododactile surfaces, areas integrated into sidewalks that visually-impaired pedestrians can recognize with their feet or a cane. The surfaces can be used to signal caution or simply the entrance to a pedestrian crossing. Polyurethane was the natural choice for the purpose due to its high resistance to friction. 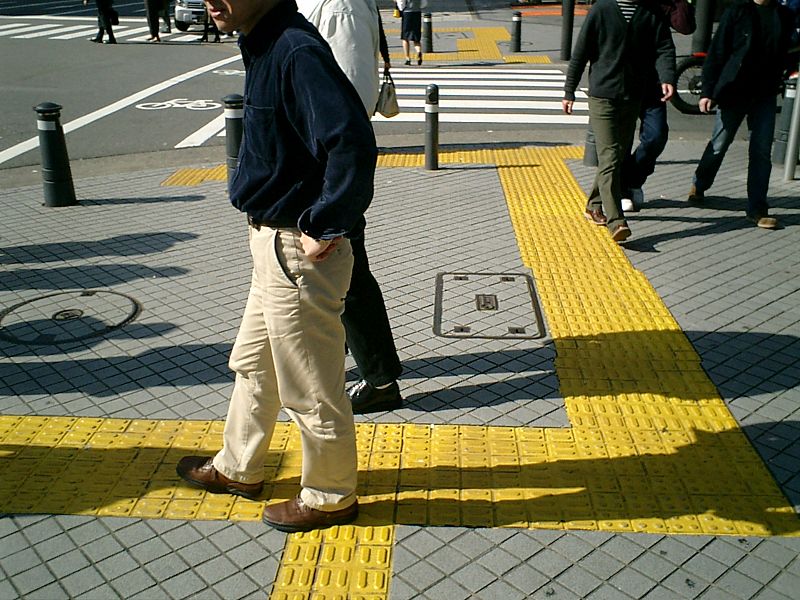 One cannot mention urban furniture without talking about children's playgrounds. 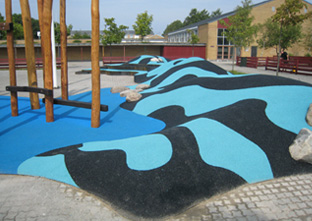 Polymers have been gaining ground in this area too. There are several reasons explaining their increased use: children love their fanciful shapes and vivid colours that so resemble their own worlds. Parents greatly appreciate not having to comfort children with splinters in their hands. Local authorities love PEHD, the material used on playgrounds, for its long life and the low amount of maintenance it requires. Incidentally, an increasingly large number of playgrounds have flexible surfaces made from rubber granules cast into a polyurethane resin. The surfaces, available in all colours and various thicknesses, were designed first and foremost to cushion a child's fall and therefore avoid an injury.