The Plasticarium collection, a showcase of artistic creation

A new start: from the Atomium to the Plasticarium collection

The new Art and Design Atomium Museum recently opened in Brussels under the biblical acronym of "ADAM" is intended to be a "beyond the spheres" extension of the flagship monument of the 1958 World Fair. But rather than a "tenth atom", the new museum embodies the latest artistic and cultural expression of the event. As if, next to the iron crystal magnified 165 billion times, the capital of Europe wanted to finally honour the other source of its prosperity: plastic. A way of adding, with the Plasticarium, whose permanent collection was brought together by Belgian artist Philippe Decelle, the designer's ideal to the engineer's technical performance.

A few days after the museum's inauguration, "Plastics The Mag" wanted to share with its readers a visit of this new temple of design conducted with semiotician France Billand and Richard Thommeret, a chemical engineer and professor of Industrial Design and Interior Architecture. These two guides are fully qualified to decipher the meanings of the creations brought together within the ADAM.

Design and plastics, at the heart of the Economic Miracle

Nothing good usually comes from a nonconforming artist being forced to take over his father's factory. Except in the Italy of the Economic Miracle, where it took more to thwart an artistic vocation. The best proof of this is the extraordinary career of Cesare "Joe" Colombo who, eager to revive the family business with his brother, explored the possibilities offered by plastics starting in 1960, before emerging as a leader for a whole generation of transalpine designers. The Plasticarium collection has some of the iconic pieces he created before his premature death in 1971. The first of these is the Universale chair produced by Kartell in 1967, which starts the visit.

"Obviously!" exclaims France Billand who sees in the first injection-moulded ABS chair "a summary of all the promises offered by plastics to designers born in the 30s, most of whom trained at the Politecnico di Milano": a one-piece chair suitable for mass production, in various colours, and easy to stack as it is light and able to be adapted to various heights depending on its intended use: standard, high chair or bar stool.

It would take a generation before European design could fulfil the mission that Walter Benjamin set "the Work of Art at the time of its mechanical reproducibility": fostering a calm individual sensibility against the murderous impulses of the totalitarian culture of the 30s. Thanks to "Joe" and friends, this was achieved: form finally supplanted force!
Some say it with flowers, like Enzo Mari and his Bambu vase made from PVC extruded into the shape of truncated Roman columns which, with no little trace of irony, definitely ruin the dreams of grandeur of the Mussolini era. 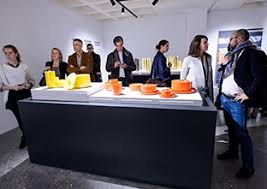 Others seek to seduce by entrusting their inspiration, both literally and figuratively, to these plastic materials injected by blowing into their moulds, a veritable matrix in which their mark is infinitely reproduced to satisfy consumers' desires. These "almost perfect" artefacts born of this process do not show any traces of assembly or welding. There is no roughness, either. ;
"Even when they are comprised of several parts, each fulfils its role without revealing its joints" concludes Richard Thommeret.

The era of metamorphoses

An organic intellectual, the designer is not a mechanic. His taste for form hides a veritable passion for the polyvalence of sophisticated objects, whether intended for personal or professional use, such as the Boby trolley-cabinet created by Joe Colombo in 67. With its brightly-coloured, rounded, moduled drawers and cupboards and its wheels, it is the ideal extension of the bodies of the creatives who serenely work, in offices and laboratories, in the professions of the post-industrial society.
MThanks to the magic of plastics, some objects can even be used for different purposes without changing shape. All that was needed, for instance, was for the wife of the founder of Artemide, Emma Gismondi Schweinberger, to reduce the size of his Dedalo ABS umbrella stand to turn it into the Dedalotto vase or the Dedalino pen holder.

Another advantage of mass production, the user is free to imagine several items of furniture to be built from a single module. According to this principle, Rodolfo Bonetto, jazzman and subsequently self-taught designer, played around with the idea of the partition of the circle to offer, depending on the mood, the possibility of using the four ABS sections of his "Quattro quarti Modular Coffee Table" as a wall bracket or a corner shelf. 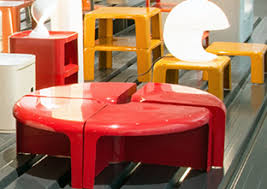 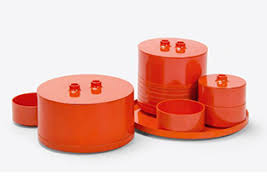 The emergence of design is not limited to the refusal of time-consuming mechanical assemblies of heterogeneous materials. It is also a rejection of the bourgeois interior, of its dreary-toned 19th century atmosphere, its shamefully materialistic furniture covered in opulent and varnished veneers.
With plastics, there is no more need for surfacing and finishes. It is the pigment incorporated into the resin that sets the tone. Material and light mingle with a spontaneity that encourages all subversions. Difficult not to succumb to the loud colours found in advertisements, magazines and comic strips, now magnified by Pop Art.

The bold colours, red, yellow, and blue give a fun dimension to furniture. Worse yet, they invade the table, the altar of the bourgeois coterie. White ceramics, with or without ornaments, give way to brightly-coloured resins such as the lemon or tomato-coloured melamine of the Heller de Lella and Massimo Vignelli-designed tableware.
Black and white were not entirely banished from interiors, but thanks to the smooth and shiny plastics, their symbolism was renewed, leaving behind all ideas of mourning or virginity. A guarantee of comfort and serenity, they even fade in the light to play, in light fixtures and other technical objects, with the transparency of acrylic polymers.

The medium of the Global Village

With technical objects, designers have a new field in which to express their talents beyond the domestic sciences. "Unsurprising, really", according to Richard Thommeret, because "as they can withstand temperatures above 100°C, like acrylics, the malleable, light, strong, insulating and even transparent plastics outperform even metal in all respects in this field." With the rise of mass media, they are free to leave the kitchen and move into the living room through transistors, televisions and other pick-ups. From the outset, these products sell themselves as mobile objects through their shapes and lightness. A prime example of this is the Teleavia P 111 created in 1966 by French engineer Roger Tallon. In addition to its ovoid ABS shell, it is recognizable because of its face covered by a tinted polymethyl methacrylate (PMMA) screen designed to rest the eyes and create an opaque veil when the TV is turned off. 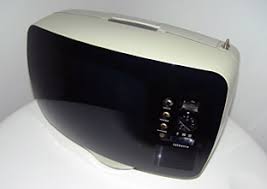 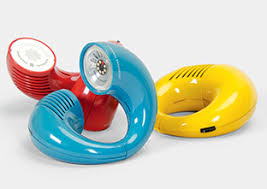 In a more playful vein, the Plasticarium's long showcase also contains the astonishing "Toot a Loop" transistor created by Panasonic in 1969, a sort of ear trumpet transformed into a bracelet that looks like the ancestor of the walkman or, more recently, of the current IPod. Another surprise is the UFO record player created by Patrice Dupont for Philips. With its round hood made from translucent acrylic dyed red, blue or grey, and its black and white ABS body, this UFO could be powered by electricity or batteries and was most definitely a "truly mobile and unusual" object. And that's not all! The Plasticarium's designers made it into a sort of missing link, a precursor to the iMac G3 that is presented as the final highlight of the collection.