Plastics have no fear of heights

Nylon has the right stuff

In Europe, Nylon was a gift from above, an innovation that literally fell from the skies in June of '44 thanks to the boys of the First Allied Airborne and their parachutes made from DuPont's famous 6-6 polyamide fibre. 60 years later, this synthetic fabric is still in use, sharing the company of more recent technical textiles and other materials from polymer chemistry, in most sports derived from parachuting..

Even further in fact, as these materials play a major role in all so-called "extreme" or "risky" sports, on land and on water. Beyond the simple fact of sliding, they share the trait of defying the laws of gravity. Whether in terms of weight or impact, whether the sport entails paragliding from the top of a canyon or going down its walls on two wheels, there is no room for improvisation! At any given second, the slightest technical or material failure could be fatal. This is the famous "Point break" where materials, through their lightness and strength, must slow down or prevent the fall, and, as a last resort, protect from impact. A source of adrenaline and the ideal test-bed for plastics.

Aerobatics, formation skydiving (relative work), parachute formations…
Some enjoy the exhilaration of the fall before opening their parachutes. Others prefer soaring, taking advantage of updrafts or using an auxiliary force, such as a paraglider or a paramotor. In any case, their future literally hangs by a thread. The thread in question is that of the synthetic fibres that make up most of the 600 parts required to manufacture the parachute, the shroud lines and other equipment such as the container bag and its harness or the paraglider's swing seat. Polyamide, much like Nylon, still reigns supreme in canopies where polyester fibres play second fiddle, in hybrid or laminated textiles, where they have a secondary function: UV resistance, abrasion resistance, elasticity, etc.

Unlike parachute canopies which tolerate a certain degree of porosity in order to absorb vertical shocks upon opening at the end of a freefall, the aerodynamic wings of paragliders must channel the horizontal airflow to improve the aerodynamic efficiency of the trail. This is why they are coated in polyurethane in order to obtain very low porosity canvases on the lower surface and impermeable canvases on the upper surface.

Performance hangs by a thread

Slowing a fall by using air resistance is one thing. Holding on, and controlling the fall is another thing entirely. This is where the parachute shroud lines come into play. The choice of fibres from which they are made are the result of a compromise aimed at meeting conflicting requirements. First of all: elasticity. Elasticity is required when opening a parachute, when the speed of the fall abruptly changes from around 200 to less than 20 km/h and they have to withstand an elongation of around ten centimetres and return to their original length. As the sole component absorbing these tensile forces, the core of these cords is made from Spectra- or Dyneema-type Ultra High Molecular Polyethylene threads (UHMPE), or Kevlar-type aramid, which is less sensitive to heat. A polyester sheath protects the core from abrasion, humidity and various rays.

Given the use of synthetic fibre canopies that are very lightweight and do not occupy much space when folded, weight and bulk reduction efforts lead to using the same materials for the containers and the harness straps, and to replacing most metallic parts with rigid plastic frames and reinforcements. 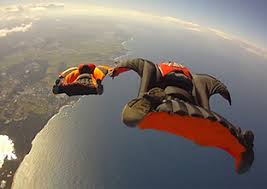 Adrenaline junkies enjoy gathering in small groups around their favourite spots or figures. This is how equipment changes, differentiates itself and new disciplines such as Base jumping, inspired by free-flying and paragliding, appear. Base jumping involves jumping from a platform at a height of at least sixty metres, a sufficient altitude from which to deploy a ram-air parachute derived from emergency parachutes. This discipline is often association with a prior flight in a wingsuit, a suit that has ram-air wings similar to a flying squirrel's natural shape.

This practice, which is reserved for a few insiders, is experiencing difficulties in developing materials specific to the sport. Convinced of the fact that current wingsuits "do not enable one to fly, but rather to fall with elegance," American researcher Tim Sestak advocates the use of polymer membranes which are smoother and have leading edges reinforced with composites to improve gliding and lift. However, his team has to find new funding before it can hope to compete with the bat-winged superhero.

All aerial sports pioneers are not playing on a level field. Switzerland's Felix Baumgartner, for instance, had the technical and financial support of aeronautical equipment manufacturers for his parachute jump from the stratosphere. The jump required nothing less than a pressurised capsule with a fibreglass hull, a helium-filled polyethylene balloon measuring around one hundred metres in diameter, a suit and a helmet made from composite materials, transparent polymers such as Vitrex, and multi-layer clothing intended for space flight. Yves Rossy, better known under his pseudonym of Jetman, is not far behind. Thanks to the support of wealthy patrons, the first jet-propelled flyer did not have to think twice to entrust the construction of his honeycomb-structured rigid carbon-Kevlar wing with four jet reactors to a subsidiary of the Swiss Carboman group which specialises in composites.
Even though they require indisputable physical and technical properties, their respective performances do not realistically fall under the requirements for sport.