Bikes get a boost with carbon

What are composite materials?

A material is said to be a composite when it is composed of at least two components whose respective qualities complement each other and form a single material whose overall performance is improved as a result. A composite material is usually composed of a reinforcement, which is generally made from fibres or strands, and a thermosetting resin. The reinforcement, usually carbon or glass, provides most of the mechanical properties. The resin acts as a binder and also provides its basic mechanical properties. The reinforcement in itself is flexible: it is only when combined with the resin that its stiffness is increased tenfold. In competition bicycles, the carbon fibre/epoxy resin combination is by far the most widely used for its rigidity and lightness. So, when talking about carbon materials, it should be understood that what is actually being referred to is a composite material and, more specifically, an alloy made from carbon fibre and a polymer resin. 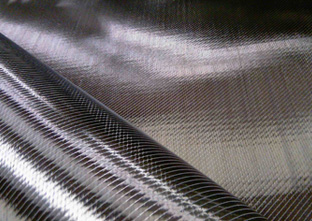 En In 1903, Maurice Garin won the first Tour de France with a bike weighing over 20kg. One hundred years later, bikes have undergone a serious weight-loss program; so much so that the International Federation of Cycling now requires bikes to have a minimum weight of 6.8 kg. However, this particular development did not happen overnight. Initially made from steel, competition bike frames went through a transitional phase that was a boon to the aluminium industry. Titanium was next and now, for the past ten years, it has given way to Kevlar and carbon fibres. The latter started a revolution because, besides the obvious weight reduction, manufacturing techniques also evolved, enabling the frames' design, performance and aerodynamics to be improved. 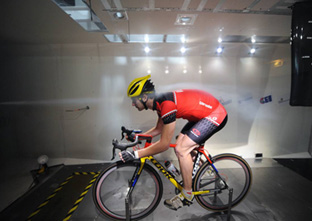 The major bike manufacturers put their latest designs in the wind tunnels that were originally developed for aerospace technology. It may seem odd, and it would be reasonable to ask oneself whether aerodynamics play such an important role when cycling at an average of 40 km/h. These tests are carried out not in order to gain a few metres, but rather to increase overall stability. Professional cyclists going down a mountain pass can easily achieve speeds of over 100km/h, all on a vehicle of which only a couple of mm² of its tires are in contact with the ground. At such speeds, the slightest mistake can be fatal. This is where aerodynamics come into play, ensuring that the aerodynamic forces push the bike firmly down against the ground. Aerodynamic studies emerged alongside the use of composite materials. Because these materials are so easily moulded, it is now possible to design the oddest-looking parts that still conform to the laws of aerodynamics; however, the same can't be said for metals.

Frames have their own revolution

To neophytes, a bicycle frame is an assembly of tubes for supporting the wheels, the drive system and the cyclist, of course. While that may have been true in the days of Eddy Merckx, making such an affirmation in this day and age would be an insult to the engineers who design the frames. Although the principle of the tube remains valid for many carbon frames, they are no longer welded together; they are glued to each other. Pushing innovation even further, competition bike frames are moulded from a single part - a feat that can only be achieved thanks to composite materials! Because they are stiffer, thereby providing better performance, these high-tech frames have also reduced the amount of vibrations at the joints. The end result for cyclists is more speed, increased comfort and safety. Thanks to carbon technology, frames have evolved as much in the past ten years as they had over the previous century. 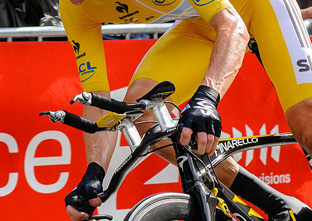 tAs always, when it comes to high-level competition or professional sports, these bikes are not available to the common man, and not only because of their prohibitive price. In fact, these frames are so "technical" that they should not be used by just anyone. They require a great mastery of the sport of cycling. They are so rigid, it's a safe bet that "John Everyman" would simply fall over at the first corner. In the world of cycling, rigidity often means performance. The more rigid the frame, the less it will deform. The energy expended by the cyclist therefore only serves to turn the wheels. This exceptional rigidity is due to the carbon fibers and the plastic resins used. Contrary to popular belief, the primary objective pursued by frame manufacturers is not weight reduction but rather performance. There is currently no better solution than the combination of carbon and epoxy. 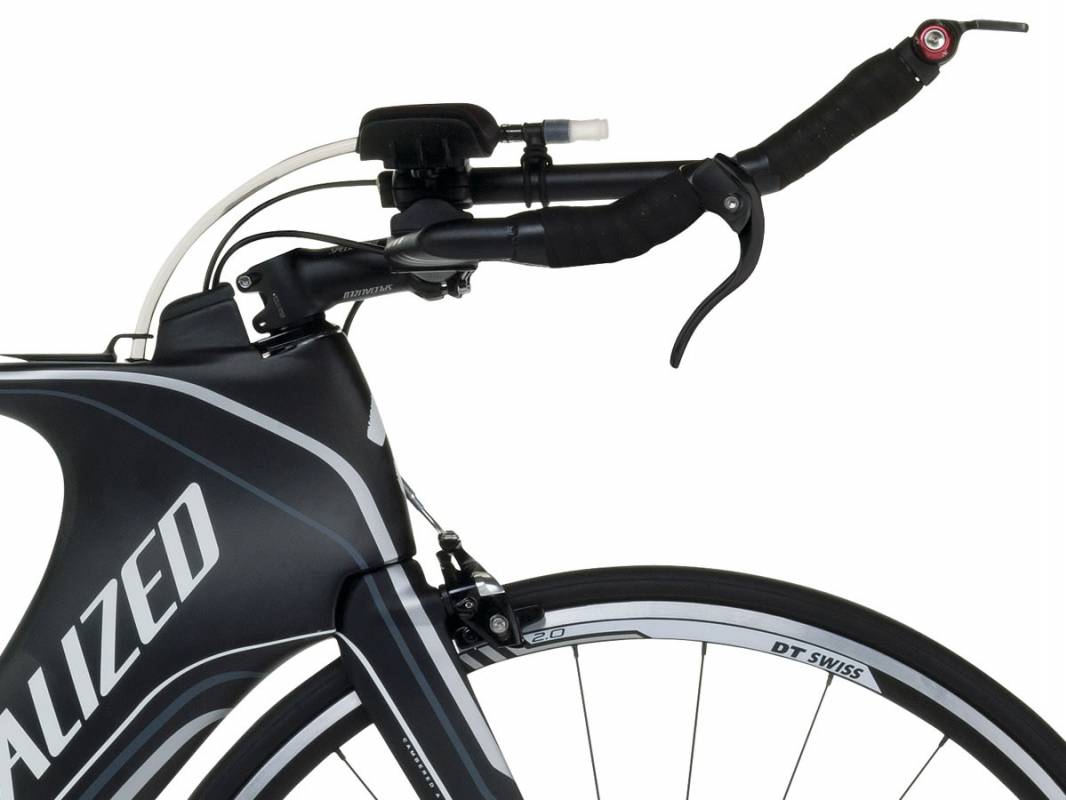 Manufacturing techniques have been perfectly mastered, although it was no mean feat getting there. As so often happens with new materials, it was necessary to tame it first. Step by step, manufacturers improved their techniques and learned to "weave" the material to give it greater rigidity or more flexibility. Progress has been incremental. More than ten years later, frames have become true works of art. Each one is different in its own way. Each part has its own function and requires a specific shape. The seatstay, for instance, which is the rear portion to which the wheel is attached, is literally sculpted in order to obtain the best possible performance. The same goes for the front that bears the brunt of the wind. This type of precision work would have been impossible using metals given that composites perfectly espouse the shapes of the mould and therefore enable the most daring and even quirky designs to be brought to life.

Wheels that cut through the air

Bike frames have evolved, but what about the wheels? They also followed the same path and, once again, the uninitiated would not suspect the number of hours of research that were necessary to achieve such levels of performance. Competition wheels are also made of carbon. The aim, again, is attaining the best possible levels of performance. When pedalling, cyclists exert compressive stress on the equipment. Metal rims tended to deform slightly on each pedal stroke, and therefore tended to scatter the energy expended. Carbon is so rigid that the rims no longer deform and every one of the cyclist's movements is as effective as is possible. 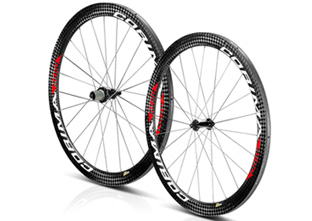 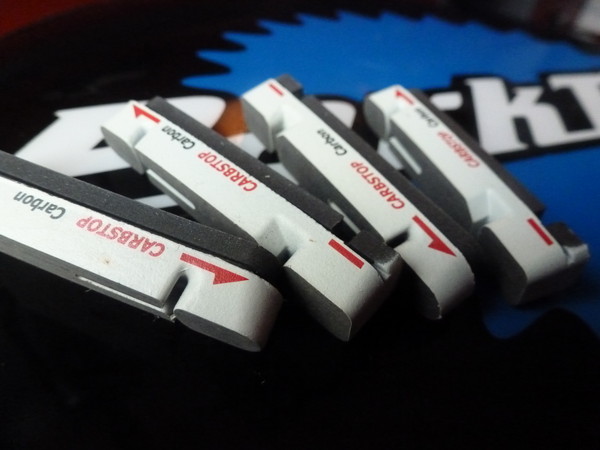 Alas, nothing is perfect. Although this type of wheel is great on dry ground, it is much less effective when it starts to rain. The main drawback is very poor braking. Traditional rubber brake pads adhere very poorly to carbon rims. Good for a few scares, if anything! Manufacturers are aware of the problem and have developed a new type of brake pad made from carbon and epoxy resin which significantly improves braking. Another line of research is currently being pursued which involves coating the part of the rim that comes into contact with the pad with a polymer resin (whose composition is kept secret) ensuring a better grip for the pad and therefore better braking. As promising as this solution seems, it still tends to heat up the rim during prolonged braking. More breakthroughs are needed and forthcoming.

Tyres glued to the road

Bicycle racers do not use ordinary tyres; their bikes are outfitted with what is known as tubular tyres. As their name suggests, these are types of polymer tubes that are glued directly onto the rim. 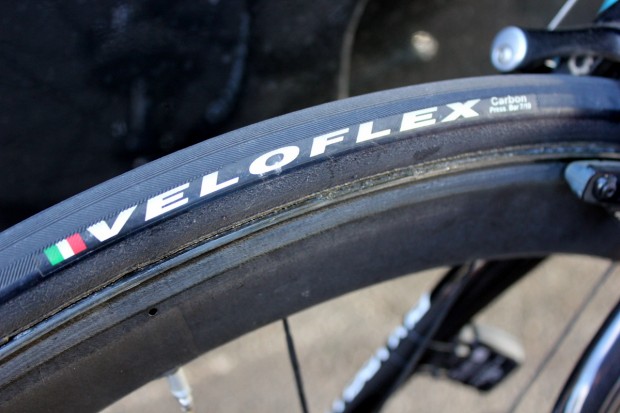 Tubular tyres can be changed quite rapidly and enables the cyclist not to lose too much time in the event of a puncture. But this is not the only reason for their success. In order to move forward, cyclists have to contend with various friction forces including that related to wheel/road resistance. The cyclist's sole objective is focusing their energy to go faster. However, traditional tubular tyres tend to deform and shear under pressure. In short, they resist and cause a loss of energy. Manufacturers therefore have to discover the right formula. Although natural rubber is still widely used, polyester, which is known for its resistance to deformation and its lightness, is increasingly used in the composition of the liners (inside of the tubular tyre).

As we have seen, carbon is gradually taking over all aspects linked to a bicycle's performance. But that's not all. It can now be found in pedals, braking systems - handlebars and handles - and even in the saddle. The main goal is weight reduction, and particularly increased aerodynamics and ergonomics. The latter is crucial to cyclists' comfort, given that they spend several hours per day on their bikes. And when composites have nothing better to contribute, plastics take over. An example of this is Rilsan®, a biosourced polymer developed by Arkema, whose lightness and resistance qualities have ensured that it has found many uses in the manufacture of structural elements for bicycle seats. 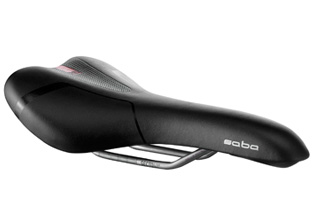 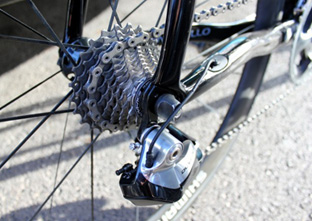 Tour de France cyclists won't soon be using electric bikes! There is one part of the bicycle that polymers have yet to make their mark on - transmission. At the moment, metals still have a bright future ahead of them. Polymers have managed to gain a foothold through polymer lithium batteries that power the derailleurs. The latter were made electric in order to obtain increased precision during gear changes. When they appeared in the early 2010s, the derailleurs were fitted with a battery attached directly to the frame. Cyclists were not impressed due to the batteries' lack of aerodynamics, their unsightliness and the fact that they took up the space usually reserved for a bottle. With subsequent technological development, the batteries were made even smaller and can now be fitted inside the seatpost. The electrical cables are installed inside the frames and are therefore rendered perfectly invisible and immune to turbulence caused by wind.