Designers are fascinated by more than just seats! Urban furniture, and more generally how to live together in cities, are topics that seem to be close to some designers' hearts. Many projects are popping up everywhere and it is clear that many of them have a strong humanistic component. Let's take a detailed look at some of them.

Speed dating for a bench

of the bench was a stroke of genius from a young German designer. Made from wood and polyurethane, the bench is fitted with eight speakers and two subwoofers delivering a total high- quality sound output of 95dB for a total of 480 Watts! The Boombench can be activated and controlled directly via bluetooth and used to listen to the songs on your mobile phone or tablet. The Boombench is designed to be a vector of sociability because its creator believes that music is one of the best ways to strike up a conversation. More than a simple bench on which to sit and relax, the Boombench was designed to be used to meet people and break up the individualism inherent to large cities.

If only road signs could show me what I'm actually looking for. Is there anything more depressing than staring at a sign giving directions to the post office when 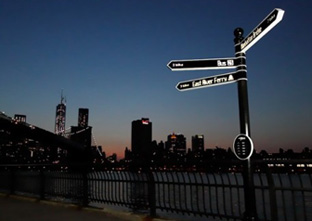 you're looking for the station? A few young Americans solved the problem by creating "Points", the first interactive signpost. It is made up of three adjustable polycarbonate arms which can provide information based on request. The arms are in fact LCD screens which, thanks to a geolocalisation system, can display real-time information on local points of interest, transport and events based on content collected from various sources on the Internet.

A dry seat every time, thanks to the rolling bench 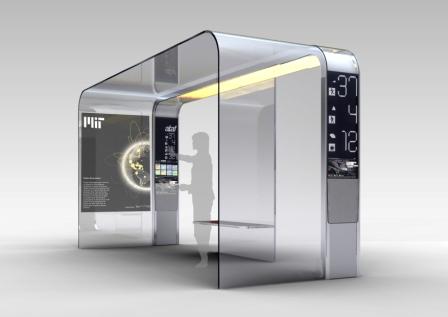 It might sound like a joke, but take a closer look. How do you sit on a bench after it has rained? Ideally, you have to wipe it dry, but few people think of taking a towel with them when they are out and about. As always, the simplest ideas are often the best. The bench's creators equipped it with a crank that can rotate the seat and bring up the dry side. This bench, which is particularly elegant thanks to the purity of polycarbonate, could easily become a feature of the world's nicest avenues. 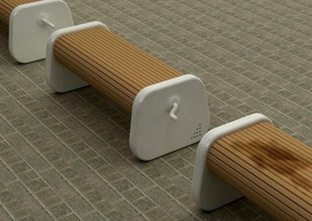 It all began as a concept for celebrating Twitter's anniversary. The Paris Mayor's office asked designers to design intelligent urban furniture

through which it could maintain permanent contact with its citizens through Twitter. The result was surprising to say the least! The bus shelter made from a single piece of PMMA is a complete success in terms of design. It is fitted with various screens enabling the local authorities to instantly disseminate information while maintaining a link with tweeters who can add their own comments at any time.

With such a design, the Koru bike rack should easily fit in atany park or public garden. Ferns and their looping leaves were the source of inspiration for young creator Jonathan Hall. The height of the looping leaves/stalks can be adjusted to secure parents' large bicycles and their children's' small bikes. The metal stalks are covered in a polymer resin in various shades of green. The designer was particularly inventive in ensuring that the bike rack's length is modular and is able to adapt itself to the number of spaces available or the potential amount of users..

A bench for philanthropists…and misanthropes

It seems that benches are a great source of inspiration for creators. What can you do when an unpleasant person sits beside you while you are enjoying a rest? People generally turn their backs to them, or go and sit somewhere else. Mutlu Kilinçer, a Turkish designer, resolved this embarrassing problem by creating a bench using sliding seats. The pretty plastic seats slide along on a metal bar and can be moved around by users. Finally, here is a bench to please everyone, even the most taciturn.