Although the world's major capitals are using urban furniture to polish up their image, the majority of small boroughs do not have the budgets to do the same. Nevertheless, urban furniture is a necessary element for creating a pleasant and functional living environment. As a result, they are increasingly appealing to furniture manufacturers who use recycled plastics. It has even become a major market for the plastics recycling industry. 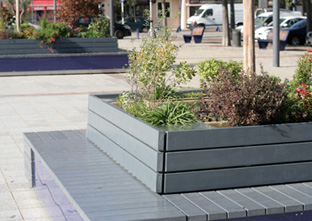 Used plastics have found a new lease of life in urban furniture. In fact, many mayors find it to be the ideal material! For good reason, as it is extremely resistant, impervious to mould and rot, dyed throughout so it is not affected by scratches, and, most importantly, 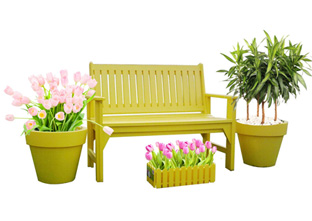 it is inexpensive. In short, it's virtually indestructible! Benches installed in inhospitable areas, such as zones that flood in high tides, have retained the same appearance several years after they were first placed. Another significant advantage is that this plastic does not require special maintenance and can be easily cleaned when it has been covered in graffiti. These are all convincing arguments that urban furniture specialists use to sell their products to boroughs who wish to contribute to saving the environment on a budget. Although some designers are using recycled plastics in original designs, their use remains a purely functional decision.

Planters, benches, picnic tables, baskets, bins, bollards, fences and even children's playgrounds… the list of urban furniture made from recycled plastics seems like it could go on forever. You can hardly take a step in the city without tripping over an object made from these materials. Out of interest, making a bench uses up 3,000 used bottles. 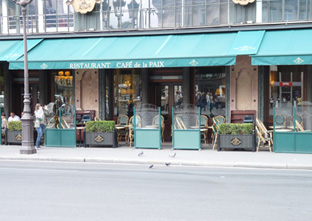 And that's the whole point of the process, because although common plastics such as PVC and the polyethylenes are often criticised, they are in fact extremely recyclable and are useful for more applications than simply making wheelbarrow wheels! All the better, in fact, because Europe's efforts to generalise selective sorting and raise awareness among its citizens require finding profitable uses for materials destined for recycling.

A bottle = a gift

Some believe that a helping hand would improve citizens' enthusiasm for selective sorting. The city of Sydney, Australia, has decided to rewards its citizens who recycle their plastics bottles. Intelligent containers were installed in various parts of the city. The machines can hold between 2,000 and 3,000 bottles and give out gifts during each collection. This initiative is a way of encouraging the population to recycle its bottles, as over 10,000 bottles are thrown away every hour in Australia instead of being sent away for recycling. For the time being, three such machines have been installed, giving out gifts such as bus tickets, gift vouchers or a 10 cent donation to the Clean Up Australia charity. With only three collection points, the system is so successful that it should soon be extended to other parts of the city, and even to other boroughs. 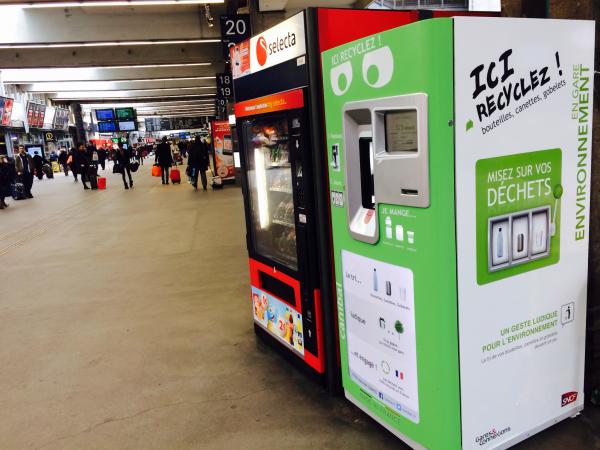 The principle of rewarding "good students" inspired the young French start-up that designed Canibal, a bin for plastic waste such as cups and bottles. A particularly original concept given that the machines are installed within the premises of companies, usually next to the coffee machine. The system also gives out gifts of free coffee or a donation to a charity every time the machine is filled up.

An award to encourage designers

As mentioned earlier, designers are still not using enough recycled plastics and yet...their great versatility is a considerable asset for creators. To encourage their use, 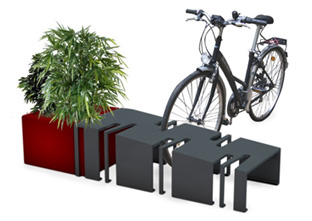 Coca Cola invented the Sustainable Design Award to reward the creation of a useful and innovative object made from consumer product packaging. Marion Steinmetz won first place in 2012 with the Velopark, a creation recycling soda cans and plastic bottles. The Velopark is in fact much more original than its simple and pure lines might lead us to believe, as it is a bicycle rack, a decorative object and a bench all rolled into one.

Moving away from urban furniture for a minute, the Dutch Recycled Park project aims to recover the plastic waste floating in the river running through the heart of Rotterdam before it reaches the North Sea. Once the waste has been recovered, it is recycled and transformed into hexagonal blocks attached to one another like the pieces of a simple puzzle. The project's ultimate aim is to build floating parks measuring several square metres across on which various plants can be grown. The project receives support from the borough of Rotterdam and the city's port authorities. An architectural firm teamed up with Wageningen University and the Better Future factory to design floating platforms able to block, sort and swallow up floating waste. Once the waste has been collected by the platforms, called "Plastiek Visser" (Plastic Fisher in Dutch), the organic waste is regurgitated into the river and the other waste is recycled and used to make the floating park. 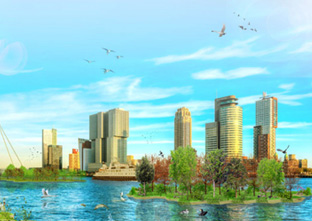 What would London be without its iconic red telephone boxes? 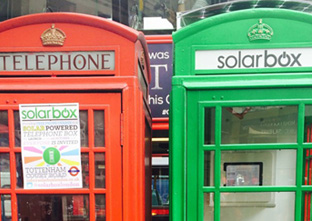 Telephone boxes, in London as in other cities, are losing ground due to the widespread use of mobile phones. London's citizens, however, were not about to let a part of their common soul be thrown onto the trash heap. Two young British entrepreneurs created Solarbox based on the brilliant idea of recycling the telephone boxes into recharging stations for mobile phones, tablets and other devices, giving the boxes a new lease of life in the process. This innovation required redesigning the old boxes from the bottom up by adapting them to current environmental and energy concerns. As a result, the boxes were painted green, are solar-powered and instead of offering a phone, they are fitted with electrical outlets enabling users to recharge their mobile phones at any time. 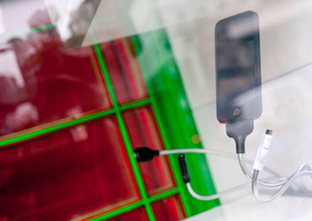 The roof of the Solarbox is fitted with a solar panel and users will find a monitor and four electrical outlets inside the box itself. A battery stores the solar energy produced for several hours, offering the same level of service at any time of day or night.
Charging stations can be used free-of-charge as the project's profitability is ensured by an integrated advertising system. While waiting for their batteries to go into the green, users will be able to watch adverts on the screen fitted in the box and enclosed in an elegant polycarbonate cabinet.

Road and street maintenance is costly and time-consuming. Especially in Canada, where road surfaces degrade quickly due to climatic conditions. The city of Vancouver has developed a new additive based on used bottles and yoghurt pots to be used in asphalt for making repairs. The process is still relatively expensive but it is expected to create savings in the long term. As it requires less heat to produce and lay down, it reduces the energy bill by 20% as compared to traditional asphalt and therefore reduces greenhouse gas emissions. The mixture can also be applied at low temperatures, a significant advantage in a region with heavy winters. In Vancouver, it is estimated that the city could recycle 70 tonnes of plastic per year and reduce its CO2 emissions by around 300 tonnes per year by using the mixture for all its asphalt works. This initiative is part of a broader goal for Vancouver, which is aiming to become the world's greenest city by 2020.