A festival of plastics

Polymers in the service of the temporary

Forums, fairs… these two related words refer to places where civility has been expressed during events devoted to trade and entertainment. They punctuate the days of local life, from small towns to metropolises, and continue to thrive despite globalisation.
Europe is unrivalled in this area: around 15,000 trade fairs and shows take place on its territories every year, across a surface of some 53 million square metres. In addition, thousands of congresses, festivals and other public relations events bolster these figures.
These spaces that need to be dressed and fitted for the space of a few days in order to greet hundreds of thousands of visitors act as a showcase for the event planning industry. It is an industry in which each professional must make the most of every square centimetre before quickly stripping everything away once the curtain has fallen. An industry in which heavy and cumbersome equipment is banned, and in which plastics.

Give praise where praise is due! "The Prince of Humbugs", Barnum himself, whose name evokes the circus' big top, the travelling trader's stall, the reception tent, and even the noise they all make. It goes without saying that the fabric and event planning industries are inextricably linked.
Ideal for outdoor use, the "Barnum" can also be found in exhibition halls. Most structures, including the largest, are made from polyester fabrics coated with polyvinyl chloride (PVC) and treated using antifouling or anti-UV processes. However, the membranes evolve every year. Farewell to old-fashioned carpentry! The structures take on more fluid and rounded shapes.

Very trendy domes and cupolas take advantage of the effects of new coating techniques. "Crystal" PVC uses all types of transparency and colours. In another vein, semi-transparent multi-layer membranes capture natural light while enabling images to be projected inside.
Also in vogue, the "stretch" exhibition tent has attracted all types of exhibitors, whether they are fond of exotic or futuristic design. Thanks to their nylon and elastane-based extensible membranes, they can easily fit all sorts of shapes depending on the layout of the supporting structures. A boon for event organisers who can use a single base to create a Bedouin tent, a bamboo pagoda or an intergalactic station hall for their customers.

All that is soft does not necessarily encourage softness. Because they cannot jump around on their beds as much as they would like, children love nothing better than playing around on all types of inflatables. From the bouncy castle to the obstacle course and the climbing wall, all of the forms and colours allowed by the assembly of PVC polyamide membranes are used to encourage children, and adults, to crawl, slide, climb, jump and bounce.
Installed on site by many large retailers, these attractions are now indispensable to any local event. They are so successful that the major manufacturers were almost made bankrupt by importers or leasers of mass-produced low-end inflatables. 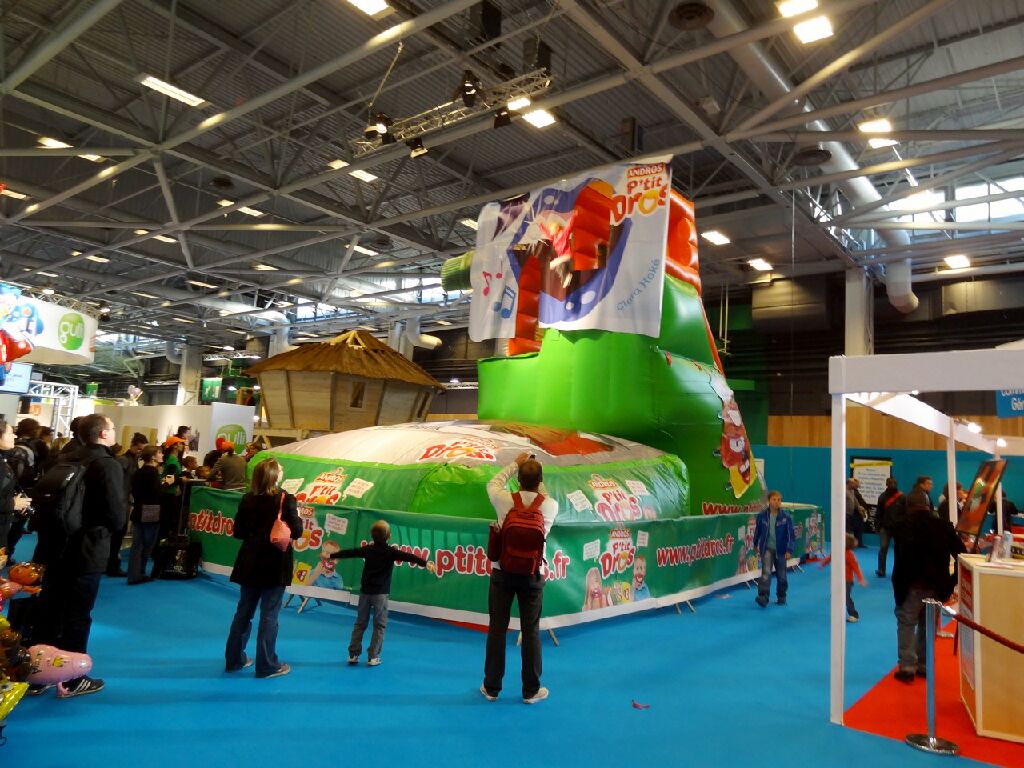 Having weathered the storm, a couple dozen European companies and specialised designers have managed to revitalise their industry by creating increasingly elaborate inflatable structures: tailor-made and customised creations whose originality and reliability have attracted event organisers, or "adrenaline" structures inspired by the high-octane rides found in amusement parks.

Space is a highly sought-after commodity in trade fairs. It absolutely goes without saying. Every square metre is accounted for. This is why it is essential to maximise the booth's capacity while setting it apart from the competition. Plastics offer a wide range of panels to achieve this partitioning. Their main asset is that they offer the best compromise between weight, resistance and aesthetics, regardless of the type of partition.
For larger booths, designers favour acrylic resin or rigid PVC panels for their excellent surface properties, whether under direct light or by transparency. Some designers prefer polyethylene or polyurethane-core aluminium composite panels that offer a wide selection of wood, metal, lacquered or mineral finishes.

Known as one of the thinnest aluminium composites, with a thickness of less than 2 mm, the HYLITE panel's polypropylene core can even be bent to create self-supporting structures. Thick expanded polystyrene core composites can even be placed directly on the floor, without a frame. Those that are laminated in solid polystyrene can be easily cut to create screen walls and perforated to look like futuristic nets or Mashrabiya latticework..

After making a fortune creating modular plastic floor coverings, Arnon Rosan strikes again with a fun process for arranging exhibition spaces. Clearly feeling nostalgic about Lego blocks, this forty-year-old from New York took inspiration from the famous Danish manufacturer's small plastic brick to create a full-sized modular construction system. The EverBlock® System relies on more than just the ease with which its three polypropylene block models can be assembled to attract exhibitors.
In order to stabilise vertical constructions, he has provided rigid PVC rods to be inserted into the two holes drilled through the eight slots of the largest blocks. This ingenious system also makes it possible to illuminate translucent white blocks from the inside using plastic cables filled with LED lights to embellish all sorts of installations created using the palette of 15 colours available in the company's brick catalogue. 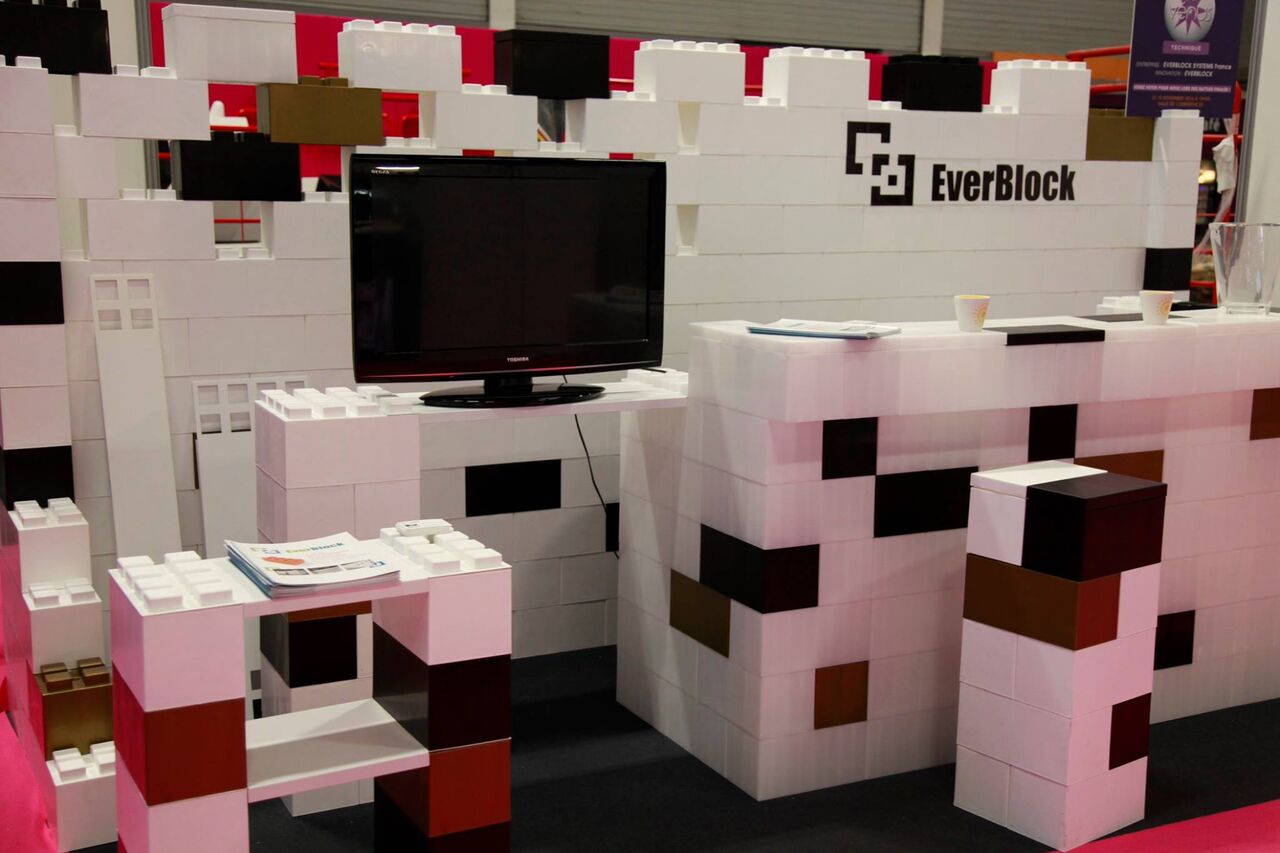