Mediaset, Italy’s foremost private media company, has recently carried out an important face- lift to its Milanese headquarters setting a new example of architectural innovation and becoming a communication emblem.
In another region, High Adige, a new Museum of Modern Art wears transparency as a deluxe garment.

In Milan, Communication Calls for Transparency

In Mediaset’s new impressive design, the dominating element is the ventilated curved façade, a ‘double-skin’ in laminated safety glass and plastics interlayer.
The outcome is a work of art for the most important media company in Italy that features a striking visual impact and acts as an enduring protection for the building.
A double skin is a sandwich made of a slice of 1,52mm of plastics within two slices of 8 mm glass, the inside one tempered and the outer one screen printed.
From a distance the façade looks like an opaque reflecting surface and when one gets closer, the opacity magically transforms into an ethereal clarity that reveals the protected original construction. 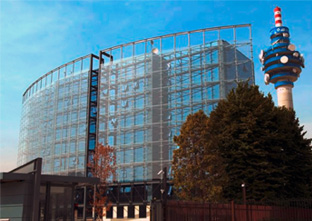 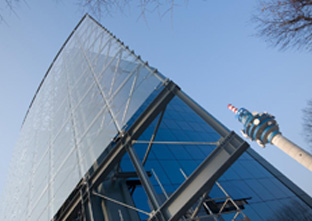 The plastics interlayer is so resistant that it allowed an almost invisible steel structure to be used with new metal fixing devices of extremely reduced dimensions for the glass panels.

Everybody is happy with the outcome

Mediaset’s employees love their new building, the builder is all the prouder that he was awarded with the Special Prize at the ‘2008 RE Real Estate Awards’, the Italian ‘Oscars’ for architecture and construction projects of significant proportions. And the Finance director is immensely satisfied to know that thanks to the mechanical properties of the interlayer, it has been possible to reduce the weight of the glass and consequently of the supporting structure for a very long time and even under extreme heats such as those happening in Italy.

In Bolzano, Art is both Outside and Inside…

Italy has always been an artistic country. It still is and always will be since it promotes the art of to-morrow. Venice Biennale is not the only proof of this devotion. Today’s news is in Bolzano, a town of double culture situated in what Italians name Alto Adigio and Germans South Tyrol. The event has a name: Museion.

A Futuristic Museum for Modern Art

How to look modern without ever being out of date? Museion’s creators, Berlin-based architects KSV Krüger Schuberth Vandreike, answered this question by classicism: A stretched cube the length of which is encased in a metal envelope at the two front ends of which large, transparent windows open to the city and surrounding landscape.

Through the glazed entrance facade, the interior of the museum, with its exhibition floors, library, education centre, shop and information point are visible from the outside.

The double glazing which forms the transparent and spatially-unmistakable entry and shop window to the ‘Museion’, also performs essential technical functions. The space between the glazing is used as an active climatic envelope. Circulating within it is air on its way between the roof and the mechanical equipment room in the basement, facilitating the efficient use of energy used for temperature control.
In addition, manoeuvrable mat glass slats, integrated in the same space, are used to modulate the ingression of daylight to the building, enabling the best possible presentation of the exhibits in line with their character. Then, after dark, the slats – at the press of a button – transform the glass facades into giant projection surfaces for projectors installed within the museum.