Plastics bring joy to the kitchen

Plastics bring a little colour to the table

It's the undisputed star of the 1950s! Melamine, better known by its commercial name of Formica, made a splash in post-War kitchens. What are the reasons behind this success story? Colours, resistance to heat and chemical attack, to light, and especially the resin's ease of maintenance. It was found to be both high-tech and revolutionary. It ushered in the early days of a design trend that brought bright colours into the kitchen. For the record, melamine was invented in 1930 but was deemed to be a lost cause. It would be a good twenty years before it would conquer the hearts and minds of people the world over. 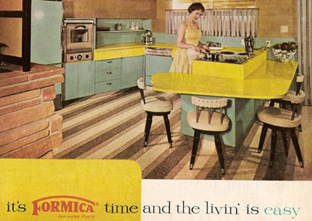 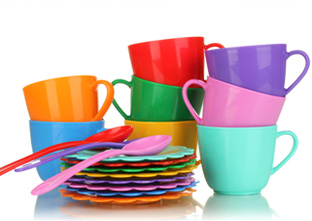 Indeed, although Formica is one of the most spectacular applications of the family of thermosetting amino resins, it is very far from being the only one... This material is easily moldable at relatively low temperatures. Due to Formica's success, the 1960s saw many other manufacturers adopting the material, contorting it into any and all forms imaginable and updating a number of utensils such as the ladle, which had up until then been made of wood and metal. As for the campers of the time, few might have known that their plates, their cutlery and their plastic cups, which were so practical and so light...were in fact made from the same material as their kitchen tables.

...and then gives way to new polymers 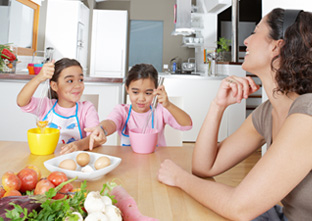 Thirty years of unfailing success isn't bad going for a material. In the early 1980s, Formica was increasingly considered to be outdated...too reminiscent of the 50s! It was granted a slight resurgence in the 1970s, adorning itself with new decorations in the form of varnished plastic adhesives but it was not enough. The fashion of the time was for homemaking; interiors were gentrified and kitchens followed suit. They became increasingly functional and were beautified, turning them into warm and welcoming spaces. They became central to the lives of families who were proud to receive their guests in their kitchen. This change of lifestyle was largely accompanied by the use of new polymers.

A wide variety of polymers

Without a doubt, the plastics industry has been a boon to that of kitchen furniture. Gradually, new materials were applied to the traditional chipboard panels. The principle remains the same, it all starts with pressed wood - an inexpensive but very brittle material - which is then encapsulated in a resin-based sandwich of PVC, ABS, PMMA, or even polyethylene and polyurethane. All of these are resins, with comparable intrinsic qualities of Formica, but which come in various matte or shiny finishes and, even better, some even offer perfect imitations of mineral materials such as marble and granite. If there is just one material that goes from success to success, it is Corian, a solid surfacing material composed of acrylic resins and mineral powders, developed by the American DuPont company. Corian is specifically intended for worktops, can be shaped to suit your wishes and is resistant to almost everything. 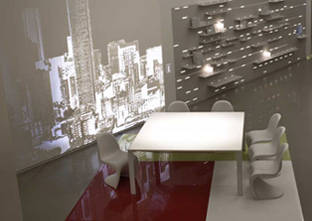 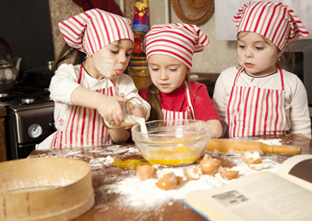 European legislation is very strict about the use of these materials in items such as worktops, which may come into contact with food. Certification bodies only grant their label when low formaldehyde content and the absence of heavy metals and halogenated compounds can be guaranteed. No reason to worry, then! Most of these materials are now also recyclable - great news for the environment.

From linoleum to PVC 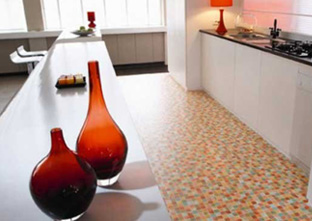 It is very common to designate plastic flooring by its name of linoleum. Let's face it; linoleum is absolutely nothing like plastic since it is a linseed oil and wood agglomerate. Incidentally, this material virtually disappeared since the turn of the 1950s and the rise of new plastics. What some still call "lino" is actually a PVC-based floor covering. Significant improvements have been made over the years, especially in the area of rigidity. Although less flexible, this material has a more flattering and upmarket appearance. In addition, certain manufacturers treat the lino to improve its antibacterial properties...which makes perfect sense in a kitchen.

Plastic are the kings of the refrigerator

Refrigerators are made up of almost 40% of plastics. Don't believe for a second that this is due only to their low weight and low cost. Far from it. Modern refrigerators use a wide variety of polymers such as ABS, polypropylene, high impact polystyrene, polycarbonate and polyurethane foam. Each has its own properties in terms of robustness, flexibility and insulation. For instance, manufacturers can use polycarbonate, which is strong and rigid, to form exterior doors, handles and body panels. ABS, polypropylene and polystyrene are used to form the interior of the refrigerator. Polyurethane is used primarily for insulation and is found in the form of foam. These plastics are recyclable, and those used for the inner walls in particular are recycled into hidden parts for cars. As for the insulating foam, it is used as fuel in specialised incinerators. 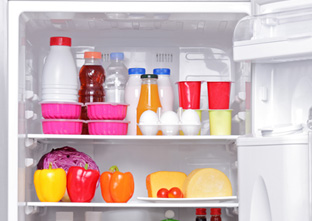 If you have lunch at your place of work and you bring your own food, you can't have missed them! Bento boxes have made the office their home in recent years. Bento boxes are compartmentalized boxes that are used to transport food. What's new, you may ask. The concept has indeed been around for a long time. Nevertheless, due to their often original design and their vibrant colours, bento boxes have become veritable fashion items. It's always a competition to find out who's is the most useful, the most fun...The bento box, a Japanese invention dating back to the eleventh century, and it is constantly being revisited; some of them even come with a bag of cooling gel to ensure that food remains perfectly conserved. These boxes are mainly made from ABS or polyethylene; they can be used in a microwave and are dishwasher-proof. The good old "mess tin" continues to thrive.

Ustensils: designers are having a ball 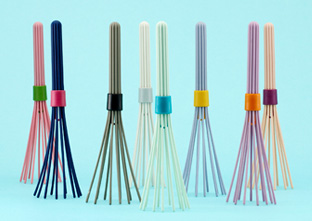 The world of utensils is where designers come out to play. The only limitations here are those imposed by the imagination. Some brands have even made utensils their domain and are now recognized as key players in contemporary design. Why are they so popular? Simply because polymers allow for flights of fantasy and the most reputed brands have changed over from metal to plastics with no regrets. But alas all is not so rosy. Sensing a saving to be made, some distributors do not hesitate to import utensils manufactured from plastic that are not always compliant with food standards. Europe is on its guard and customs seizures are numerous. How can you be sure of your purchase? By checking whether the CE logo is present and by avoiding particularly cheap utensils. Yes, food safety has a cost because a plastic suitable for food is a plastic whose components are strictly regulated and whose potential migration into food presents no risk to the consumer.

That said, we do not mean to be alarmist with regard to this issue. Plastics have a phenomenal range of advantages. As always, they have helped to reduce manufacturing costs and enabled very large scale production. This is especially true for utensils, for making your favourite meals. They are ever more numerous in our drawers and serve to decorate our best-laid tables: juicers, containers of all kinds, measuring cups, corkscrews, egg cups...again, designers apply themselves to stimulate other senses, than those developed by our taste buds. 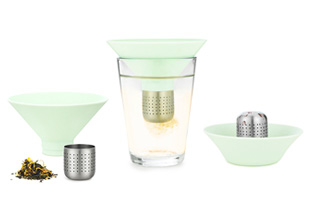 Silicone was much more than a simple fad and it has revolutionised the way we cook. From a timid appearance in the 1970s as rigid and soft spatulas, it has recently conquered our kitchens in the most spectacular way. Thanks to it, and more particularly to its flexibility, demoulding cakes has never been easier. As for kids, they love it! Since it can be moulded into any shape, that good old stand-by, the round chocolate cake, can now look like a giant teddy bear, a dinosaur, an animal's footprint, or a gentle giant.

When the first moulds appeared on the market, silicone was unfortunately not within the reach of every budget. Prices have fallen considerably in just a few years. There is unfortunately no miracle linked to possible economies of scale...Certain manufacturers, taking advantage of the trend, offer products manufactured from lower quality silicone, which is more fragile and which can let heavy metals migrate into the food during the cooking process. How can you recognise silicone which is truly designed for cooking? Above all, you should know that food-grade silicone is a mixture of silicone polymers and a catalyst (platinum or peroxide). Although platinum silicone remains inert until 250-300°, the "peroxidised" variety lets particles migrate into food from 160°. It must be noted that only Germany and Switzerland have banned the use of peroxidised silicone in the manufacture of food moulds.

For improved food security, it is better to buy utensils which are clearly labelled as "platinum silicone" or those labelled as being suitable for high temperatures around 250°.

Even traditional ovens are getting into it !

You're not imagining things! A young team of Brazilian designers has successfully completed the feat of developing a traditional oven designed entirely from plastic materials. Of course, it isn't a microwave oven with a vague grill function attached... Their achievement is based on Vectra®, a polymer which is resistant to higher temperatures developed by the American company Celanese. Thanks to the integral moulding of the cooking chamber, this new kind of oven has significantly thinner walls, meaning that it takes up much less space. And that's not all: the polymer's ability to keep heat is such that it requires almost half as less energy than steel to reach temperatures of about 200°. Introduced at the Kunststoff plastics trade fair in Düsseldorf, the new oven was one of the main attractions of the event. We can't wait for it to start being mass-produced! 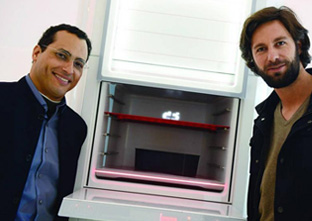 Read the part 2 Plastics ensure the cold chain remains unbroken
The feature's sections
Share this article
Subscribe to our newsletter
Register
See similar articles
Read the previous article Let there be music, with plastics!
Read the next article The transparent truth about plastics