Snug as a bug

Dogs, cats, and the hen with the golden eggs

Europeans love animals, and they love their pets even more! The French and the British have the most pets. The figures for France are actually quite high, given that there are almost as many pets as there are citizens in the country. The Spanish and the Portuguese are not far behind, as are the Romanians, the Danes and the Hungarians. Surprisingly, dogs and cats do not have the lion's share, even though there are an estimated 100 million of them in Europe, and the top of the list is occupied by fish! It makes sense, since aquariums are rarely inhabited by a single occupant. 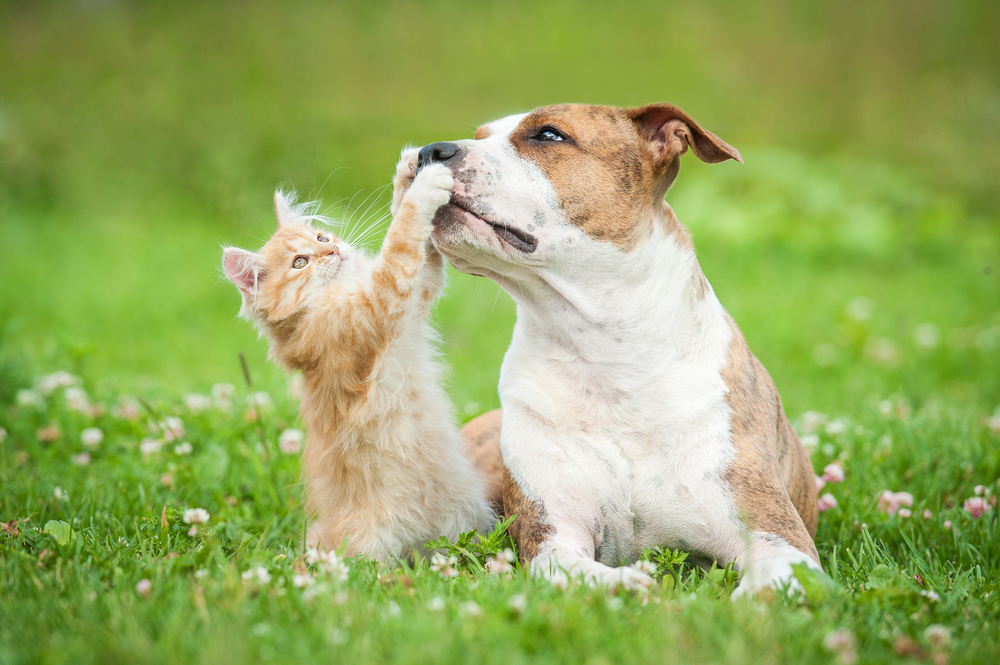 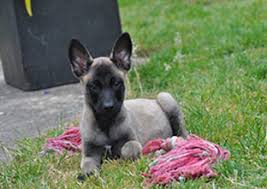 These figures clearly explain why pets have become big business. The industry continues to grow; it is currently worth over 20 billion Euros and employs over 100,000 people in Europe.

Happy as a fish in water 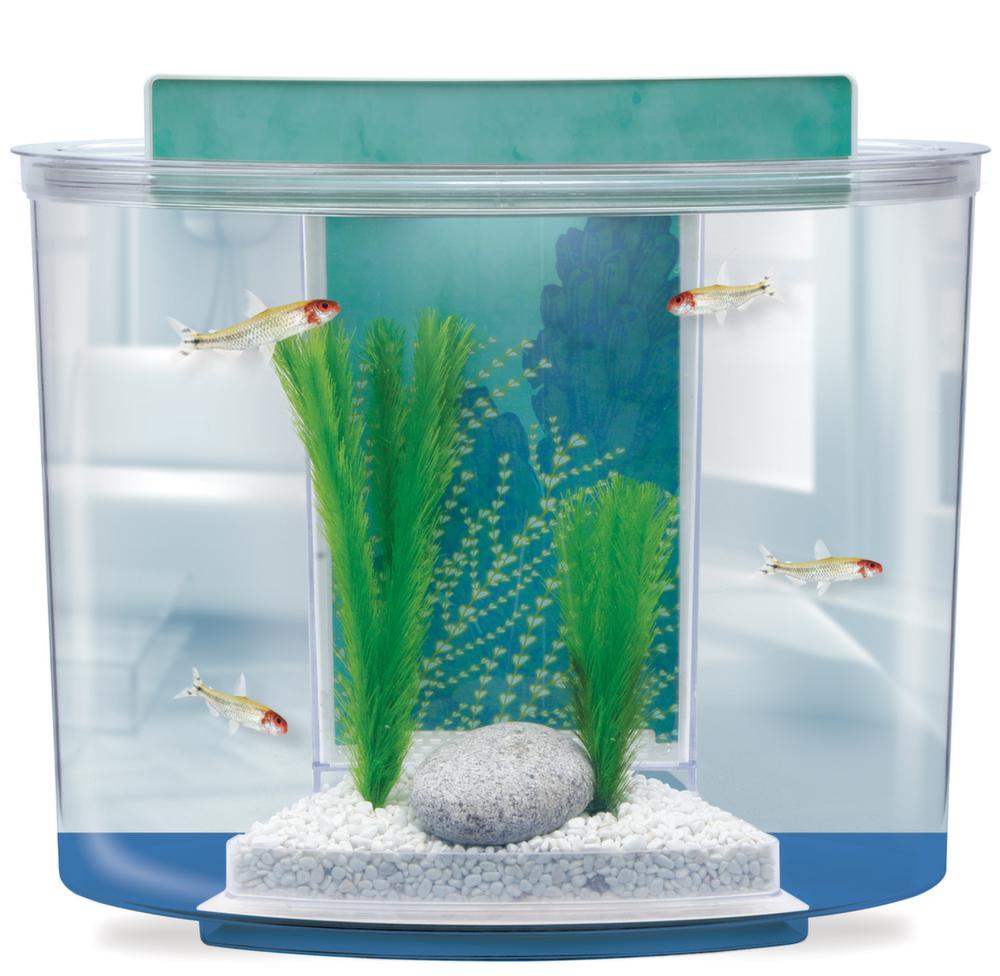 As fish are the unrivalled kings, it seems appropriate to delve into the world of aquariums. For amateurs, the main concern is recreating an aquatic environment as accurately as possible. It is a world populated by enthusiasts seeking that extra touch that will improve their "work of art". As always, however, you need to learn to crawl before you can walk. In order to encourage young children and their parents, aquarium manufacturers started developing a wide range of affordable and ready-to-use aquariums for freshwater fish. The kits comprise a tank made from polycarbonate, a solid, transparent and inert material, and small PVC or polystyrene decorative objects. This type of aquarium is usually small because, as strong as it may be, unlike PMMA and glass, polycarbonate cannot withstand the pressure of the water on the panes if the tank contains a large volume (over 15 litres).

The "discovery kits" are mainly intended for children, and are ideal for three or four goldfish. Finally, all of the tanks are parallelepipeds. Spheres are no longer used, and even banned in some countries, because the lack of corners prevents the fish from resting. Fish enjoy hugging corners to rest or simply to hide. 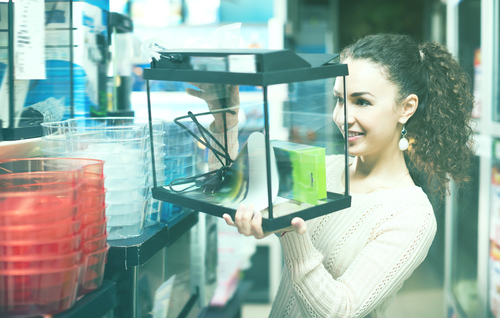 If your interest is more than a passing one, it is time to delve further into the world of aquariums by purchasing a larger tank. Top aquarists particularly enjoy personalising their aquariums and usually build, themselves, so they fit in with their future surroundings. Traditional glass aquariums are increasingly being replaced with ones made from PMMA (polymethyl methacrylate), and not necessarily for reasons linked to price or lightness. In fact, acrylic glass is not necessarily much cheaper than mineral glass and is not necessarily lighter depending on the thickness. Why, then, is it so successful? Simply because the polymer allows more light through its surface than glass does, it acts as a natural barrier to UV rays, it doesn't turn yellow, and it is unbreakable. And it is inert, of course. It is not chance that made it the most used material in large-scale aquariums intended to be visited by the public. In fact, the world's largest pane can be found in an aquarium in California and measures 3m x 5 m, and is 33 cm thick. 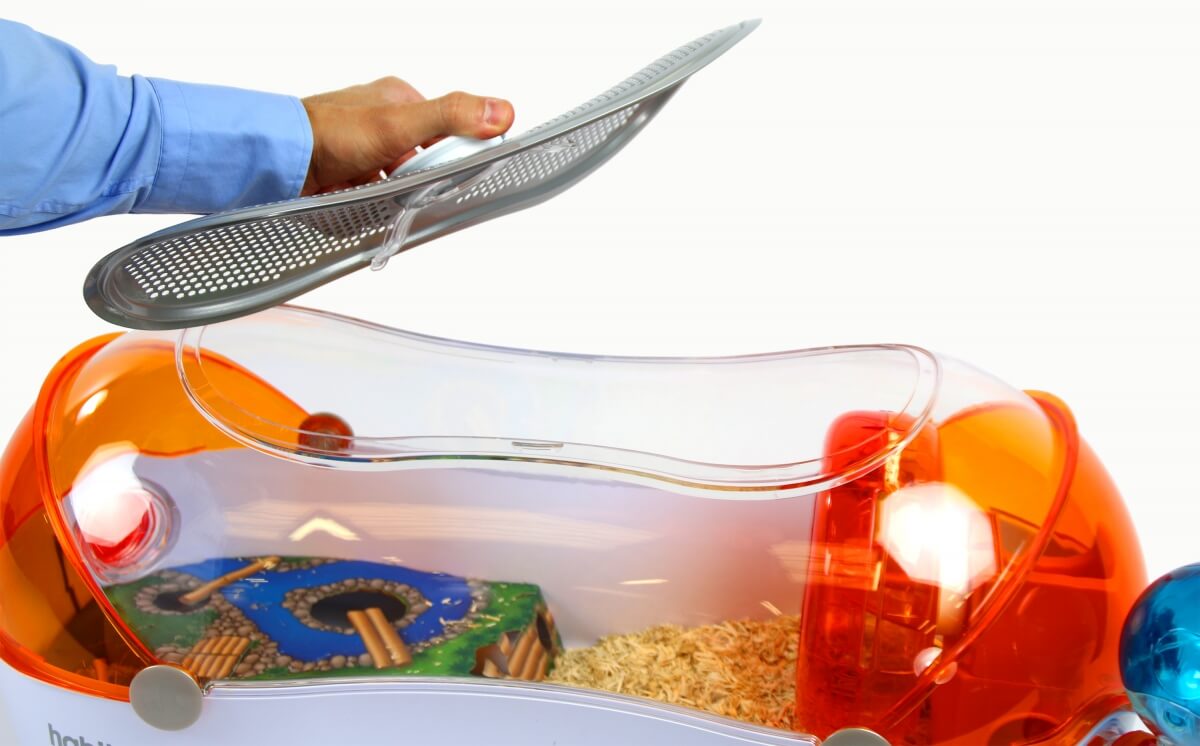 Tortoises, snakes, reptiles of all shapes and sizes, small rodents and even spiders have long been considered real pets. They are officially part of a family called "exotic pets". As is the case for fish, their owners are enthusiasts but also children, generally living in an apartment. The hamster eternally running in his little wheel is a thing of the past. Rodents are now often given the run of a palatial environment made from transparent polycarbonate that allows them to be observed without disturbing them. This durable and light polymer is easy to mould, and can therefore take on the wildest shapes. As a result, the little critters no longer cower at the back of their cages, quite the contrary in fact. The most sophisticated models have several floors connected by ladders or slides. Even better, some cages are modular.

New sections can be added to the "main house". There is also an avalanche of decorative objects, particularly those intended for terrariums, such as fake eggs, fake branches and fake rocks. A real catalogue of polymers. One of the great strengths of plastics is that they can take on almost any shape, can easily be painted, and are relatively cheap.

A dog's life. But really?

Imagination has no limits and plastics are king in the area of toys for dog! However, it is a little known fact that such toys have an actual use, as has been demonstrated by many ethologists specialising in animal behaviour. Young puppies have an uncontrollable urge to chew, and nothing is more normal! They nibble to catch their food, to explore their environment, to chase away boredom and relieve stress. However, this habit can quickly become a problem when the dog starts nibbling on your belongings. Animal shops sell all sorts of objects intended to meet their chewing needs, in order to solve this problem. Such toys are often made from silicone and are absolutely safe for animals. Some of them are even hollow so they can be filled with a treat or two. 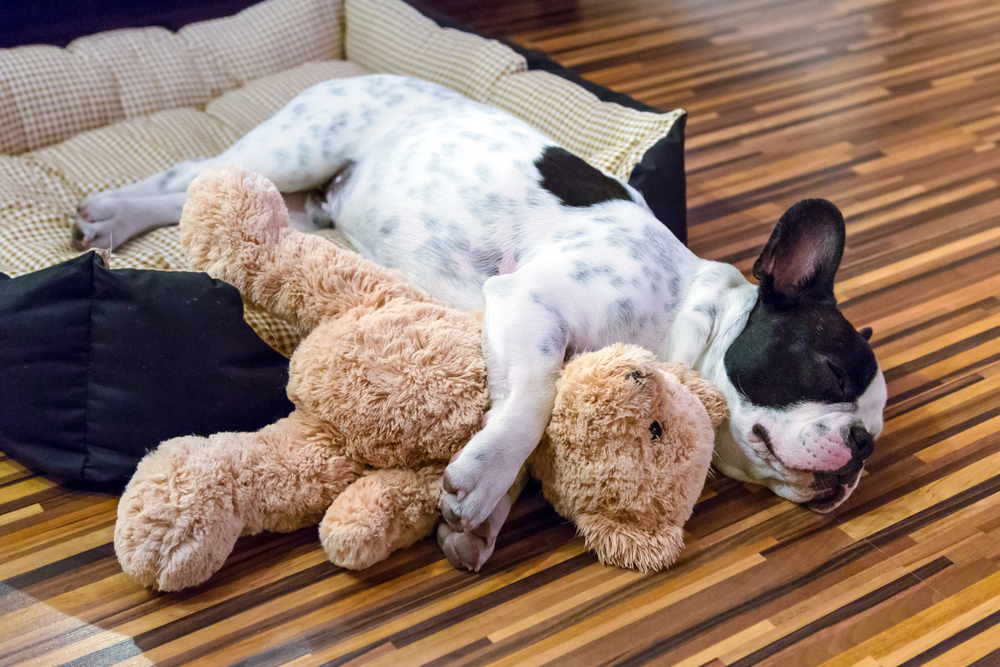 A very young adopted puppy, recently separated from his mother and siblings, will often seek out a reassuring presence with which to sleep at night. For good reason since the puppy would snuggle up to its mother and siblings to sleep before it was adopted. It follows, then, that there are cuddly toys for dogs. Like those used by humans, they are generally made from polyester. The major difference lies in the stitching which uses an ultra-resistant nylon thread. The toys only contain a small quantity of polyester padding in order to avoid arousing the dog's curiosity as to the toy's contents. Some of the toys contain small rattlers designed to reassure the animal.

So what about cats? There are fewer toys for cats available on the market. Cats are more autonomous and independent, and are generally self-sufficient. Toys are not essential, particularly if they are free to go wherever they please.

Other fish to fry

Cats come, and cats go...and, as they usually consider their owners to be their slaves, they find it hard to understand that their owners are not always waiting behind the door to let them in. This is why cat flaps were invented. However, they have the major disadvantage of letting in any old brazen feline. Special cat flaps have recently been developed using a sensor to open and close the flap when it detects the RFID chip inserted in the cat's collar. And because functional does not have to be ugly, they often, very attractively and harmoniously, blend various polymers such as polycarbonate and polyethylene. Their silicone seals provide perfect insulation against the cold and noise. Finally, staying with connected objects intended for cats, a French start-up designed the Catspad, a programmable kibble and water dispenser that can be activated using a mobile application and a chip inserted in the cat's collar or implanted under the skin. 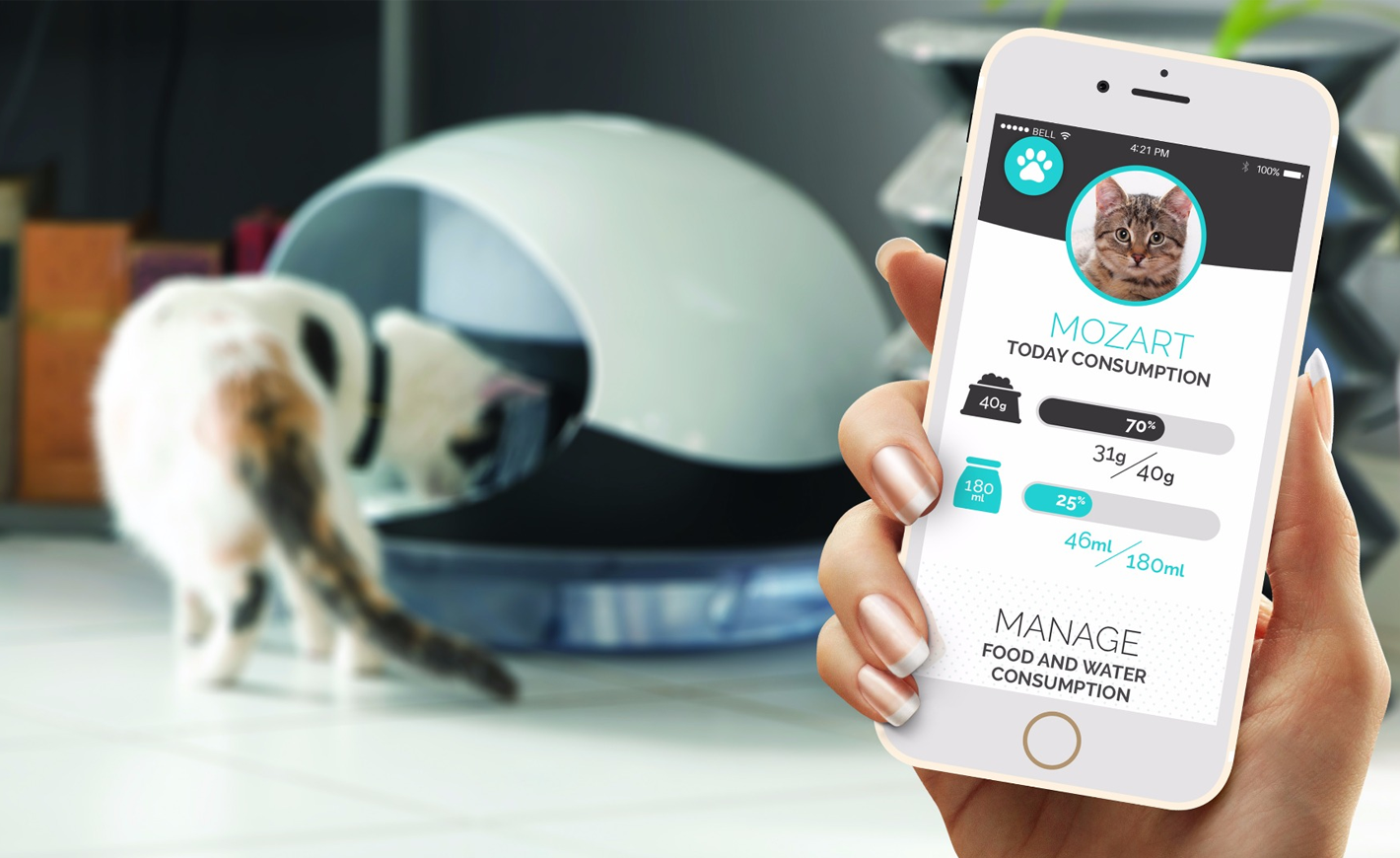 In addition to being intelligent, the Catspad is also elegantly designed as only polymers could allow it to be. The device was very well received at the last CES in Las Vegas. 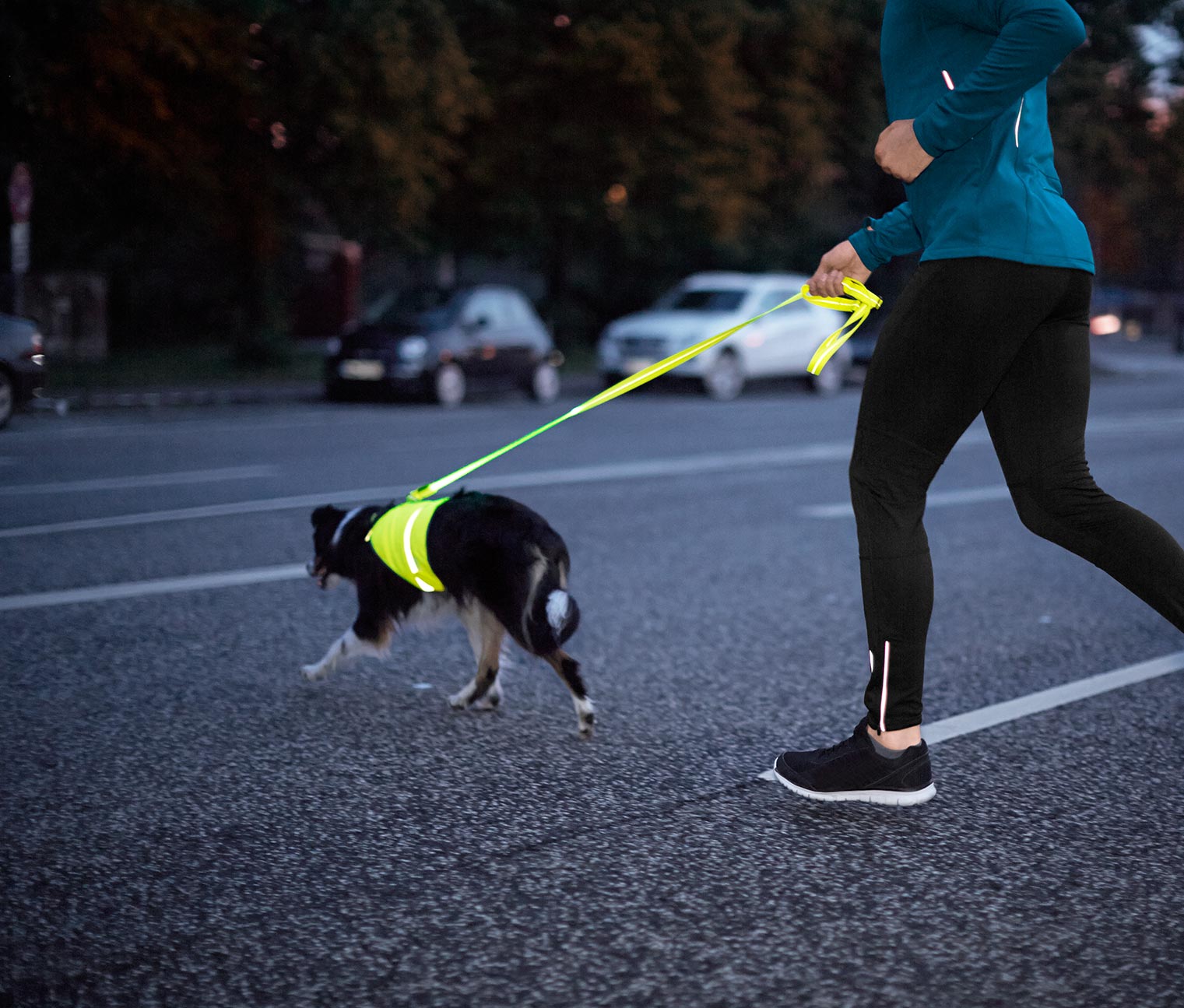 Imagination sometimes has no limits when it comes to our dear pets. Some luxury ready-to-wear brands create animal clothing made from the same fabrics as those worn by their owners so that they can wear matching outfits. And there are ranges of multi-coloured raincoats for dogs that are perfectly useless if not to avoid that horrendous wet-dog smell. Animal product manufacturers' catalogues are filled with all sorts of more or less original products, and they are not always in the best taste. However, some of them are sometimes unexpectedly useful such as the personal protective equipment (PPE) for dogs. Like the human versions, they are reflective polyester jackets for dogs that ensure that they can be seen at night. There is a reason they found success among joggers who make the most of their run by walking the dog at the same time. There are also lifejackets for dogs who are not particularly comfortable floating in water with their paws off the ground.