Plastics take animals under their wing

Plastics in the service of animal care

Plastics are widely used to protect and care for animals. Some inventions are not always indispensable, but they can sometimes be amusing or even poetic. Others are more serious and can save lives. This is the case of certain types of prostheses which have been appearing around the world. In most cases, they are the work of animal rights defenders and the formidable technology of 3D printers. 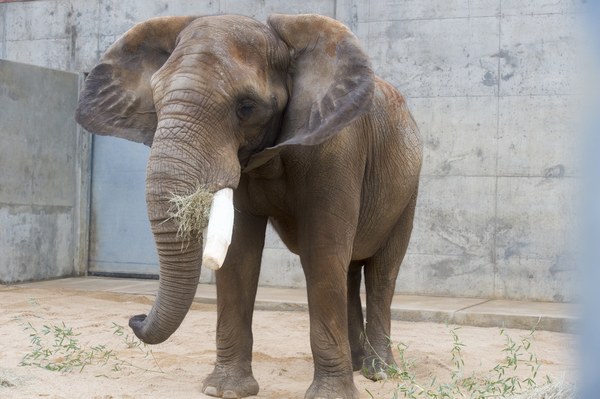 Elephant tusks are made of ivory, an extremely solid material. However, they can sometimes split and eventually break, seriously impeding the pachyderm's ability to fend for itself. Particularly in nature, where the giant incisor is used as a means of defence and as a tool to rip the bark off trees, some of which is eaten. When he arrived at Birmingham Zoo in the United Kingdom, Bulwagi, an African elephant, already had a cracked tusk. The crack grew in the space of a few years. His caretakers used to place a brass ring around the tusk that always ended up deeply embedded in the ivory, leading to a risk of severe infection for the animal. The zoo's caretakers then decided to approach the local university in order to come up with a more satisfactory solution. After analysing the forces involved, they decided to attach a carbon fibre splint; carbon fibre was used because of its high tensile strength.

fibre was used because of its high tensile strength.

To make it unbreakable, the splint was then wrapped in glass fibres coated with a polyurethane resin. The result more than met expectations, and Bulwagi soon adjusted to this new and slightly bulkier tusk.

A high-tech shell for Freddy 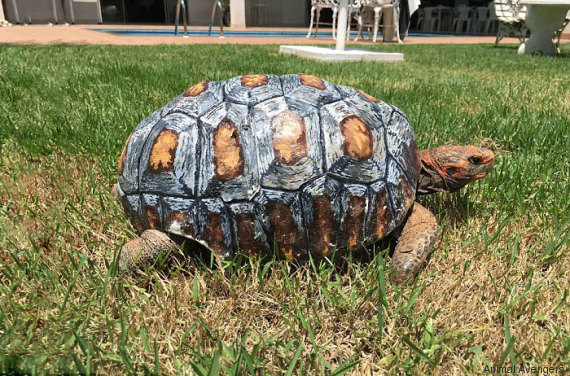 Freddy, the tortoise, survived a fire in Brazil, but he did not escape unharmed. The fire burned over three quarters of his shell, greatly reducing his chances of survival. However, the "Animal Avengers" came to the rescue. This group of veterinarians based in Sao-Paulo specialising in rescuing animals in great difficulty decided to rebuild Freddy's shell. A daunting task indeed. To ensure that all angles were covered, the team recruited a 3D designer and a dental surgeon, with a 3D printer that was used to make dentures. The team first took hundreds of photographs of the tortoise in order to better understand how the shell's structure. They then created 3D models of the various parts of the shell. The aim was to assemble the shell without causing Freddy any pain, and making it flexible enough to ensure that it did not impede his movement.

The shell was then printed piece by piece in ABS, a resistant plastic that is flexible enough to provide a certain degree of elasticity. The result was breathtaking! It was a total success. Proud of their accomplishment, the team even painted the polymer shell in Freddy's original colours.

3D printers have been pulling their weight in recent years. The revolution is going full steam, and no industry has resisted its siren call. 3D printers can make anything, as long as the object can be modelled on a computer. There are many examples of animals having been saved by 3D printing technology, like Beauty, a bald eagle who sustained a head injury inflicted by a poacher. When it was rescued by an American raptor enthusiast, the eagle was dying, disfigured and completely unable to use the remains of its beak to feed itself. With the help of the Kinetic Engineering Group and after 200 hours of hard work, a custom-fitted beak prosthesis was made giving the bird a new lease of life. Once again, ABS was chosen for its qualities.

3D printing technology is increasingly used to manufacture prostheses for injured animals; after Beauty's beak and Freddy's shell, Bagpipes the penguin was able to walk again thanks to a 3D-printed foot designed using a 3D scan of the animal's able foot.

Mix and match with plastics

Prostheses are not always made using 3D printers. Some companies sell prostheses for pets such as cats and dogs that are not too different from those designed for humans. They are manufactured using various polymers: first of all, thermoformable polymers such as ABS for their rigidity and lightness. Elastomers are also used to make the sleeves because of their smooth texture and elasticity. Finally, the more sophisticated models use a small carbon blade made from a fibre coated in a polymer resin to provide flexibility to a replacement paw.

And finally, because they always inspire us, comes the story of Fuji, a dolphin living in a Japanese aquarium who had to have 75% of his caudal fin (tail) amputated because of a necrotic disease. One of the aquarium's veterinarians asked Bridgestone, Japan's largest tire manufacturer, to fund and design a prosthesis. It was designed with the same polymers as those used in Formula 1 tires. The exact polymers used are a secret due to their strategic value. The fin weighs two kilos, it is 48cm long and is bolted to the dolphin's body. It took two years and a dozen prototypes to design an artificial fin that was sufficiently resistant to withstand the pressure of the water during jumps, and fitted to a dolphin measuring 2.71 metres in length and weighing 227 kilos. 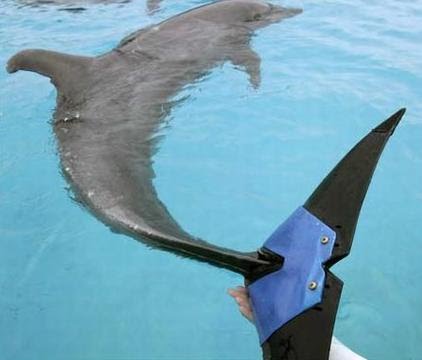