Engineered plastics possess singular chemical properties that enable polymers to integrate, in a special way, with living tissue. Their many benefits for medical use over other materials like minerals, metals, etc., include biocompatibility, better asepsis and establishing barriers against bacterial

Plastics get under your skin

The recent scandal of PIP (Poly Implant Prothèse) breast implants should not overshadow the advances made by plastics in implantable medical devices. The many applications of these, both as endoprostheses and implants, are vital to the health and comfort of many patients. The main thing is that they must be biocompatible. And many polymers have precisely that key quality.
Biocompatibility means that the material does not cause inflammation and is neither toxic nor carcinogenic in its interaction with the human body. The regulations also refer to bio-inert materials, i.e., that do their job without causing an adverse reaction with living tissue.
The joint section of a biocompatible prosthesis, for example, must allow movement without undue friction and produce minimum wear debris.

Getting an eyeful of plastic

The search for alternatives to eyeglasses led ophthalmologists (eye-doctors)to plastics. The earliest glass contact lenses developed at the turn of the century, called scleral lenses because they were placed on the sclera or "whites" of the eye, were replaced by polymethylmethacrylate (PMMA) lenses in the 1930s. Improvements made to this polymer since the 1950s, followed by the recent introduction of silicone, have brought the smaller, so-called, corneal lenses into general use. These can be soft or rigid, and are now also oxygen permeable and better tolerated. 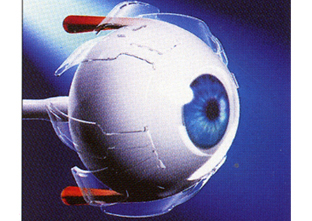 At the same time, plastics have been behind progress not only in vision correction, but also, in cataract surgery. The clouded lens resulting from this aging-related, inherited or ocular trauma-related condition is replaced by an implanted polymer-based lens in PMMA, silicone or soft hydrophobic acrylic resin. Very widespread in developed countries, this technique is being promoted in many humanitarian campaigns in developing countries where cataracts are the leading cause of blindness.

Terminator won't be back ! 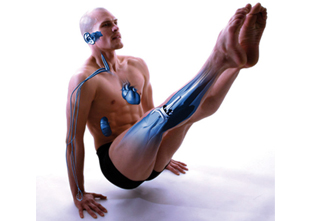 Plastics possess qualities that assure them of a bright future in implantable medical devices.
With PEEK (polyetheretherketone) prostheses, the days of cyborgs setting airport gate alarms ringing are a thing of the past!

Highly resistant with near-bone elasticity, this carbon-based polymer composite is currently ousting titanium as the biocompatible material of choice: being radio-wave transparent, the implants are easier to monitor by medical imaging. That property also makes it an ideal material for pacemakers which can then be remotely controlled and recharged. The new bionic man is plastic!

Getting on top of hospital-acquired infections

Fearful of leaving hospital more ill than when you went in? Take comfort in the fact that plastics are at the forefront of the fight against hospital-acquired infections that are the scourge of health facilities.

A nosocomial infection can prolong a hospital stay by up to four or five days on average, and may even prove to be fatal, which makes the use of polymers a major public health breakthrough.

The increasingly widespread use of disposable instruments has obviously solved medical equipment decontamination problems...and so reduced the risk of bacterial or viral infections. 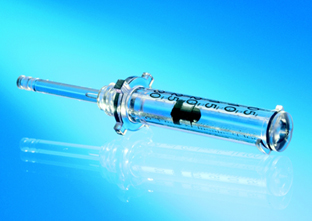 France’s National Health Authority, for example, recommends that polyurethane or fluoropolymer catheters be used to limit the risk of injection by non-intravenous drugs that may cause irreversible lesions.

Polymers can be formidable allies in the fight against bacterial infections. Recently, a group of British researchers developed a system for detecting bacteria using polymers which emit a fluorescent light and change shape when they encounter bacteria.

Some laboratory tests currently take several days because of the complex diagnostic methods used. These new invasion tracers will soon enable medical teams to detect the early stages of a bacterial infection much more quickly.

PMMA (polymethylmethacrylate), better known as acrylic resin, has been used in dentistry for making dentures since the 1930s.
Implants are now the preferred method for replacing lost teeth. The technique of inserting an implant made of titanium alloy into the jawbone to which the artificial tooth is attached has benefited from advances in materials science and surgical techniques. However, there are limits to the biocompatibility of metallic implants even with the ones made of the more recent zirconia ceramic. In some cases, these implants have been found to cause stress at the interface with the jawbone and degrade in contact with the oral environment. Possessing mechanical properties more like bone tissue and proven biocompatibility in neurosurgery and orthopaedics applications, PEEK (polyetheretherketone) is now emerging as a serious option for manufacturing and implanting prostheses that will be long in the tooth! 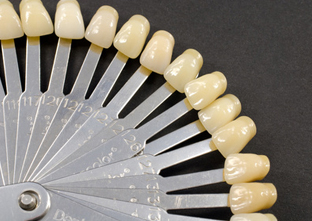