A formidable power of attraction

Digital printing has expanded the possibilities for creating displays in event spaces thanks to new types of print media. Now accessible to even the most modest budgets, printed polyester or PVC fabrics can now be found in all types of events in the form of kakemono hanging scrolls and umbrella stands.
Some of these textiles are endowed with new functionalities thanks to the addition of nano-particles during the coating process, as is the case for the photoluminescent PVC Frontlit tarpaulin whose non-printed parts accumulate light during the day and restore it at night.

The Belgian Polycasa company has developed a semi-rigid polyethylene terephthalate (PET-G) plate designed for lenticular printing. The technique consists of simultaneously printing two images cut into very thin strips in order to display the one or the other depending on the angle from which it is viewed. Once it has been laminated onto the panels, it can display an image morphing into another, or even moving images.

Just as impressive is the development of decorative polymer films used to customise exhibition spaces. Whether adhesive or repositionable, they enable lettering, markings and colours to be added to plastic panels. Some films intended for use with transparent surfaces perfectly reproduce the appearance of frosted glass. Some microperforated films enable the design to be visible on one side, while preserving the transparency of the other side.
One of the specialists in this field, the American MACtac company, recently launched OLFactive, an acrylic and polyurethane-based anti-odour film used to laminate digital printing media and panels. This ingenious solution can be used to enhance booths in close proximity to food service areas which are often less well-rated despite having high attendance numbers.

Velcro or no show

Burdock and its hook-shaped flowers remained little more than a botanical curiosity for the longest time. That is, until that fateful day in 1942 when Swiss engineer Georges de Mestral, upon returning from a walk and laboriously cleaning his dog's coat, decided to reproduce the phenomenon. Nine years later, he marketed the first repositionable adhesive strips before filing a patent for a system of plastic hook and loop fasteners under the name of Velcro in 1955.
This fastening system is used in myriad activities throughout the world. First among these is the event planning industry in which professionals use it immoderately when transporting, assembling and dismantling installations. 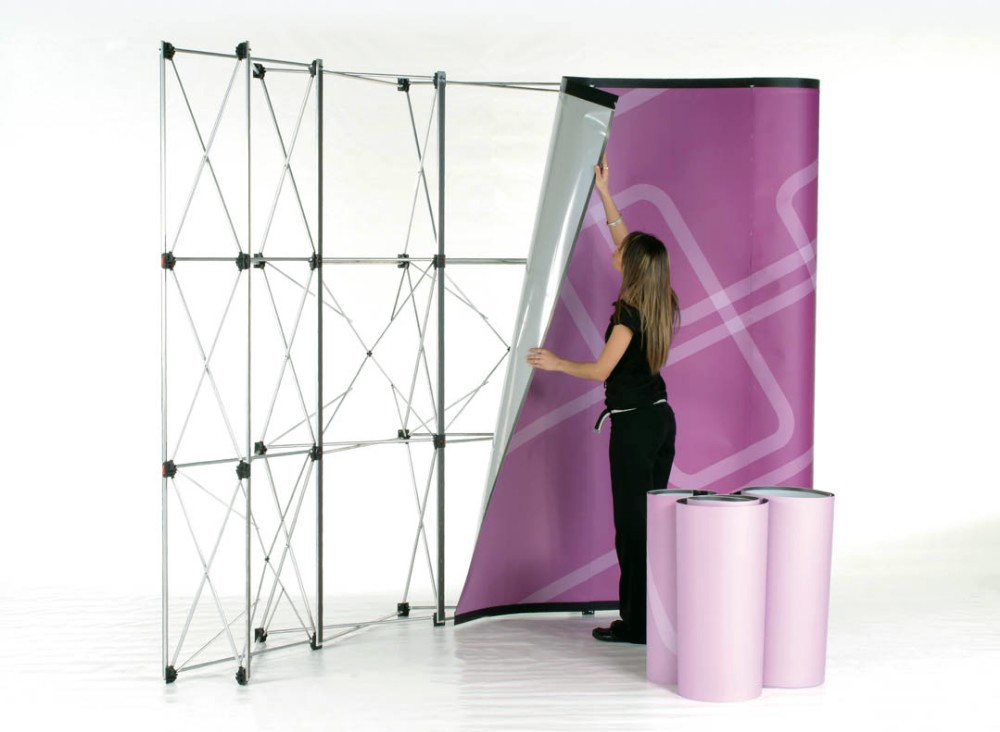 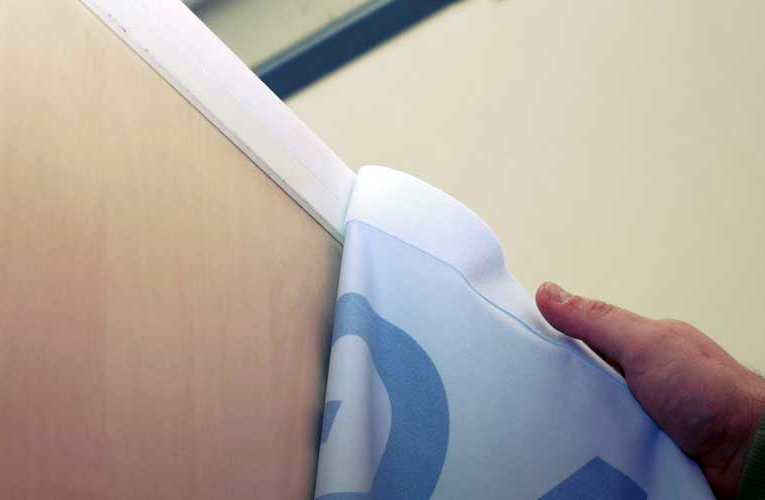 Whether it is used for an exhibition in a trade fair, a theatre stage or a display, Velcro is to assembly operations what the Swiss army knife is to dismantling.
The most robust nylon fasteners are also the most commonly used. Polyester fasteners, which are more resistant to stretching and to UV rays, are a good alternative, particularly for outdoor use. Polypropylene fasteners are particularly suited to wet environments.

For reasons linked to performance, exhibitors used to favour high-boy tables and graceful bar stools above all others to create efficient yet spartan reception areas, up until a few years ago at least. This style of space management has run its course. In order to fight the desire for ubiquity of hyper-connected visitors, the trend has moved towards cocooning which, through the use of plastics, seems to be returning to the soft and cool comfort of Pop culture
The presence of SLIDE's furniture in booths testifies to the vitality of Italian design in this area. The company's roto-moulded polyethylene seats, tables and ottomans, among others, have resurrected the smooth and supple lines of the Seventies. Favouring a "lounge" atmosphere, including trade fairs, the Milanese manufacturer also sells a line of luminous furniture, popularised, in the event planning industry in particular, by a cone-shaped table crowned by a circular table-top.

As an answer to Italian sophistication comes a school of casual design that revisits the classics of Pop culture with a hipster-ish slant. The Belgian SIT ON IT start-up created by Belgian designer Koen Deloose with updated Ottomans and other cushion seats filled with polystyrene microbeads offering a less formal style.
Present in this niche, with its collection of more structured "bead" seats, French manufacturer Unconventionnal is banking on the return of inflatables to mark an event. The company offers a collection, comprising seven chairs made with two types of customisable membranes. The entry-level series made from thermoplastic polyurethane (TPU) is available in a luminous version fitted with LED lights and a remote-controlled 10-colour, colour management system. The other series, offering a cosier touch, is made from a waterproof polyester fabric.

Origami furniture made in Holland

The best alternative to inflatable furniture is undoubtedly folding furniture as regards lightness and clutter. With this in mind, the Dutch designer duo of Douwe Jacobs and Tom Schouten developed its Flux range of furniture which has been adopted by many event organisers.
Taking their inspiration from packaging techniques, they designed a full range of essential equipment for trade fair booths and conferences: chairs, ottomans, high tables and coffee tables, lecterns, counters and information desks. Each item is flat-packed and can be quickly assembled and dismantled by following the preformed folding lines. Made from polypropylene, a material that is more flexible and durable than ordinary cardboard, these items of furniture can be reused and easily recycled at the end of their lifecycle. 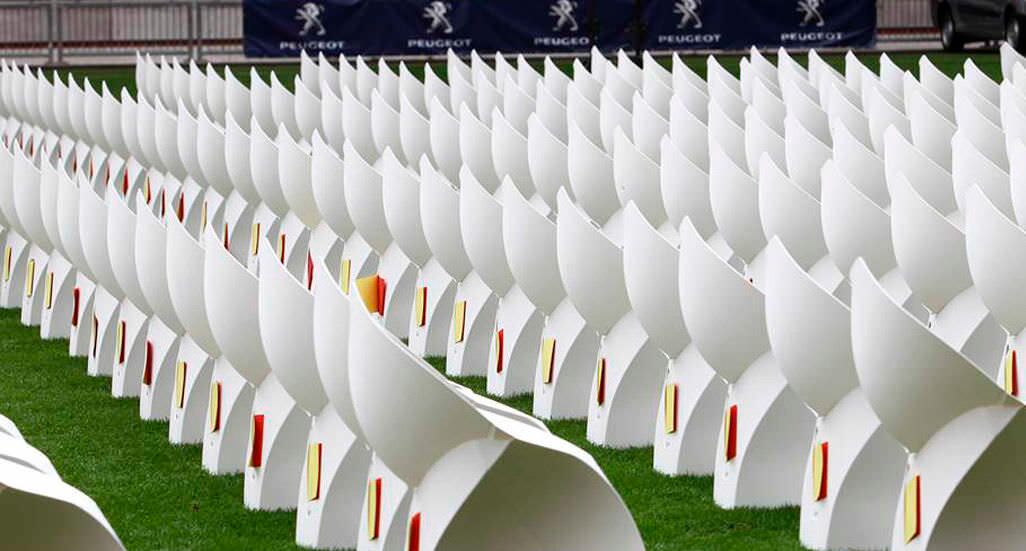 The brand's flagship item, the Flux armchair, sells for around one hundred Euros, weighs only five kg and can bear up to 160 kg. Particularly appreciated for the level of comfort it provides, its highly enveloping shape and its elegant tulip shape, it can easily fit in with the atmosphere created for commercial or cultural events.