The name is Solar Impulse. Semi-god born from the sun and a bird, it is primarily a symbol of the energy savings that can be accomplished using new technologies.

You need some cheek to want to circumnavigate the world in an airplane without fuel!

Besides, Solar Impulse will not burn its wings, it is an ally of the sun and befriends the earth, leaving its reserves of fossil fuels untouched and avoiding any kind of pollution. 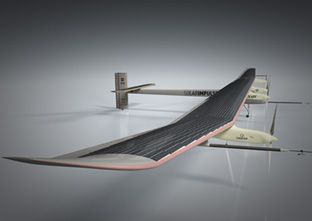 Or rather, It flies. Nonetheless, it will. Day and night.

Night flying an airplane powered only by solar energy?

A seemingly unattainable goal, except for a bunch of visionaries, who do not mind pushing the boundaries of all the technologies already considered cutting edge.
That's exactly the agenda of this revolutionary concept: materials, energy management, man-machine interface - everything will be redesigned, enhanced, multiplied.

Attaining a just 1,600 kg take-off weight  with a 63.40 m wingspan and the necessary rigidity, lightness and flight controllability is a challenge that has never before been met in aeronautics: never has such a large craft been built which weighs so little.

With the wingspan of an Airbus A340, in order to minimize induced drag and offer the largest possible surface for the solar cells; the weight of a family car; every unnecessary gram having been eliminated in order to build a super-light aircraft; and with the power of a scooter after extreme optimization of the entire energy chain, Solar Impulse is, above all, a vision!

Behind Solar Impulse, a team

Even if the project looks like a dream, it has been planned and undertaken with the utmost and down-to-earth rigour.

The feasibility study was done in 2003 at the Ecole Polytechnique Fédérale de Lausanne (one of the best engineering schools in the world).

Its conclusions encouraged the 50-person team, helped by a hundred experts around the world and led by Bertrand Piccard and André Borschberg, to develop the concept over three years.
Design and manufacture of the prototype HB-SIA took them another three years (2007-2009).

Today, the prototype is ready in its workshop and test flights (including its first night flight) with the prototype are scheduled for next year.

If everything works well, the plane itself, HB-SIB by name, will be built in 2011 and will perform trips lasting several days, crossing the Atlantic and touring around the world in five stages from 2012 onwards.

Since 2005, flights in real weather conditions have been carried out in Brussels and Geneva. These virtual flights enable the evaluation of the aircraft's energy resources to fly through a whole night, and come back into the sun each morning in order to continue its mission. To be able to do this generally means following a tortuous flight path to avoid cloudy zones on the trajectory.
It will gain altitude during the day and descend during night, thereby saving a significant amount of energy in its batteries.

The HB-SIA prototype has a non-pressurised cabin for the technologies validation step. At first, the pilots will examine its flight characteristics, first by day and then, by night. Never before has an aircraft of this type succeeded in making a night flight with a pilot on board, and this mission of 36 hours will represent an historic first! 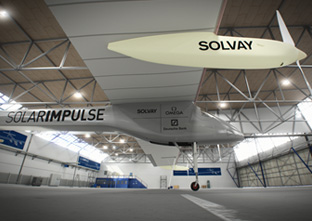 In 2011, the second Solar Impulse airplane will be equipped with a pressurised cabin to enable non-stop, long-haul missions, continental crossings and that of the Atlantic Ocean.

In 2012, a round-the-world expedition will fly over land close to the equator, but essentially in the northern hemisphere.
Five stopovers are planned to change pilots and present the adventure to the public and also political and scientific authorities. Each flight leg will last as long as a single pilot can endure: from 3 to 4 days.

Once the efficiency of the batteries allows the reduction of their weight, the airplane could seat two pilots for very long flights and a non-stop, round-the-world flight could be envisaged at that stage.

The success of the whole project is related to energy.

At midday, each m² of land surface receives the equivalent of 1,000 watts, or 1.3 horsepower of light energy.

With 200m² of photovoltaic cells and 12% total efficiency of the propulsion chain, the aircraft‘s engines achieve on average just 8 HP or 6 KW – roughly the amount of power the Wright brothers had available to them in 1903 when they made their first powered flight.

And it is with this energy, optimized from the solar panel to the propeller by high performance plastics, that Solar Impulse is striving to fly day and night without fuel!

The 12,000 monocrystalline silicon cells, each 150 microns thick, have been selected for their lightness, flexibility and efficiency.
At 22%, their energy efficiency could have been higher, but the additional weight would have penalized the aircraft during night flight.
In this, the most critical stage, the major constraint of the project is storing energy in the lithium polymer batteries.

At the present stage, the maximum energy density is 220 Wh/kg. The accumulators needed for night flight weigh 400 kg, equal to ¼ of the total weight of the aircraft. Success is therefore possible only by maximizing aerodynamic performance and optimizing the energy chain.

The battery capacity will then allow a 2nd pilot on board, decrease the plane’s wingspread or increase its flight speed. 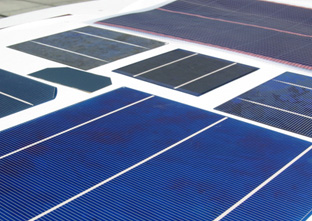 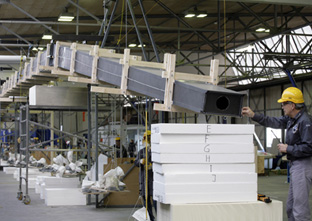 61 m of wingspan for a 1600 kg bird, is not only a challenge, it was an unheard of achievement because of the constraints of rigidity, lightness and control in flight.

Solar Impulse is built around a carbon fibre-honeycomb composite using a sandwich structure.

The upper wing surface is covered with a skin of encapsulated solar cells, and the undersides of the wings with a high-resistance flexible film.

120 carbon fibre ribs placed at 50 cm intervals profile these two layers and give the body its aerodynamic shape.

Beneath the wings are four gondolas, each containing a 10 HP motor, a lithium polymer battery set and a management system controlling charge/discharge and temperature.

The plastic thermal insulation has been designed to conserve heat radiated by the batteries and to keep them functioning despite the - 40°C encountered at 8,500 metres.

Each engine is fitted with a reducer that limits the rotation of each 3.5 metre diameter, twin-blade propeller to within 200 - 4,000 rpm.

High performance comes from plastics and plastics come from Solvay

Solvay, the international chemical and pharmaceutical group, contributed extensively to the project: in know how and solutions, among others: in the development of solutions based on ultra-light and ultra-performing polymers to replace heavier metals and in the performance of non-linear numerical stress simulations of the resistance of the ultra-high performance polymer assemblies.

In total 12 Solvay polymers and products and 6,000 parts made of Solvay ultra-light polymers are used in the Solar Impulse in various applications and devices such as parts in the throttle box, monitor control unit, battery fixations and bushings-bearings.

Other applications and solutions include balls, bolts and screws, washers, shafts, hinges, spacers and other mechanical pieces of all shapes and sizes. Polyamide-imide Torlon®, polyetheretherketone Primospire® and self reinforced polyphenylene Primospire® are the most used ultra-polymers for these applications.

The PFPE-based lubricant with a very wide operating temperature range, will allow the airplane to fly in extremely cold or hot conditions as will the cockpit and motor gondolas, made of special polyurethane foam prepared with a Solvay foaming agent.

Solvay’s polymers and chemicals also increase energy saving and energy efficiency as components in Lithium-batteries to increase their energy density and as an ultra resistant protection film for the photovoltaic cells. 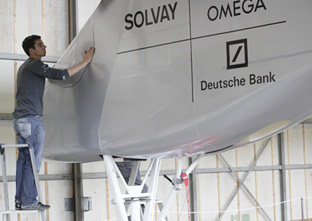 The zero oil plane in a nutshell