The rapid development of so-called intelligent or technical textiles constitutes a revolution both for the textile industry itself and for sectors ranging from transport, construction and workplace safety to agriculture, health, consumer electronics and, yes, even fashion.

Also known as smart fabrics, these materials generally consist of polymerbased fabrics designed to perform very sophisticated functions and usually incorporating high-tech elements, from biochemicals to photovoltaic cells, into the fabric itself.

The world's consumption of intelligent textiles has grown from 65 billion to 85 billion euros in just ten years, and is expected to reach 100 billion euros by 2010.


Europe is the No. 1 consumer of these wonder-fabrics, and also a major producer, alongside the US, Japan and Korea. The sector is viewed as something of an El Dorado for Europe’s textile industry, hard hit in its traditional activity by low-cost competition from India, China and Southeast Asia. To catch this added- value wave and gain a competitive advantage, Europe-wide initiatives
are springing up to pool research and development resources. 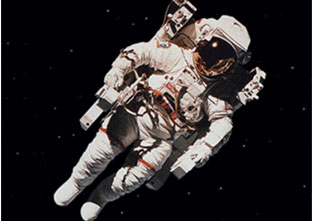 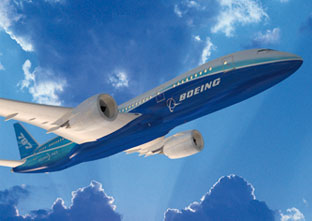 Aircraft manufacturers have become enthusiastic consumers - the Airbus A380 contains roughly 25% of such materials by weight, but that's nothing compared to their use in newer aircraft.

The Boeing 787 Dreamliner is made up of 50% composite. Composites, generally made of carbon fiber or aramide and treated with an epoxy resin, are found in everything from helicopter propellers to the bridges of submarines and the fuel tank of the Ariane 5 rocket.

Boeing says it is largely thanks to its high use of composites that the 787 has become the fastest-selling commercial airliner in history.
Like other aircraft manufacturers, the company was first drawn to composites because of their lower weight and resulting fuel economy.

These characteristics are derived from the physical nature of composites, a mixture of resin and fibres of varying length, providing the part with its rigidity.

Result: the proportion of composites will be 53% of the weight of the future Airbus A350 XWB which will fly in 2013.

And the forward march of composites in aviation does not stop there: industrialists are now seeking to incorporate new functions in composites, such as thermal, acoustic and electrical insulation etc.

At Airbus, for example, research is focused on the incorporation of nanoparticles in composites, which would protect aircraft from lightning.

When fibers are good for your health.

Another sector considered very promising for intelligent textiles is health. For some time now textile fibers have been used to make the little tubes, or stents, that prop open blocked arteries in coronary bypass surgery, or to reinforce torn ligaments. But now the medical technical textile revolution is in full swing with the capacity to weave electronics into otherwise normal-looking, normal-feeling garments.
Italian company Smartex is one of the most advanced. In 2006 it developed a garment able to monitor the vital signs of cardiac patients under the aegis of the EU-funded Wearable Health Care System, or Wealthy, project. The shirt measures everything from body temperature to heart rate and transmits the data to a computer wirelessly. Other applications the company is developing include a glove allowing a person to turn sign language into words and fabric allowing a disabled person to control a wheelchair via subtle weight shifts. Most of Smartex’s garments use yarn made from strands of conductive steel spun together with cotton or polyester fibers. 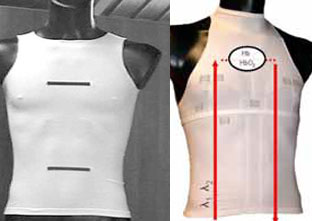 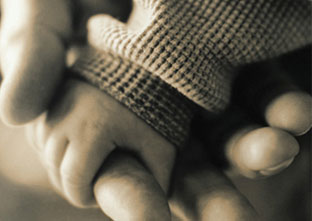 Indeed, one of the interesting aspects of the technical textile revolution is that it requires actors from a wide spectrum of disciplines to join forces in unprecedented alliances. One example is the development of the Mamagoose pyjama suit. Aimed at preventing Sudden Infant Death Syndrome (SIDS), these pyjamas feature sensors that monitor babies’ movements as well as heart and respiratory activity and set off an alarm if danger signs arise while the baby is sleeping.

Their creation by Belgian company Verhaert was born of an alliance involving the European Space Agency, the German Space Agency and the University of Brussels. The biometric and respiratory monitoring applications came to the project through the ESA’s Technology Transfer Programme and were originally used to study the effect of low gravity on astronauts.

The transfer of ESA technology using intelligent textiles played a major role in another EU-funded program called Space2Tex, which took advanced textile technologies developed to support life in space and adapted them to create a new, highly efficient waste treatment system. The idea was to apply membrane bioreactors, or MBRs, capable of recycling 100% of waste water in space to water purification on Earth. The technology is said by project partners to reduce maintenance and running costs by 70% and also to save water and energy.

The Space2Tex consortium groups four European and national associations, 26 textile SMEs from Italy, France, the Czech Republic, Portugal and Germany and four research bodies. The initiative came out of the textile companies’ efforts to reduce their environmental impact (and related costs). The first intended use of Space2Tex technology is to recycle waste water from textile finishing companies, whose activity is highly polluting. 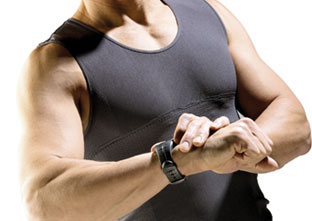 While some fashion designers have experimented with technical textiles to make garments that change color or emit light, for instance, for now the main commercial application seems to be the domain of personal electronics.
The UK is particularly strong in the budding field of wearable technology.

Welsh company G24 Innovations is developing garments incorporating a flexible dye-sensitized solar cell system, licensed from US solar specialist Konarka.
These would allow the wearer to recharge a mobile phone, MP3 player or other devices effortlessly.

Another UK company, Eleksen, has become a world leader in touch sensitive interactive textiles. Its ElekTexTM technology consists of an electro-conductive, flexible fabric touch pad. This figures in a nifty little wireless keyboard that communicates with a laptop via Bluetooth but is small and supple enough to roll up and put in your pocket.

In the world of intelligent textiles, the examples are endless. From fashion and environmental protection to vehicles, homes and health, they are the very fabric of our future. The latest turn of the spinning wheel is a true revolution ! 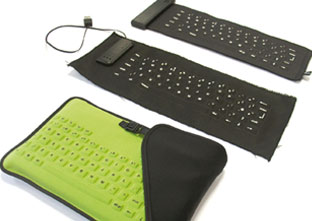