Pinarello is a legendary brand for cyclists. It is however a little less known to the general public. What is its history ?

The brand was created by Giovanni Pinarello over 80 years ago. He himself was quite the cyclist with an impressive list of achievements. He was passionate about technology and began designing his own frames, which naturally led him to create his own brand and founded his own company which he set up in his home region of Catena-di-Villorba in the province of Treviso, Venetia. At the time, bikes were still made from steel and Pinarello became specialised in welding tubes. Production methods were still very traditional at the time. Fame and renown followed in 1960 when a Pinarello bike won the Tour de l'Avenir (Tour of the Future).

Was it to be the first of many ?

Yes, because we won the Giro d'Italia for the first time in 1975 and the Tour de France in 1988. Since then, we have had a string of victories, too many to count. Well, almost. Coming back to the Tour de France, we have won eleven of them so far, including the last two editions. That's something to be proud of! We are currently one of the brands most renowned for its ability to innovate. We have a long tradition of innovation and, in many cases, we even are the precursors.

Can you specify examples of your innovation ?

We have a dual credo: to make bikes that are both comfortable and efficient. We were the first to make frames with square and rectangular aluminium tubes to make them more rigid. Everyone followed our example! That specific example is particularly illustrative of our ability to innovate by freeing ourselves from conventions. When the frame came out, many looked down on us but we were able to demonstrate its effectiveness and thus impose our beliefs on the grounds that technical progress is meaningless until its relevance has been demonstrated in the field.

You were also the first to use carbon*. What reception did your first carbon frames get ?

They were met with great curiosity and great interest! It was the end of the 1980s and everyone was talking up carbon fibres in the cutting-edge industries. Although they were still very expensive at the time, we instantly saw their appeal because they seemed like a material ripe for development for future applications. Initially, we stuck to assembling tubes. It was almost a step back because we had to tame this new material which was completely different from metal. Fortunately, we learned quickly and were able to move forward! From the beginning of our adventures with carbon, we approached Toray, a Japanese manufacturer, a global leader in terms of composite materials. Even though we do not produce the same volumes as the aviation industry, I must say that the engineers at Toray are very attentive to our requests and always offer solutions that benefit us. 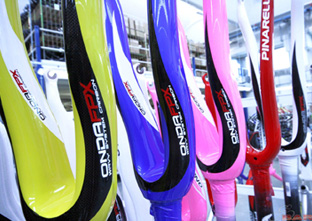 How did it revolutionise your frames ?

First, it is a very rigid and very light material and these two points are necessary for improving performance. However, unlike other manufacturers, that is not our main concern. We are more interested in output. If steel, although heavier, enables us to manufacture bikes with a high output, we would still be using it. This, however, is not the case! Carbon has a significant advantage because it can be moulded. Hand-moulding techniques enable us to use different types of either more or less rigid fibres according to what exactly we want to create. Nowadays, frames are monocoque, which means that they are made up of a single part. If one were to zoom into their structure, we would find that the amount of material used is not the same everywhere. It is pointless to strengthen parts which do not serve a structural purpose. 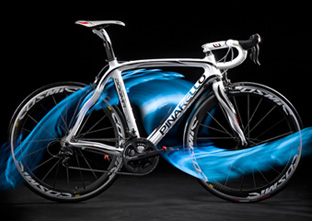 In the same vein, we were the first to offer asymmetric frames. After many studies, we noticed that cyclists exerted more effort on the side with the chain. In order to rebalance these efforts for better performance, we invented slightly asymmetrical seatstays and frames.

Carbon can also be moulded into any shape, even the wildest designs, and I must reiterate that we also aim at making our bikes as comfortable as possible. Making a more comfortable, and therefore safer, bike means fighting against all types of vibrations. Thus, and this is just one example among others, our forks have a slightly wavy shape which serves to better absorb shocks. This also ensures better safety because vibrations cause loss of adhesion and therefore a risk of falling over. Only carbon enables such innovations to be made.

What will the bike of the future look like ?

It's hard to say, but I'm sure it will still be made of composite fibres. For several decades, we have been at the forefront of innovation and that is where we wish to remain. This is why we are constantly on the lookout for new developments and, for the time being, we have not found any materials that could replace carbon. However, the fibres continue to evolve with each new development. The latest productions from Toray are slightly stiffer, which enabled our frames to be even more responsive. Progress is now made one step at a time as we reach a resolutely excellent level of maturity.

Finally, how do you get along with the Sky team with whom you won the last two Tour de France ? 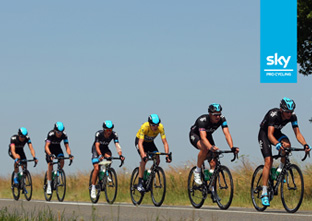 We have a great relationship, of course. For several years now, Sky has been the most prominent professional and, needless to say, it has caught the eye of our competitors. However, Sky continues to trust us and I believe that it is not down to coincidence. We have the same philosophy; we like to look for that little extra that will make us even better. We have established a real partnership between us. They listen to us and we listen to them; it's the only way to go. Our work was richly rewarded in 2012 and 2013. They say that everything comes in threes...We'll find out if that holds true at the Champs Elysées in Paris on the 27th of July this year.

What did you say ? Carbon ?

* The word carbon as used in this article is a linguistic shortcut. Carbon is obviously not used in its raw form to create a bicycle frame or a rocket nozzle. For the bicycles showcased here, it is the assembly of a carbon fibre (the reinforcement) and a polymer resin (the matrix). This combination of carbon and resin belongs to the large family of composite materials.

See similar articles
Read the previous article Predicting the impact of materials beyond humanitarian emergencies.
Read the next article Showa: Perfection at your fingertips