he growing use of electronic products able to transmit all sorts of audio-visual content, in addition to the voice, presupposes the presence of microphones and speakers whose size and cost must be inversely proportional to performance for the purpose of mobility.
The advantage, in this context, of the piezoelectric effect is that it can be reversed. Actually, the vibrations of a membrane can be transformed into an electrical current in order to reproduce a sound, it is possible - and often necessary - to use the electrical impulses to make the membrane of a speaker vibrate.
After having proven themselves in the area of sound recording, electroactive polymers can now be used to reproduce it. This is why major plastic film manufacturers have already started production. 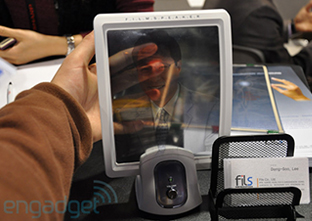 In 2013, Japanese firm Fujifilm unveiled the first flexible speaker made from a PVDF film containing ceramic microparticles. The company's Korean competitor, FILS, already has a presence in that specific market thanks to partnerships with the peninsula's leading companies. 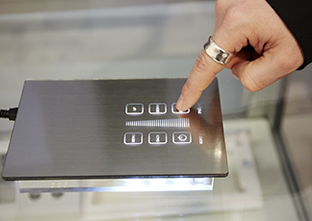 Sensitivity, which is conducive to good social relations, is a quality sorely lacking in electronic interfaces. The specialists of haptics, the science of touch, have set out to remedy this problem.
This area, one of the most promising in terms of innovation, could represent a market of over 45 billion Euros in 2018. And mastering electroactive, or rather, electrosensitive polymers is indispensable for those wishing to capture a share of this substantial windfall. Simply because these plastics, able to deform under the effect of an electrical current, were immediately designed for the manufacture of new sensitive interfaces.

Touchscreens reach for the skies

In 2011, German manufacturer Bayer unveiled its ViviTouch, a vibrator for mobile phones, smart phones and game controllers, developed from a silicone-based electroactive membrane.
The Novasentis startup uses the properties of PVDF derivatives for other interfaces. In particular, it developed a flexible touch keyboard that is as thin as a sheet of paper, Novasentis also proposes to integrate micro-actuators able to produce all sorts of vibrations into the straps of connected watches. The Finnish Senseg company uses the piezoelectric properties of a polymer film able to mimic various textures. The creation of Braille interfaces for the blind is one of the priority applications for this process. However, some companies are already aiming to develop more sophisticated simulation. The Disney Research laboratory, for instance, has developed a touch screen that can simulate the 3D geometry of the displayed objects.

Automotive design declares the war of the buttons 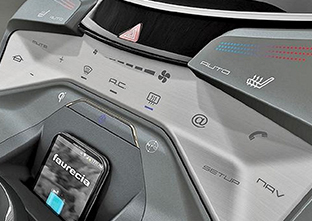 uel gauges, speedometers, power windows or de-icing systems… the list goes on! Cars are one of the objects containing the most sensors and actuators.
Given that seamless integration of the corresponding interfaces is currently considered a must in automotive design, Faurecia decided, in 2014, to make the move towards haptic technologies.
The aim: consigning all buttons and knobs to prehistory and integrating new touch interfaces into the decorative parts of the car's interior.
LThe controls are visible on a facing sheet available in various finishes, metal, wood or plastic, and which is microperforated to allow the backlight to shine through. Under the touch overlay is a layer of polycarbonate that guides the light emitted by the piezoelectric components printed onto or encased in a polymer film.

The whole thing is less than 10mm thick. A simple press of around 2 newtons activates the component that emits the light signal and the vibration corresponding to the passenger's action.

Electroactive polymers for the wings of the future

The airplane was invented by imitating birds. This process is still very much used by the specialists of "morphing" who take inspiration from birds' wings to improve the wings of airplanes. Researchers at the University of Toulouse, in collaboration with Airbus, are particularly interested in two characteristics: the ability of the wings of large birds to deform in real time, and the role of the small side feathers.
Their approach is original in that it consists of combining the two phenomena by combining various electroactive materials in the wings of aircraft.
In order to enable the wing to deform based on flight conditions, the engineers designed a structure combining the effects of a "Shape memory alloy" that is capable of large but slow deformations with those of actuators made from PZT (Lead zirconate titanate) ceramic that induce small deformations, around a millimetre, at a faster pace.

The electroactive polymer that completes this device has a dual role. The flexible strips of Polyvinylidene fluoride (PVDF) placed on the trailing edge, much like a bird's small feathers, absorb turbulence and thus improve the wing's aerodynamic efficiency. In addition, their vibrations provide a portion of the electricity required to deform the structure.

When flying fish will swim in the air

o, this is not the title of a surrealist poem! It is the challenge that the Swiss researchers of the Empa, the Swiss Federal Laboratories for Materials Science and Technology, led by Silvain Michel, have been trying to solve since 2007.
Noting that a trout propels itself in the water with ease and without tiring, by flexing its body and its tail in opposite directions, they bet that this movement called "flexion rotation flapping" could be transposed from water to air on airships whose envelope is made of an electroactive polymer.
Alternating activation and inactivation of the polymers would deform the surface of the envelope and enable it to move forward in the same manner as trout in water.
CThis method of propulsion would also provide excellent manoeuvrability. In addition, the large size of the envelope provides enough space in which to place the flexible photovoltaic cells needed to activate the piezoelectric components.

Read the part 1 Electroactive polymers, materials with high potential
The feature's sections
Share this article
Subscribe to our newsletter
Register
See similar articles
Read the previous article Robots go for plastics
Read the next article An invisible revolution inside plastics