CHEMISTRY AND TEXTILES – A CLOSE-KNIT PAIR

The chemical and textile industries first joined forces in the late 19th century to meet a growing demand.
This was because use of natural fibres alone was beset by problems of uncertain production volume and quality.
The development of artificial fibres like viscose with more regular yarn and, from the 1940s, petroleum-based synthetic fibres, overcame these obstacles, bringing a wider range of cheaper textiles with more varied properties.
The prospect of a world population reaching eight billion people by 2025 is another good reason for upping the production rate of synthetic fibres. The current challenge, though, is not now just about producing even more acrylic, polyester, polyamide or nylon ... 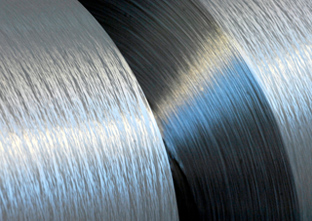 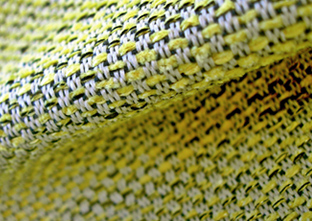 To stay competitive, manufacturers have to come up with new fibres that meet people’s new demands for being on the move, healthy and feeling good. It matters little whether these fibres are natural, synthetic, bio-sourced or mixed, provided they are multifunctional, energy efficient and easy on raw materials; and if they can also be recyclable, well... 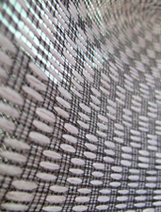 “Artificial” fibres are formed by the extrusion of polymers derived from natural materials like cellulose, used to produce acetate, viscose and Lyocell. In this respect, they resemble so-called "bio-based" plastics.

Synthetic or chemical fibres like acrylic, polyester and polyamide are also created by extrusion of polymer melt, usually derived from petroleum. Some synthetic fibres may be biobased – polyester, for instance, is also manufactured from ethylene derived from sugarcane.

The fabric of the future ?

Textiles and the textile industry have always been footloose, with production facilities, from spinning mills to garment factories, moving where the opportunities arise.
The textile sector’s flagship product in the fledgling consumer society, synthetic fibres, are now helping to drive prosperity in emerging markets.
Even so, the old industrial areas may have found a way to re-energise a sector profoundly destabilised by globalisation. If you can break down physical borders, why not technological ones too? Without calling time, on its long-time marriage to the chemical industry, therefore, the textile industry is now wooing nanomaterials and information technology. The aim? To add new properties to textiles, not just through finishing treatments, but at the point of fibre creation, weaving or even earlier - upstream at the polymer development stage. 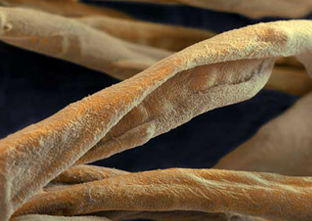 The ways textiles interact with the human body are a priority focus for the development of functional textiles. Most European research hubs in fact are collaborating on joint projects on polysensoriality and wellbeing connected with sport, activity, health or aging. 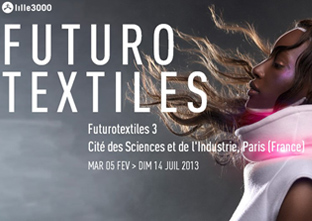 The joint opening, in Lille, in 2012 of the third Futurotextiles exhibition, before moving on to the Cité des Sciences in Paris, and the new European Centre for Innovative Textiles (CETI) in Roubaix, owed nothing to coincidence.
This travelling exhibition, created in the heart of a region particularly hard hit by the textile industry crisis, was in fact designed to showcase the regeneration of European textiles in the fashion, design and technology fields. Its collection of textile articles gives a peek at the fashion-forward market trends displayed each year at the industry’s big international gathering – the Techtextil trade fair in Frankfurt. 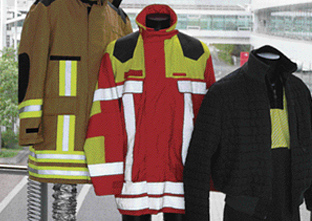 Engineers and designers on both sides of the Rhine are competing to find new and clever ways to combine fibres, innovative technologies and materials. All have the same Holy Grail in view – light, recyclable technical textiles for the home and transport; feelgood clothing in the broadest sense - lingerie, outerwear, technical, sports or medical - now focused on how the body interacts with its environment.
But because it’s also all about the look, the design has to be there. It’s out of the question to have patches, microfibres or cosmetic, antibacterial or temperature control encapsulation processes visible on the textiles on show at the Techtextil 2013 stands or the Futurotextiles 3 showcases...

When not redesigning fashion: like Yohji Yamamoto, with his inflatable vinyl gown, or Gina Lee, with her shape memory fabric, designers may focus on developing the properties of these innovative textiles, like artist/designer Helen Storey’s catalytic dress in a sand, cement and titanium dioxide-impregnated polyester-silk fabric that breaks down pollutants in the air.

Nanomaterials – the warp and weft of fibres...

Nanotechnology allows an array of new properties to be added to textiles. Nano-coating of polymeric membrane microcapsules entrapping a substance is, by far, the most common method, especially for manufacturing cosmetotextiles.
First heralded in the 1990s, this marriage of fashion and beauty has struggled to make headway. The setbacks of pioneering products like Hermes’ scented silk square scarf, or Dim’s moisturizing tights, left many questions unanswered.
But as the range of active ingredients, that can be microencapsulated, increased, women began to latch on to the idea, and it spread to other body-hugging fabrics like slimming leggings or jeans, moisturising body stockings, or cleavage-boosting bras. 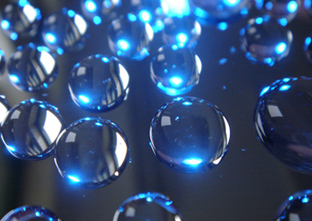 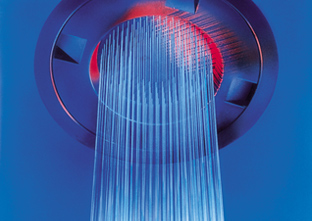 Initially applied to semi-finished textiles at the finishing stage, nano-coating has gradually become more advanced with pre-weave microencapsulation of fibres.
Into this booming market is emerging a third generation of cosmetotextiles with microcapsules embedded into the extruded synthetic or artificial yarn. It is a technique that ensures greater durability to washing. The addition of embedded inorganic oxides also delivers wellbeing-protective or body-contouring effects similar to so-called "bio-active" textiles for health and sports use. 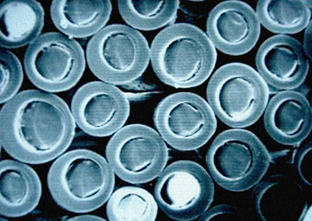 Does the industry’s interest in textiles that actively cool wearers down suggest planning for climate change? You never know! Whether or not, the temperature regulating textile pioneer Damart is breaking into this niche market. "Too hot? I’m cool!” is the new slogan chosen to launch its Ocealis t-shirt in 2013. Millions of xylitol microparticles grafted onto the fibres open up to act as little bubbles of coolness. As the body heats up, the sweat dissolves the substance to actually lower the temperature of the skin.
To get this type of reaction, other manufacturers like Outlast in the US have gone with spinning bi-component fibres, a technique that consists in extruding different polymers, without mixing, to combine their respective properties. It also allows phase-change materials (PCM) that can store or release heat depending on the ambient temperature to be embedded in the core of a viscose, acrylic or polyester yarn without resorting to microencapsulation.

Even more groundbreaking in the same field is specialist-knitted fabrics company Sofileta’s development with Belgium’s Luxilon Industries, of a revolutionary fibre whose cooling-down properties rely neither on the use of phase-change materials (PCM) nor filament composition but on the structure of the base polymer. Its alternating hydrophobic and hydrophilic molecules that provide both perspiration transport and thermal conductivity simultaneously mean that it works as a pump, absorbing body moisture and releasing a cooling effect. This polymer yields knittable yarns for sportswear which, following lab testing, have been tested and found to work by professional tennis players and cyclists. 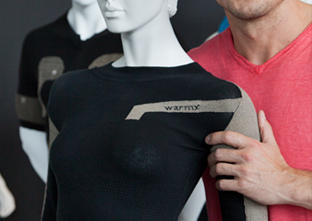 What has wowed the sportswear market about elasthane - the iconic product behind the trend for stretch fabrics - is its elasticity.
Manufacturers have built on that to develop bi-elastic fabrics whose big asset is an ability to stretch in multiple directions, making them cling even more tightly to body movements and producing a highly noticeable "second skin" effect.
Looking beyond comfort, these textiles have valuable performance properties. Through muscle compression, they stimulate blood circulation and improve oxygenation, which are beneficial during effort and recovery. They also provide better muscle support, which reduces vibration and hence energy loss and the risk of micro-injuries. 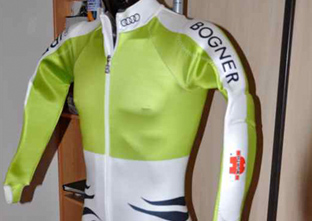 Other polymers can combine the beneficial action of muscle compression with the properties of bio-ceramics. The company HT Concept has developed a bi-elastic polyurethane membrane containing volcanic metal microparticles that collects infrared radiation. This is laminated onto the textile and then applied using body-mapping to target the body areas under most strain.

Long used for felt hats and Mongolian yurts, non-woven fabrics have made a surprising comeback thanks to synthetic fibres. The technique is a highly effective means of shortening the fibre conversion stages to yield a web of fibres bonded by friction, or adhesion without machine weaving or stitching.
Mostly used to manufacture disposable hygiene, medical care or filtration products, environmental concerns are now driving non-wovens to aim for a longer life. The construction and composites industries are already using them as structural reinforcements and coatings. Better yet, nanofibres-based reflective non-wovens can increase the reflecting power of public lighting by 40%. Others, based on so-called "fragmented" fibres, have a "Velcro" effect that makes attachment to surfaces easier.
Setting the seal on their success, non-wovens of submicron size fibres have cracked the activewear market in the making of flexible and breathable body-hugging clothing.

The rise of synthetic fibres in the textile industry has not only optimised spinning and weaving processes, but also revolutionised clothing manufacture itself.
Not going quite so far as non-woven technologies, seamless techniques are used to manufacture T-shirt and sweater bodies as continuously woven tubes, with no side seams for example. This is accomplished using circular looms to produce tubes of varying dimensions.
Two other techniques are used to manufacture seamless articles. One, used for making underwear, is ultrasound, where the vibration caused by the sound waves converted to heat is used to assemble the parts together.
The other method is heat sealing: by doing away with elastic, this technology gives flat-laying edges for no-show underwear – which has, presumably, prompted the surge in popularity of “near-commando” smalls! 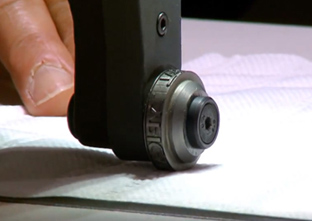