Intense heat or polar cold: temperature is their business

Polymers heating up the cold war

In the 1950s, NASA and the U.S. Air Force's laboratories researched into polymers that could be used as matrices for high temperature-resistant composites to replace metal parts unsuited to the performance requirements of future military aeronautics and spacecraft.

The researchers first focused their efforts on polyimide resins, used since 1942, for the earliest laminate radomes, and improved in the post-war era by DuPont de Nemours. 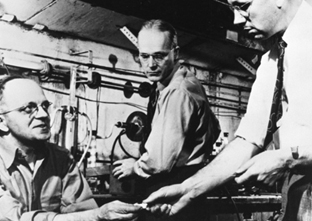 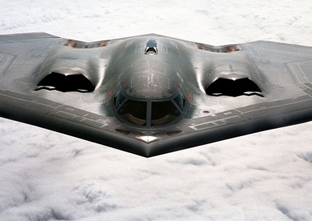 Research into alternatives outside the United States resulted in the development of fifty-odd other polymers with operating temperatures around 300°C. Thirty of these got no further than the experimental stage due to difficulties in using them. Some respected scientists pushed forward with high temperature materials for limited lifespan military applications like missiles.

The others are now competing in areas more promising for industrial applications on the basis of more targeted standards and criteria: production and implementation costs, long-term temperature resistance and mechanical strength, recyclability, etc. 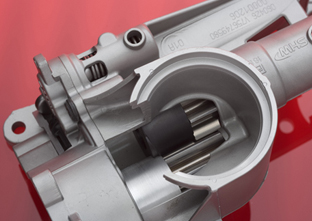 All plastics begin to degrade before reaching their melting point - the point of transition to a liquid state. Their molecules enter this "turbulence zone" at the "glass transition temperature" (Tg). This is a key criterion for choosing the right polymer.
For most plastics, this critical point lies between 100°C and 200°C, a level that will stand up to ordinary uses without risk of deterioration.
Some, however, preserve their potential at much higher temperatures, sometimes up to 350°C. The best known of these is PTFE, more commonly known as Teflon, used in frying pans for its anti-adhesive properties.

Costlier than commodity plastics, these organic polymers are themselves now in competition with other inorganic matrix composite materials usable in the 1000°C zone that has hitherto been the preserve of ceramics. 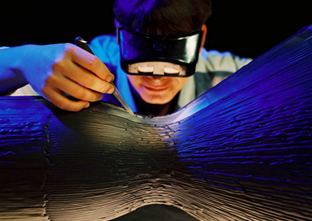 A new look for fire-fighters 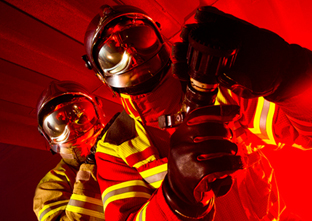 Thermostable polymers are crucial for applications demanding resistance to high temperatures or fire. Polyamide fibres from the meta-aramide family, like Kermel used in protective clothing, are a case in point.
This fibre, developed in the 1960s, was originally intended for military use. Being non-flammable and stable at temperatures above 400°C, it was first used for armoured vehicle crew clothing before being taken up by fire-fighters.
Since 2007, French fire-fighters have been replacing their problematic leather clothing with more body-hugging, breathable turnout clothing made from fire-resistant polymer fibres! 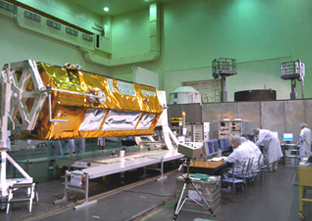 Some plastics have good resistance to continuous fire exposure, but how do they cope with thermal shock? Here again, some thermostable polymers have become materials of choice thanks to their resilience to high temperature exposure and sudden temperature variations.
Temperature changes are a big problem when it comes to structural elements, wings and the fuselage of aircraft or spacecraft.
A case in point is the materials used for satellite antennas, reflectors or structures exposed to temperature variations between -180°C in the shade and 160°C on exposure to the sun. Replacing light metal alloys in these conditions is no easy job! But it can be done with epoxy or bismaelimide matrix carbon fibres.
Using these organic composites on an Intelsat 5-type telecommunications satellite yields a weight saving of about 4%, or 9 kg, which can be used for communication circuits.

High performance polymers are not only used in aeronautics for structural components and on-board equipment but for engine parts too.. The jet engine air inlets on Airbus-type civil aircraft are now made of bismaleimide resin composites.
Similarly, because air friction alone frequently causes the surfaces of military supersonic aircraft to heat up to 250°C, manufacturers are now using these organic resin composites to account for at least one third of their aircraft weight. So, most of the coating on the Lockheed Martin F-22 Raptor is composed of carbon fibre-bismaleimide composites which not only perform well at high temperatures but also absorb radar waves and provide stealth. 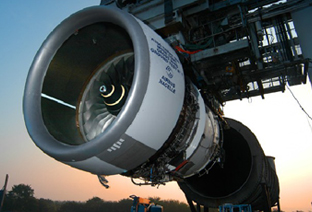 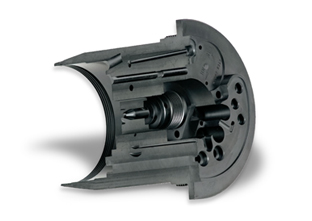 If you use the polyaryletherketones (PAEK) family, and you want resistance to high temperatures, fatigue, wear and chemical attack...then polyetheretherketone (PEEK) is the right choice for you! It is without doubt, the “now” high-performance thermoplastic.

It offers the best combination of properties at high temperatures (up to 310°C) and has excellent chemical and hydrolysis resistance. In addition, its biocompatibility has found medical uses as a replacement for titanium in prostheses. Its only flaw is that its service temperature is very close to its degradation temperature, which makes PEEK difficult to handle and therefore more costly to process.
Ways are being looked for to address this issue. Mixtures of PEEK and liquid crystal polymers (LCP) have been successfully tested at Paris’ École des Mines school of mining engineering, for instance.